Boston University School of Music Opera Institute’s run of Benjamin Britten’s Albert Herring opened Wednesday at the Robert J. Orchard Stage in the Emerson College Paramount Center, as a cast of high level undergraduates and graduate student realized one of Britten’s serious comic operas. Somehow, its evocation of existential British suburban dread and the changing of the eras at the turn of the 20th-century seem quite relevant to the roiling and vitriolic age of change we are entering now.

The story itself is rather simple. At the turning of the seasons in a small fictional Eastern Suffolk town of Loxford, the older generation seeks to draft one of the youths to be Queen of the May. Finding promiscuity and vice gripping all the ladies, Lady Billows (with her handmaiden Florence Pike), Mayor, constable Superintendent Budd, Vicar, and schoolmarm Miss Wordsworth enlist the help of the simple boy Albert Herring. Despite wanting to be like his friends Sid and Nancy, the two most normal of the townsfolk, he helps his mother run a grocery and stays out of trouble. Outwardly, the lot upholds the moral Christian values they espouse; secretly, they’re vain drunkards, promiscuous, and spiteful, hence, perfect representation of what they seek to suppress. In a ceremony at the shop, the entourage nominates Albert to become the King of the May, something Albert desperately does not want. Everyone ignores Albert’s despair and suffering, except for Sid and Nancy, who play a trick and spike his lemonade with rum to loosen him up. That night, Albert gets far drunker and overhears Sid and Nancy talking about him. In anger and desire to know the world, Albert takes his 25 shillings given as tokens for the King of the May and goes to the nearby town to drink up a storm. The next morning, he doesn’t return. The townsfolk find only his destroyed straw hat, making them believe he died. As they mourn the loss of “innocent, simple” Albert, he comes through the shop doors, blood on his shirt and covered in dirt. After telling off the town stooges, he celebrates with his friends, having finally cast off the old town chains.

The story encapsulates the social oppression of the Victorian age quite nicely. The townsfolk are masks of their own vices, meaningless in the grand scheme of life, and as stage director Crystal Manich writes in the accompanying program note “Light, Dark, Funny: The Nature of Albert Herring,” “…there is a sense that if these people were to go into the wider world (say, London), they would not be as important or high standing as they think themselves to be.” Albert, portrayed wonderfully by Dennis Shuman in the Wednesday/Friday performances, exudes a desire to transcend this small-town nothingness, acting as the Britten tragic hero, one that does not falter as someone like Peter Grimes did but that struggles against the modern British system. It’s as much about the masks of the town elders as it is ripping them off with Albert’s hand grabbing at them.

Performers on the Wednesday performance were, for the most part, quite good. Julia Wolcott as Lady Billows deserves special recognition. Her stage presence drew all attention to her as the vain town rich lady in any scene she was in, carrying herself with comic pompous wit. Her voice also managed to push through some of the inherent dryness of the Paramount Center, resonating in the space far better than her colleagues. Shuman had a wide expressive range, conveying Albert’s dread and desire perfectly, especially in the crowning of the King of the May scene. Erik Earl Larson as Sid powered through his lines with a thick baritone voice, improvising as needed when some props decided they did not want to cooperate with him (a set of round tins of spices rolling around on the floor comes to mind). Isaac Kim as Superintendent Budd played the basso buffo role effectively, always maintaining an air of self-importance and style that never crossed over into Lady Billows territory. In the chorus of the elders, though, sometimes, the very noticeable voice Kyu Young Lee as The Mayor cut through the blend, in what should be (as noted humorously by the superscript text projected above the stage) complete chattering chaos.

The Boston University Chamber Orchestra, led by the strong and decisive William Lumpkin, provided the accompaniment, single instruments on parts. It made the scoring rather intimate, a smart choice for something as small and close-knit as the Loxford setting. The only issue was that it kept several parts very exposed, and it made the rare mistakes noticeable, especially in the French Horn; overall, the playing was high level.

The fairly plain costuming dressed everyone in end-of-the-era Victorian garb that fit the era. It was not wide-reaching in scope, but it communicated the small-town nature and relatability of the characters. The far more imaginative staging, set in a series of hollow square scaffolding around the stage platforms, evoked small town houses and flats lined in rows. We felt like Peeping Toms, peering in through the neighbor’s houses to watch the personal drama unfold. 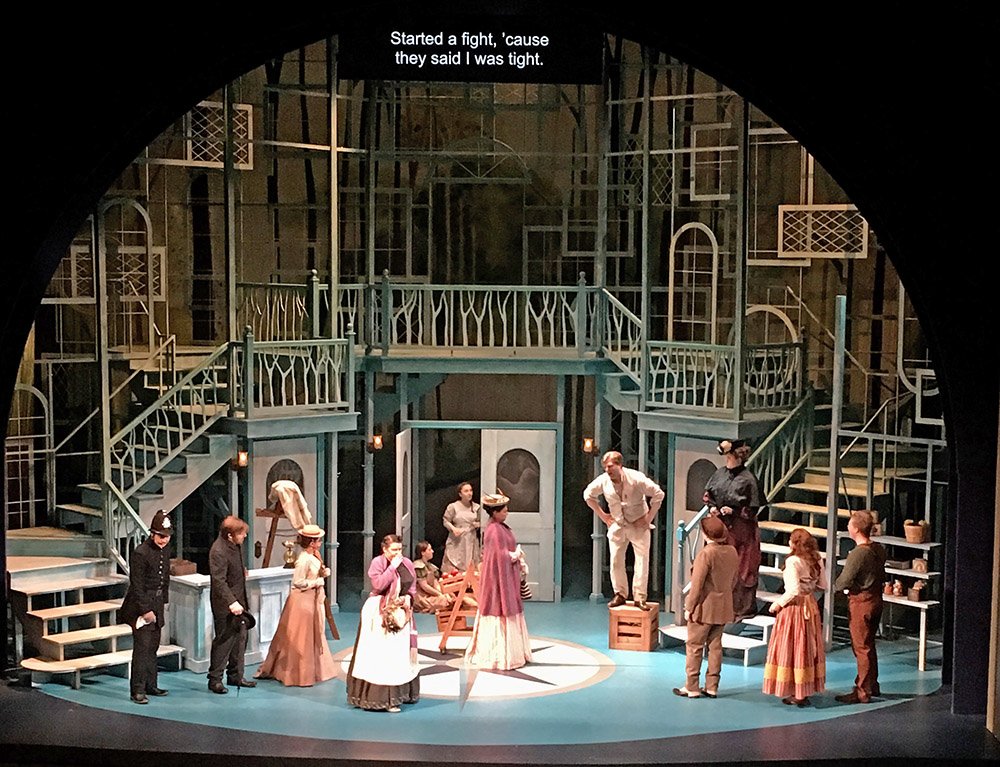 Kudos to the team behind this effective Albert Herring. Depicting how late-Victorian life can life mirror our own, gives this production its flair. The production continues its run Friday, and Saturday at the Paramount.