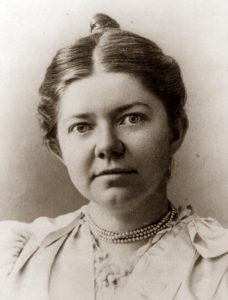 The Award event is not to be confused with the earlier, full-length Nobel Prize Concert. At the Nobel Prize Awards Ceremony, where the laureates receive the Nobel Medal and Diploma from King Carl XVI Gustaf, several shorter works of music are usually performed within the ceremony.

We have had the opportunity to hear several of Beach’s most important works in recent months here in New England (as reported by BMInt), but Beach’s music also has been winning performances further from her home turf, with performances of the Symphony in the UK, Iceland, Switzerland and Estonia, and Royal Stockholm Philharmonic Orchestra recently performed the brilliant Piano Concerto, op. 45.

Beach is often discussed as part of the movement to develop a national American musical style in the late 19th and early 20th century, but recent scholarship by Sarah Gerk (mentioned HERE) places Beach’s Symphony in a broader cosmopolitan and transnational movement, one showing interest in a rich multiplicity of music cultures. And what could be more international than having her Symphony, titled “Gaelic,” the movement titled Alla Siciliana, performed by a Swedish orchestra, and conducted by a Portuguese musician, as part of a ceremony that will be viewed by millions worldwide. The conductor Joana Carneiro is Music Director of the Berkeley Symphony (where she succeeded Kent Nagano), and also conducts the Orquesta Sinfonica Portuguesa, and frequently guest conducts the Gulbenkian Orchestra.

Amy Beach’s Symphony was premiered by the Boston Symphony Orchestra in 1896, making her the first American woman to have a symphony performed by a major orchestra. She wrote the work while living at her Boston home, 28 Commonwealth Avenue. While she lived in Boston, as the wife of Dr. Beach, she did not have the opportunity to travel. As she later wrote, “… my home life kept me in the neighborhood of Boston. My compositions gave me a larger field. From Boston, I could reach out to the world.” But following the death of her husband in 1910, Amy took up travelling and resumed the career as a concert pianist that had been curtailed by her marriage. She performed her own piano concerto in Germany, for instance, in Hamburg in 1913 where it was paired with her own symphony.

New editions of the three largest Beach works including orchestra—the Mass, op. 5, Symphony, op. 32, and Piano Concerto, op. 45—may propel more performances. Previously performers had to use copies of manuscript materials, which could slow rehearsal time considerably. The Royal Stockholm Philharmonic Orchestra gave the first performance from the new edition of Beach’s piano concerto in August (the recent one by the Brandeis-Wellesley Symphony was the first U.S. performance of the new edition. That edition is published by Subito Music, and edited by the New York-based conductor/scholar Laurine Celeste Fox, and received financial support from Women’s Philharmonic Advocacy, which also supports the website www.amybeach.org, and has produced the new edition of the “Gaelic” Symphony). The performance of the Concerto by the RSPO led them to consider the Symphony for the Nobel Awards Ceremony.

Since it is the season of giving, Women’s Philharmonic Advocacy is having its annual fund-drive here. BMInt readers may be particularly interested in the full color 2018 Calendar, offered as a perquisite for any gift over $20. Our calendar is beautiful and full of fascinating and carefully researched information about many women composers!