The quotes were superlative. New York Times noted “deep reserves of virtuosity and irrepressible dramatic instinct,” the L.A. Times praised “balance of intellect and expression.” Then there was the $100,000 Grand Prize this young ensemble won at the inaugural M-Prize International Chamber Music Competition. Yet despite high-set bar, the Calidore String Quartet managed to exceed expectations when it made its Boston debut [BMInt reviewed the ensemble’s recent Concord debut HERE] on Sunday at the Isabella Stewart Gardner Museum’s Calderwood Hall in a program of unabashed classics, with attendant risks and rewards. In this opportunity to stun a packed house of connoisseurs or bore them, the Calidore forcefully stuck to the former. Rarely does a young prize-winning group make such a mature and deep impression. I left the Gardner with my jaw agape.

The Calidore plays with flawless ensemble. The care with which each member matches pitch, sound quality, vibrato, and a sense of phrase, sounded far more rehearsed, familiar, and natural than befits a seven-year-old ensemble. Their philosophy of rhythm predates the indulgences of the ‘80s and ‘90s—when musicians and ensembles erroneously came to believe that a sonata has more than one tempo—so when they took time expressively they were always sure to get it back, and this consistency energized their rhythm which in turn further strengthened the ensemble. The afternoon’s first chestnut, the Quartet in D Major, Op. 64, No. 5, “The Lark” (1790) by Joseph Haydn, highlighted these qualities. Refined details abounded. Second violinist Ryan Meehan brought tonal depth to Haydn’s simple accompanimental phrases, using more bow speed than weight for a light and resonant tone. First violinist Jeffery Myers burned through the perpetual motion finale at breakneck speed. But cellist Estelle Choi deserves a special note here. Haydn quartet performances are truly only as good as their cellist—the musician that, in Haydn’s works, plays the role of both bassist and drummer—and Choi’s rhythm and intonation were flawless, with superlative tone to spare.

A quick explosion began Mendelssohn’s Quartet in F Minor, Op. 80 (1847), followed by taut, relentless rage. The players’ flawlessly synchronized articulations, pizzicati, and subito fortissimos and trilled the finale’s 16th-note passages with a powerful otherworldly boil. In a short talk describing how Mendelssohn poured his grief over the loss of his sister Fanny into this quartet, his last, violinist Ryan Meehan rightfully emphasized the beautiful slow movement, but when it came time to perform this profound work that sits beside late Beethoven, the ensemble at last showed they have room for improvement. A bit more space in tempo and a touch more flexibility might have brought more tenderness. First violinist Jeffery Myers often selflessly recedes into the texture, sacrificing individual virtuosity for ensemble clarity, texture, and tone. Most of the time this approach works brilliantly, highlighting the group’s tightness, but moments like this transcendent slow movement need a single voice with a strong subjective presence to weep with gentle nostalgia, wax passionate, and contemplate final things. 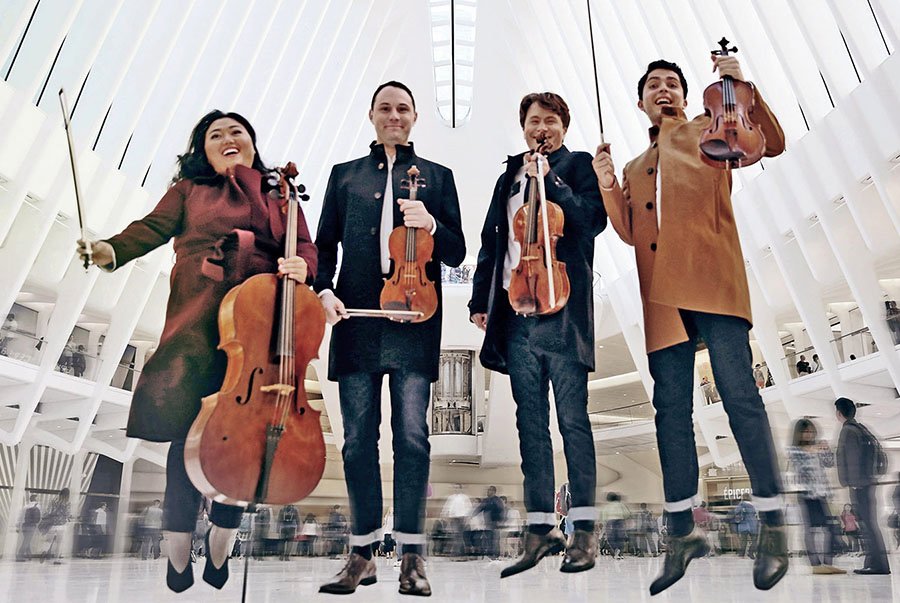 I had only to wait until after intermission to witness Means’s coming into his own, in the Quintet in G Major for Two Violins, Two Violas, and Cello, Op. 111 (1890) by Johannes Brahms, joined by the Curtis Institute President (and excellent violist) Roberto Diaz. Choi’s opening solo was intense, but poised and light on its feet. The beginning of the first movement development section arrived with a sense of chilled mystery. Diaz brought clarity with his articulation and drive with his rhythm. And the group effortlessly dispatched this piece with perfect intonation, an impressive feat for a work which commonly suffers from pitch problems. Jeremy Berry’s solo to start the second movement—a performance deep and weighty with wide stentorian vibrato—was but one of many great moments for the quartet’s violist. This Brahms, wild and passionate as it was technically spectacular, stole the show.

I look forward to seeing what this great young ensemble brings next to Boston. The Gardner should be sure they book their flights.

Matthew Heck is a musicology doctoral student at Brandeis.