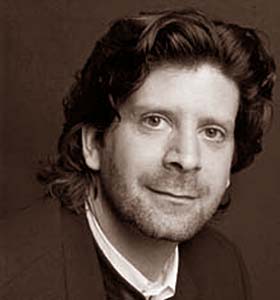 Barry Shiffman makes his Rockport debut as artistic director/performer next Sunday, when he take to the stage with the Ying Quartet and Zuill Bailey for a juicy program ending with Brahms’s String Sextet No. 2, one of the more engagingly chewy works in the chamber repertory. I’ve never heard a bad performance, and with the company Shiffman is keeping, the auguries are in ascension for a memorable interpretation.

FLR: How does a shy violist fit in with a big personality such as cellist Zuill Bailey and an almost 30-year-old quartet that is getting a fifth and sixth wheel?

BS: Shy? I come from a family of eight. If you are shy, you don’t eat…

I have known Zuill and the Ying Quartet for decades. Not only are they extraordinary colleagues, they are dear friends. Recently I had the opportunity to perform the Brahms Sextet with Zuill and the Cypress Quartet. We actually recorded both of the Brahms sextets and it was great fun. The Ying Quartet and I met at the Banff Centre in 1992. As a member of the St. Lawrence Quartet we toured with the Ying yearly and performed countless times together, which always included a program of quintets, sextets and octets, and the Brahms was one of the works we toured. You are right to point out that these wonderful musicians are big personalities, and my experience has taught me that making music with confident personalities like the Ying and Zuill is actually a much easier environment in which to create than others.

Sometimes festival performances take place on a wing and a prayer. How many rehearsals have you planned for the Brahms? You’ve all probably played it many times.

The Ying Quartet and Zuill actually recorded the Schumann Concerto, which they are performing, and have played it numerous times in concert, so the rehearsal the day prior is all they will want. The Brahms will enjoy a full day of rehearsal on the day prior to the concert and a significant rehearsal on the morning of the concert. In truth, we could all sit down and play the work without rehearsal, as we have played it so many times, but the rehearsal process is the fun part. It is not just about cleaning up things for the concert, but allows for the interchange of new ideas, and we love that. We have a full day planned on Saturday, which will be followed by a nice long meal Saturday night. We have been looking forward to this weekend for a long time.

Zuill will be soloing in a version of the Schumann Cello Concerto with accompaniment reduced to string quartet. Who made the reductions and when? And why don’t you sit in, since doubling the viola part is to everyone’s sonic advantage. Maybe all string quartets should have two violas.

Ha-ha. Violas are like a good spice. The right amount and it raises a dish to new heights. Too much and, well, you know how that can go.

As I understand, Schumann had intended to create a version for string quartet and cello solo, but that never happened. The composer Philip Lasser did the arrangement that we will present, and worked closely with Zuill throughout the process. I think the audience will have a much more intimate experience with this work. The interchange between solo and “orchestra” is simply more flexible with the quartet. Zuill has a freedom in playing with this small group of his friends that does not exist with a large orchestra. There are orchestral sonorities one may miss in this version, but there are so many artistic choices now possible in this new version that for me it becomes a new work.

When I heard their recording of the concerto in this version, I found it so beautiful I was excited to share it as part of the concert.

How did the commission for Christopher Theofandis’s concert opener, The Conference of the Birds come about? Can you point us to some relevant YouTube examples of his work? I assume it’s a string quartet.

A good list of examples of his work is here.

Chris Theofanidis was commissioned by the Ying Quartet with funds from the Institute of American Music. The Ying were eager to share this work in Rockport and we are all excited to present it to our audience. The Ying have such a long history of commitment to new music, and having seen them perform many new works, I trust them completely.

After playing over 2000 concerts in the St. Lawrence String Quartet over 17 years, you became a “well-respected musician, educator and administrator,” but just because you traded Palo Alto for Toronto doesn’t mean that you have put down your violin and viola or that you have somehow chilled out. Can you be as passionate as an administrator, artistic director and educator as you have been as a performer?

I moved from the St. Lawrence Quartet originally to the Banff Centre, in Alberta, to direct the music programs there, and after several years in Banff moved to Toronto to work at the Royal Conservatory. I feel so lucky to be totally immersed in music and the arts. My days involve teaching, performing, raising money for emerging artists, planning concerts and festivals. The ownership that one feels when performing onstage is something few people get to realize. It is intensely personal, and you cannot succeed without giving 100% of yourself in the performance. I try to bring that sort of commitment to my work in administration. I feel that what I am doing in this area is helping lay down the foundation for the future and as I am working on a daily basis with some of the finest emerging artists of our time, I feel responsible to them to do my best to help them have the type of opportunities I have enjoyed. What was so exciting about this opportunity at Rockport is that my love of music and concern for the future are shared by so many of our supporters. David Deveau built a following of seriously dedicated music lovers.

Of course it’s the job of a journalist to compare and contrast you with your beloved Rockport predecessor. From the six concerts you have booked for Rockport’s Winter Season, I can deduce no grand plan or departure. Respected and upcoming performers spanning 400 years of repertoire seems to sum it up. Will some imprint become apparent? Do you feel you have a good marketing sense for the preferences of your audiences?

My goal in planning the concerts for the fall and winter was to offer a wide range of programming in the classical arena that brought in many new faces to our stage. In truth I don’t engage too much in the marketing of the concerts as we have such a good team in that area. It is no small task to earn the trust of the audience. To do that, I believe you have to first of all be honest to yourself. When I choose to present a concert, it is because I believe in the artists. I have many conversations with our audience and they are not shy to share their likes and dislikes. I want to hear from them and want to have the opportunity to discuss my vision with them. Rockport Music is really like a big family, and they have warmly welcomed me into their home.

I was so pleased to see how they embraced the first couple of concerts of the season. Just last month we had a near capacity audience for the extraordinary violinist Jin Joo Cho and pianist Hysun Soo Kim. These artists were not known to our audience and I was concerned as to how well the concert would be attended. The near capacity crowd was on their feet and seeing them react enthusiastically to these young artists was so wonderful.

In the summer festival I think there is much more opportunity to have a more definitive artistic stamp on the programming. By the nature of the festival format, more thematic programming is possible. I have promised my team not to share any news of the summer festival programs, but what I can say is that I am really excited to see how it has all come together. 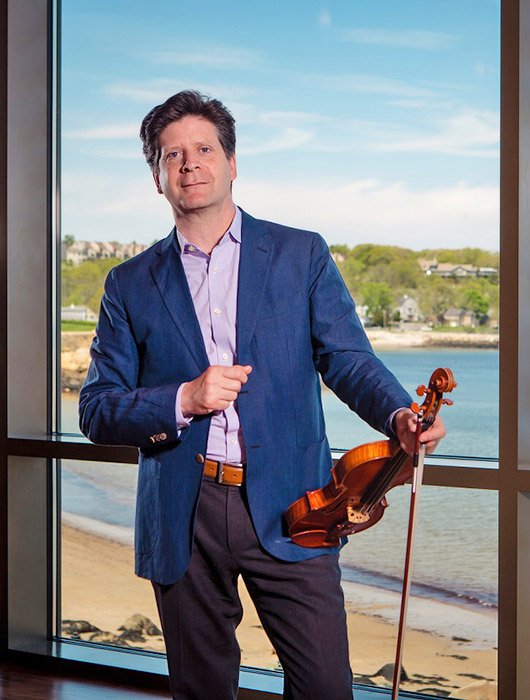 In my review from last July, I recounted how Deveau passed the torch to you in the last movement of the last piece he played as artistic director. What advice has he given you about keeping the festival in top form? And can you give us any hints about what you are mulling for your first festival?

David has been super supportive and helpful. One area that we both share a passion for is the support for the best of the new generation. I was invited by him to perform at Rockport when the St. Lawrence Quartet was just starting out. I want to build on this legacy and create many more opportunities that bring our finest younger artists into the mix alongside the more established performers. We are working on some exciting plans to allow for more opportunity in that area. Regarding specifics for the summer, we will soon have lots to share.

Christopher Theofanidis: The Conference of the Birds (new work)
Schumann: Cello Concerto in A minor transcribed for solo cello and string quartet
Brahms: String Sextet No. 2 in G major, Op. 36

Comments Off on Shiffman Begins Imprint on Rockport