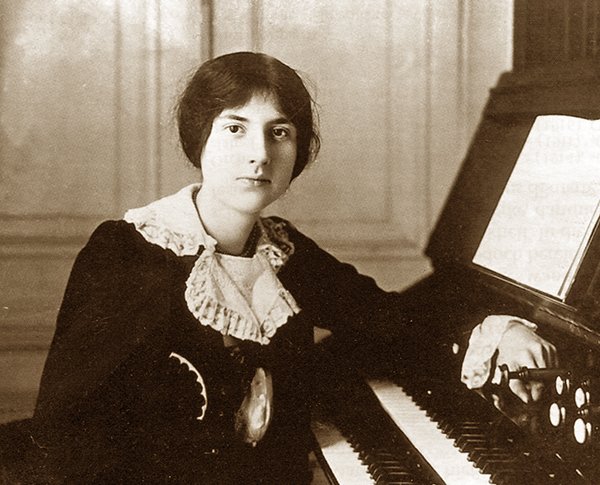 Now celebrating its 20th anniversary of “Transforming experiences in chamber music,” the adventurous Chameleon Arts Ensemble programed “of voice and verse” for Saturday evening’s concert at First Church Boston. Deborah Boldin, music director and flutist, led off impressively with a short but piquant duet for flute and piano, D’un matin de printemps by Lili Boulanger (1893-1918), whose death centenary will be commemorated during the coming year. This little piece echoed Debussy’s late-style polychordal harmony and Ravel’s chromaticism of 1913, but with an intense and genuinely individual personality, yet another indication among several in Lili’s small corpus of works written before her tragically early death. Pianist Elizabeth Schumann sensitively partnered Deborah Boldin’s assured, warm flute sound.

Full disclosure: I am president of the Lili Boulanger Memorial Fund, Inc., established in 1939 by her older sister Nadia Boulanger and with the stated goal of providing support to promising young musicians at the start of their professional careers.

The viola, violin duet configuration challenges even Mozart, whose duets are relatively dry. August Read Thomas’s four Rumi Settings for violin and viola showed a nice variability between harsh atonal dissonance and warm hints of triadic structure, sometimes even in the same piece, especially in the first, “Dramatic,” and the fourth, “Passionate,” which bracketed the group with slow-moving, high-pitched tones sustained for long-breathing lines.  The viola soared into high positions in the first piece, but I don’t even think I heard the C string until the second movement, “Resonant Arpeggio,”, in which disclosed neither arpeggii nor resonance, was in fast tempo, with plenty of ponticello snarls, flying pizzicati, and chordal strumming, and a trace of mixed G major and minor. This in turn gave a tonal basis for the third of the set, “Suspended and graceful,” in which a high-register D suspended throughout nearly the entire slow movement, trading between the two instruments. It was as much fun to watch the two players, Francesca de Pasquale and Scott Woolweaver, as it was a pleasure to hear their unruffled, mature sound.

Aaron Copland’s Twelve Poems of Emily Dickinson (1950) come at a cusp in his transition from the bright neoclassical tonal language of Appalachian Spring and Third Symphony to the more wandering chromaticism of his Piano Fantasy and Piano Quartet, which mark the next stage on his march to atonality in the late 1950s. Thus the 12 songs project a curious balance in their tonal flavor, with particular charm in “Why do they shut me out of Heaven?” (no. 4) as well as “Going to Heaven!” (no. 11, everybody’s favorite in the set). This becomes more somber in “The world feels dusty” (no. 5), in slow 3/4 that is almost a sarabande, and “Heart, we will forget him!”, a slow dirge in 4/4 with an organlike bass. Copland’s generally light textures reflect the gossamer lyricism of the texts, with a few notable exceptions, like “There came a wind like a bugle” (no. 2), in which the heavy artillery sometimes seems too heavy. (George Perle’s setting of this same poem, by contrast, is really hair-raising, but it’s hardly well known.) Nevertheless, the overall optimism of Copland’s set is convincing, and evoked Stravinsky’s praise as one of the best examples of a genuinely American lyricism in song. Mary Mackenzie’s voice is almost too big and dramatic for the declamation called for, but she nevertheless gave us a strong, perfectly-tuned reading of these imaginative songs with the full vocal mastery that she demonstrated with Collage two weeks ago [review here]. Pianist Vivian Chang-Freiheit partnered with fine attention to balance and gesture.

I was not much convinced by Joseph Schwantner’s Music of Amber, for flute, clarinet (Gary Gorczyca), violin, cello (Rafael Popper-Keizer), and piano (Chang-Freiheit), and percussion Matt Sharrock. Its two movements, each accompanied by a short poem from the composer, feel impressionistic and appropriately fragrant; complex Ravelian chords, lush and even luscious in sound repeated at too-considerable length, with but a few superposed warbling melodic details, and several interesting ostinati of overlapped in unequal lengths. One admired the interpretative chops (especially the cadenza for bongos and tomtoms), and the timbres, while they became tiresome after a while, featured some sweet subtleties from time to time. (This was the third week in a row that I’ve seen the double-bass bow used to stroke the crotales.) This is a kind of minimalism, after all — a minimalism of harmony and color without the more obvious minimalism of rhythm and melodic pattern.

The warhorse (and Chameleon concerts skillfully mix the familiar and unfamiliar), Ravel’s Piano Trio (1914), reveals the composer at the height of his powers, especially in the first two movements, where he brilliantly demonstrates his considerable contrapuntal skill (it’s no coincidence that Ravel dedicated the Trio to his beloved counterpoint professor, André Gédalge). The first movement, in 8/8 meter, projects a regular pattern of 5/8 + 3/8, the 5/8 component reflecting the rhythm of the Basque zortzico dance. (Ravel was born in St. Jean-de-Luz in the south, not far from the Basque region of Spain, and his mother was of Basque origin, if these facts mean anything.) The harmony organizes a bifocal tonality of A minor and C major, with the movement ending in C major after an E-flat appoggiatura — a memorable gesture of tonal color. The pantoum second movement that follows is playfulness and ingenuity carried to virtuosic lengths. The pantoum verse form comes from the literary tradition of the Malay language, and some authorities have traced it out in Ravel’s piece, but the overall impression is one of rhythmic and metric vitality on a global scale, with irresistible polychordal harmony (and even a perceptible classical harmonic sequence in the Haydn-Beethoven manner, but chromatically dizened). In the third movement, an eloquently melodic passacaglia, the melodic phrases are freely adjusted and transposed. The least successful of the four movements, the finale is too heavily textured and even bombastic—one of Ravel’s rare miscalculations. Rachmaninoff might have happily written so many notes at a time, but one finds it an intrusion in Ravel’s refinement.  (Those polychordal fanfares in the RH of the piano turn up again ten years later, in Ravel’s Violin Sonata.) But nobody objected, and the energetic performance was happily cherished all around the audience and on stage; Francesca de Pasquale, Rafael Popper-Keizer, and Elizabeth Schumann carried the day.

It is a special pleasure to acknowledge the nearly ten pages of well-researched, expertly written, and very agreeably written notes by Gabriel Langfur, who is listed as treasurer of the Board of Directors. It’s rare to encounter such carefully and extensively prepared essays anywhere outside booklets for major symphony orchestras, but for a concert that was so satisfying in its high standards of performing and programming this intellectual exercise was most welcome. Hearty congratulations to all concerned.