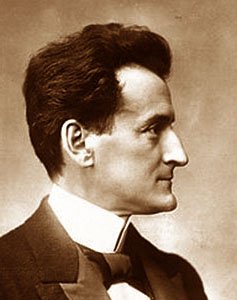 Neil Swidey’s report in the on-line Boston Globe Magazine [HERE] recognizing the centenary of the persecution and imprisonment of Dr. Karl Muck, peerless music director of the Boston Symphony Orchestra between 1906 and 1918, is thorough and rich in detail, making for fascinating as well as discouraging reading; it’s by far the best treatment of this sad story that I have ever seen in print, and I have been reading about it and gossiping about it for over half a century.

Karl Muck has been dead now for 77 years, and he lived only relatively briefly into the era of modern recording technology, but all the testimony of his contemporaries here and in Europe suggests strongly that he was one of the very greatest orchestral conductors ever. It’s enough for me that he conducted the American premieres of such works as La mer and Schoenberg’s Five Pieces op. 16; he probably didn’t like either of them, but he gave them his full professional respect and attention, and the results were widely considered flawless. My teacher, Roger Sessions, who as a Harvard student heard the Boston Symphony under Muck’s direction, said to me more than once that in his whole lifetime he never heard better orchestral performances. He might have been thinking of Muck’s performances of Wagner, in whose music Muck particularly excelled.  (Note that photograph of Muck in a Swiss beret; it has a marked resemblance to several well-known photographic poses of Wagner.)

It was interesting to learn about the background to Muck’s alleged refusal to conduct “The Star-Spangled Banner” at his BSO performances, which began with a misunderstanding and was inflated by the yellow press to monstrous proportions.  I heard—gossip undoubtedly—that gave a different version of the story: confronted with the audience demand, Muck retaliated by providing his own orchestration, one modeled after the Tannhäuser Overture, with the full trombone section playing the melody and the strings playing the triplets-within-triplets figure that Wagner introduced at measure 37 (letter A in the Peters score). This is probably completely apocryphal, but it’s funny enough to pass on.

Sessions remembered the controversy of 1918 that resulted in Muck’s internment in a prison camp for more than a year.  Sessions’s recollection, likely attenuated after 45 years, was that Muck had fallen in love with the daughter of a prominent Boston family and that she had become pregnant. Muck was then quietly offered the choice of having the scandal made known and exposing the young woman to shame, or being interned as an enemy alien; as a true gentleman he chose the latter. But this story too seems exaggerated, and Swidey’s account more realistic.
One more vignette from my graduate student years: a fellow composer, also a well-known gossip, confidently asserted to me what he was sure was gospel truth: “It’s well known that Otto Klemperer is Gustav Mahler’s illegitimate son.” Baffled by this gospel, I determined to ask Sessions, who was about the same age as Klemperer.  He smiled indulgently and said, “Well, Mark, I don’t know how you could answer that without asking Klemperer himself. But when I was a student, and Karl Muck was conductor of the Boston Symphony, it was rumored that he was the illegitimate son of Wagner and Mrs. Jack Gardner.”