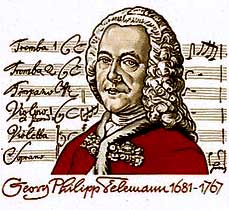 The only one of Telemann’s 40-some passions to be published in the composer’s lifetime, the masterwork was well-received in Hamburg when it premiered, in 1745. Its two-plus hours of music were accessibly written, so that the common German people could understand it, and Telemann insisted it be published with German performance indications only. Its sung lyrics are all in German as well, which surely contributed to the Hamburg success.

First Church’s large space provided a nearly ideal acoustic balance for the eight-person chorus, seven principal singers, and 19-instrument orchestra. Telemann’s music begins sonorously, with masterfully crafted moments of tension injected when Jesus prays to his Father before being taken away. Christ sings an accompanied recitative and a full aria, something rarely done at the time. James Lesu’i’s resonant baritone created a portrayal of deep sympathy. Throughout the evening, conductor Elias Miller achieved a fine balance of the components of his ensemble, bringing out the passionate violins and soaring flutes that often mirror soloists’ melismatic runs.

Moments of dramatic theatricality that stood out as particularly effective included, in the first half, the seamless blending into unison of the lightning-fast fugal choir, only to stop altogether: just as swiftly as the choral voices bathed us in their waves, they left behind a sudden echo which reverberated off the towering church walls. In the second half, a frenzied mob chants “Crucify!” through wild, feral runs that sounded almost contemporary in their haphazard ferocity. Telemann’s Passion offered much more material for female soloists than Bach’s: alto Maddie Studt’s beautiful voice richly filled the hall with a dulcet quality rarely heard, while MaryRuth Lown’s clear soprano and tasteful dramatic interpretation contributed grace.

Telemann’s passion ended with a subtler, more understated cadence than Bach’s. Yet the audience was moved to two standing ovations, making this a very successful North American premiere, especially given a 272-year wait.