King’s Chapel 60th Concert Series opened Sunday afternoon with Bach’s Magnificat on a program that also included a major choral work by his son Carl Philipp Emanuel. The latter, receiving its first American performance, was a cantata long thought irretrievably lost, then rediscovered together with many other such works in Kyiv in 1999 (as described here). Heinrich Christensen directed the 17-strong King’s Chapel Choir together with an orchestra also comprising the same number.

Emmanuel Bach created Musik am Dankfeste wegen des fertigen Michaelisturms—Music for the Festival of Thanks upon the Completion of the Tower of St. Michael’s Church to celebrate the rebuilding of one of the major churches of Hamburg, Germany, he had been cantor and music director since 1768. It was fitting that a work originally produced for a church dedication in 1786 should have received its American premiere in a church completed in 1754 and not entirely unlike St. Michael’s in its rather sober interpretation of the Corinthian order (although possessing only a stubby tower).

Anyone familiar with the church cantatas of Johann Sebastion Bach would have recognized a family likeness in the music, despite the half century and more separating this example from comparable works by the composer’s father. But stylistically it is closer to music by Telemann, Emmanuel’s godfather and predecessor at Hamburg, and that of other composers who were popular in northern Germany at the time but whose works are hardly ever heard today (such as Gottfried August Homilius).

At least one movement from this Tower Festival Music had been heard previously in Boston. Like many of the composer’s vocal compositions, it was assembled from previously written music, and its second half begins with the opening chorus from his Dank-Hymne der Freundschaft (Hymn of Thanks for Friendship). The latter was performed by the Handel and Haydn Society in 2001 at Symphony Hall under the direction of the late Christopher Hogwood. At least one of the three arias also comes from an earlier work, and another chorus, together with its introductory “ariette,” is identical to the Heilig or German Sanctus which Emmanuel wrote around 1778. He subsequently incorporated this popular Heilig into other compositions, much as Handel repurposed the “Hallelujah” chorus from Messiah for a number of occasions.

Those familiar with Emmanuel’s famously eccentric compositions for solo keyboard might have been surprised by the more classical character of the Tower Festival Music. In fact, its songlike arias, as well as the simple choruses opening each half, are typical of the composer’s late vocal works. Its pasted-together character is not obvious, as the preexisting movements are joined together by newly composed recitatives. But the Heilig, scored for double chorus and orchestra and much more substantial than any other movement, is too big to be fitted comfortably into the end of the first half. This would not have been an issue in the original performance, where the music was broken up by a sermon read shortly after the Heilig. But in a modern concert presentation it does leave the second half of the work seeming anticlimactic. 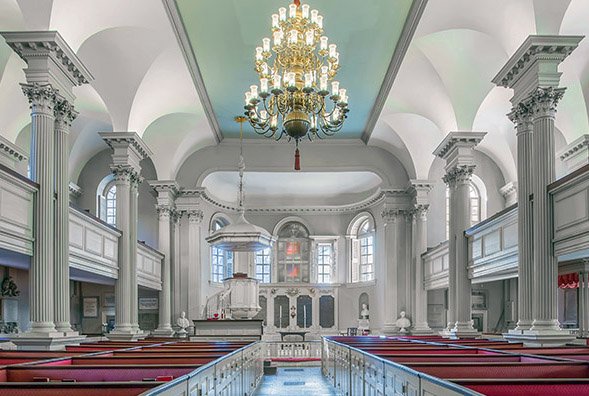 The recitatives describe, among other things, the destruction of the original St. Michael’s Church by fire after a lightning strike. These, as well as the borrowed aria (marked “Feurig,” “fiery,” in the score), provide some opportunities for dramatic singing and playing. On the whole, however, this was at best a conscientious performance. The Heilig one of the composer’s most famous vocal works, is remarkable for its slow opening section, in which one chorus represents the angels in heaven, another “the nations” on earth. The contrast was effective despite the absence of a second orchestra, the organ providing the main accompaniment for the angel choir. But the fugue that follows was less engaging, and although the composer went on record as wishing it to last no longer than three minutes, this rendition came in at three and a half—not too bad, but not exciting either.

Much the same, unfortunately, can be said for the rest of the afternoon’s music as well. The chorus was well prepared, and mezzo Jennifer Webb injected some urgency into the little ariette that preceded the Heilig. Quinn Bernegger capably delivered the coloratura of the tenor solo in the “Deposuit” from Sebastian’s Magnificat. But several other singers struggled in the tortuous melodic lines of the father or the chromatic modulations of the son. The trumpets, which were sometimes not quite in tune, tended to overwhelm the strings, although the violins deserve praise for managing Emmanuel’s unidiomatic passagework with aplomb, and bassoonist Stephanie Busby provided an expressive obbligato in one of his arias. Overall, though, the orchestra failed to make a case for the use of modern instruments in either piece, playing politely where forceful articulation was required to give some energy to the Tower Festival Music.