Citizens of the young American colony sang their rejection of tyranny in partsongs, marches, anthems, jigs, and ballads; the rousing works by citizen-composers such as Boston tanner William Billings and Vermont tavern-keeper Jeremiah Ingalls still ring true today. With the Choral Fellows of Harvard University (Ed Jones, Director) and young professionals from the Longy School of Music of Bard College Boston Camerata revisits The Liberty Tree. And enlarging on  LaFayette, the world should never forget where it grew, the promises made in its shade, and the patriotic blood that watered its roots.

The recipient last May of the Saint Botolph Distinguished Artist Award, Camerata’s Artistic Director Anne Azéma has recently returned from a European concert and recording tour to lead the the ensemble’s in-town season opener. We were able to lob a few questions in her direction during a break between rehearsals for “Liberty Tree: Early Music for the American Soul.”

BMInt: “Partsongs, marches, anthems, jigs, and ballads from the young Republic, when citizens sang their rejection of tyranny! Rousing works by citizen-composers…still ring true today.” This sounds like a manifesto more than a concert program.

AA: Many of us think that protest songs began with Woody Guthrie, the Weavers, and Bob Dylan.  Our point is that saying, and singing, “no” to perceived injustice is as American as cherry pie.  The tradition of protest goes back to the beginnings of this nation.

There is virtue in infinite, painstaking attention to detail, and in careful scholarship.  But even we quaint, early-instrument types are citizens of today. We curate these old repertoires for a reason: they frequently contain powerful messages, and we need to bring what they have to say into the present time.  For instance: our biting campaign song against America’s second president, John Adams, sounds like a recent Op-ed from the Washington Post. It packs quite a wallop.  But let’s keep perspective. There will be plenty of tender, lyrical moments, too.

A few years ago, as we recall, Camerata was criticized for its supposedly tendentious programming of early Americana, and was urged to stick to religious music. But some have lost sight of how Old South Meeting House hosted hootenanys of protest.

If the above-mentioned gentleman is reading this interview, we invite him, to Memorial Church on Sunday. We persist in secular dissent, with choirs, with fifes and drums.

OK, you are performing in a church. It’s not all going to be about political and social protest, right? And some of the early American secular music is hard to distinguish from its sacred counterpart.

As you read and sing through the early hymns and anthems, you become aware of how deeply our first American composers were involved in issues of the day, even when the erstwhile subjects were about Bible stories. William Billings set a text about David’s mourning for his son, Absalom, producing one of the most powerful, epigrammatic short compositions of the late 18th century. It’s still called, today, at most Sacred Harp sings and conventions.  The deep meaning of the text to him, and also to us, once we think about it, has to do with rifts within a society. Billings was reflecting on a New England torn between Tories and American patriots. We can think about it in a dozen ways…as could the psalmists in their own times. 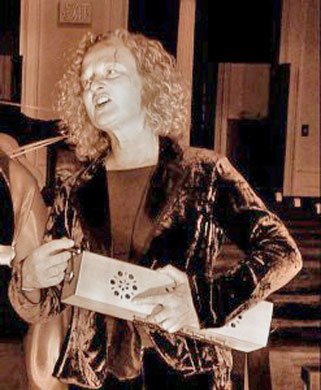 Some of those battles remain unsettled. Who is an American, who is a Brit? Who is a free man who is a slave? A few years back we those problem were solved.

We’ve included some powerful slave songs, collected at the time from oral tradition, and an early African-American hymn, and even some Abolitionist music

So, plus ça change …

The arts have a lot to contribute in this moment of questioning. Some early satire, consoling melody, and earnest exhortation, from the American musical past, can help give us some renewed resolve. Despite everything, we are free men and women, we think, we speak, we sing and play, and we will never yield to oppression.