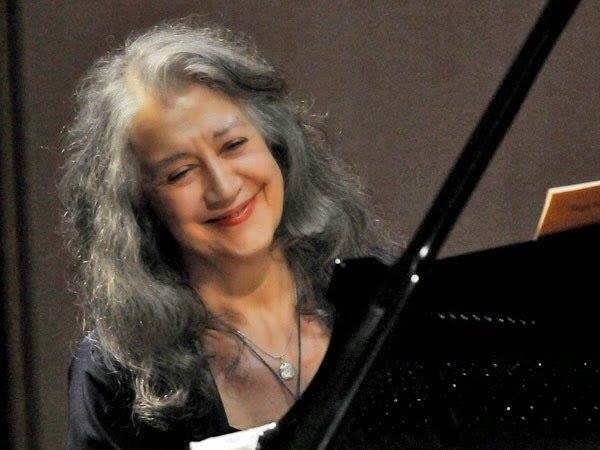 Undoubtedly Sunday afternoon will turn out to have been a high point of this year’s Celebrity Series of Boston’s roster of stars. Pianist extraordinaire Martha Argerich appeared on this series in 1982 and in 1989 (with Orchestre de la Suisse Romande, Armin Jordan, music director). She had cancelled four times with the Boston Symphony , and was famously replaced by a very young Yuja Wang. Now on a U.S. tour that began last Friday in Carnegie Hall, Argerich is collaborating with the classy British-born, Sir Antonio Pappano, conductor of London’s Covent Garden since 2002) and the Rome-based Orchestra dell’Accademia Nazionale di Santa Cecilia (since 2005). Appearing here for the first time since 1969, the ensemble was a real treat to hear, especially the winds and brass, but I imagine that what drew a full house to Symphony Hall was the rare chance to hear the legendary Argentinian-born Martha Argerich, renowned for her transcendental technique and musical genius, which leave most critics running out of superlatives.

To call her merely a superstar is to diminish what she means to her steadfastly devoted fans, to whom she is a goddess or simply God, or as two admirers called her on Facebook last weekend. Health issues have plagued Argerich over the years, and she became notorious for cancelling concerts, even entire tours, at the last minute. About halfway through her 70-year-long career—she is now 76—she decided she was fed up with playing solo recitals, and proceeded to play only chamber music with friends and concerti with orchestras. When she has appeared in the past decades, it was often with her second husband, Charles Dutoit. (she has a had a child with each of her three spouses ). And often her concerto of choice was Prokofiev’s treacherously difficult Prokofiev Piano Concerto No. 3 in C Major. Word among pianists is that there is no pianist alive who can play this piece as well.

Pappano opened with “Sinfonia” to Aida, a collection of themes from the opera, which Verdi discarded, and Toscanini re-discovered. The lovely set was not what the restless audience came to hear. Verdi correctly opted for a much more pared down Prelude for his commission for a grand opera to celebrate the opening of the Suez Canal. We got a taste of the orchestra’s excellent strings in the quiet music associated with Aida herself.

When Argerich came on stage, applause pent up for decades erupted. The concerto’s opening clarinet solo began the best reading I have heard. The orchestra collaborated perfectly with this mercurial artist; in many instances it felt like exquisite chamber music. Argerich deployed shattering bass, tiger-like pouncing attacks, thundering chords, double octaves galore, and magically placed glissandi. She has the strength to cut through a large orchestra, and the pianissimo to create a hushed reverie. The second movement, sardonic and dry, which consists of a meditative theme and five variations, was particularly exquisite. After the thrilling third movement, riotous applause broke out. Three curtain calls later, Pappano and Argerich sat side by side and gave a charming four-hand performance of Ravel’s “Laidronette, Empress of the Pagodas” from his Mother Goose Suite. Dazzling, high fun, it went by far the fastest I had ever heard it. The person next to me had tears in the eyes and her hand on her heart throughout the concerto. “Laidronette” simply made everyone smile. Argerich’s transcendent pianism caused widespread goosebumps in a Prokofiev Third for the ages. For those who missed her in Boston or New York, there are, amazingly, already videos of these performances posted on You Tube (along with some ten other performances of Argerich playing this piece).

At intermission, the hallway was packed a huge horde of mostly students lined up waiting to meet their idol; she was seeing no one. The show went on with two of Ottorino Respighi’s three orchestral suites depicting images of Rome through the centuries. He composed The Fountains of Rome in 1916, the well-known The Pines of Rome in 1924, and The Festivals in 1928-9. The first two were composed for this very orchestra while Respighi was on the faculty of the Accademia di Santa Cecilia. They show off orchestral colors, especially the vast brass section, and the initially barely audible strings (more goosebumps). Clarinetist Stefano Novelli deserves a solo bow for his role in the Prokofiev and Respighi. The recorded bird songs and the rows of harp harmonics always introduce a bit of extraterrestrial mystery. Pappano led the slow, inexorable concluding crescendo beautifully. Sometimes the hometown orchestra really does it the best.

The impressive Pappano and his tireless musicians evidently like long programs. The Pines of Rome is a perfect closer, or so I thought. But two encores followed: Sibelius’s Valse Triste and the closing section of Rossini’s Guillaume Tell. A little like tiramisu and an overflowing plate of sweets after a six-course feast.