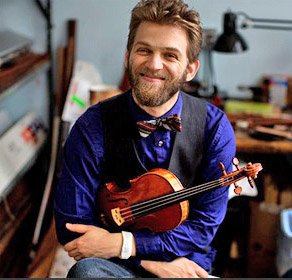 Safe to say that few of those in the nearly soldout crowd at the ICA Thursday night were there to see the performers. Not that the lineup wasn’t impressive: violinist Johnny Gandelsman of Brooklyn Rider and Silkroad Ensemble; new-music piano luminary Sarah Cahill; and Evan Ziporyn, virtuoso clarinetist and faculty director of the MIT Center for Art, Science & Technology. No, they were there for the huge array of metal plates mounted on wooden boxes: two of composer Lou Harrison’s gamelans had made the trip to Boston for a rare concert of works written for them. Harrison was born in 1917, thus the evening’s rubric “Mr. Harrison’s Gamelans: A Centennial Celebration of the Music of Lou Harrison”.

For the reader wholly innocent of the gamelan, the Internet has details, but, in brief, it is an ensemble of instruments, a collection of pitched percussion, which originated in Java and Bali. It is played by an ensemble of varying numbers of players, in this case the MIT Gamelan Galak Tika, a group of 18. Gamelan music and performance are often made up of repeating, interlocking fragments: Steve Reich was deeply influenced by the processes in his early career. Tuning is a critical part of gamelan identity.

The two gamelans on display had very different characters, and quite different names: there were Old Grandad #4 on the left side of the stage and Gamelan Si Betty on the right. We first heard Si Betty, in a brief work by Jody Diamond. Diamond was a longtime colleague of Harrison’s, and his gamelan teacher.  Upon Harrison’s death, in 2003, Diamond became caretaker of the gamelans, and she was present this night, having accompanied them to the ICA. Diamond’s work At Lou’s Table functioned as an introduction to the evening: blocks of slightly varying texture succeeded one another, Diamond’s drum initiating changes in tempi. Much of the material was simply scalar fragments, in the unique tuning that makes Si Betty what it is, an elaborate beast, some of its pieces more or less like xylophones or marimbas, some made up of rounded plates with center peaks, others of large tongues of gray metal. Within the constraints of the sound of struck metal (mostly with soft mallets) arises a surprising range of available timbres. Diamond’s work exposed much of this range but eschewed dramatic contrast. Something was changing every moment as the music worked through its interlockings, but the overall effect was calming and slow.

Both of Harrison’s pieces performed this evening demonstrated a similar tendency to calm, despite being cast as works for soloist and gamelan. In Western music we expect conflict and contrast, and certainly Gandelsman played with the kind of exuberant physicality required when he tackled Harrison’s seven-movement Suite for Violin and American Gamelan. Apart from the opening threnody, where the violin speaks in soliloquy, even the most extroverted playing found itself within a gamelan texture that was steady, even implacable. To be sure, Harrison’s violin writing generally is not all that extroverted: the energy generated by the busiest, fastest movements is that of a sudden gust of wind in the forest, much activity, few sparks. The Suite was written for Old Granddad #4 (apparently there are three others), and the work evidently can be performed with only that particular gamelan. Old Granddad is smaller than Si Betty, and appears more utilitarian. It is made up of five trapezoidal tables, four of which use simple cylindrical metal tubes to create their sound; one uses larger slabs. An impressive fan of these slabs creates the deepest tones: they are mounted on resonator cylinders about five feet high, arranged in a fan around the performer. Old Granddad #4 was painted red with black legs, which combined with the simplicity of its construction gave it a modernist look. The cabinets of Si Betty are lower to the ground and decorated with sinuous, brightly colored flowers; the program said they were informed by a Pennsylvania Dutch design but were just wild enough to suggest the designer was perhaps a bit “under the influence” as well. 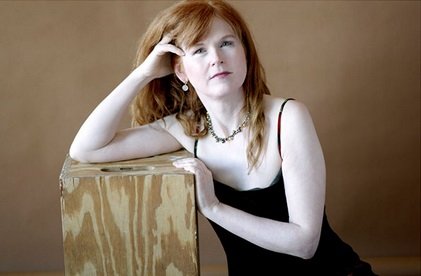 This reviewer’s ear is not sharp enough to detect what about Old Granddad makes it an indispensable part of the Suite, but its effect was sharper and brighter than that of Si Betty, which has a deeper, mellower tone. Old Granddad is only a third the size of Si Betty, so its textures were clearer as well. Gandelsman spun out Harrison’s lines with little effort; there were some moments of pitch uncertainty (or perhaps that was Old Granddad), and the last movement, Chaconne, had some obviously awkward writing for the violin which Gandelsman executed as best he could without quite making it seem effortless. That movement was co-written with Richard Dee, which might explain why only there one heard harmonic movement that seemed oddly familiar, turns that made me think of 20th-century English pastoralists, as if Gerald Finzi had been on the composers’ minds.

But Si Betty was the star. Its tuning is much more exotic to a Western ear, and Harrison’s Concerto for Piano with Javanese Gamelan requires the keyboard to be tuned to match it, a task that apparently requires many weeks for the piano to settle in (it’s a rare concert where the tuner gets a shoutout; to my shame, I neglected to note his name). The piano part opens with some big, deep chords that suggest a Romantic concerto, and in large part the piano returns to such gestures regularly. But once Si Betty joins, Romanticism immediately retreats, and we are in a tintinnabulating sound world that envelops the piano and absorbs it. Of course, the piano has been “bent” to Si Betty’s tuning, and much of the interest of the work is in the weird and uncanny sounds that emerge from the instrument. The Concerto and the Suite were composed years apart (1973 and 1986), and the Concerto feels more complete and assured. In the Suite there was a sense of novelty to the experience; in the Concerto we hear a unique voice that is also somehow subsumed in the personality of the gamelan.

Between the two Harrison pieces came a work for violin, piano and clarinet by Ziporyn. By the Numbers has no gamelan, but it uses the piano tuned to match Si Betty. Because of this requirement, the composer joked that not only was this its very first performance but it might well be its last. In two movements, “Discordian” and “Concordia”, Ziporyn combines his signature rhythmic drive and inventiveness with the potentials posed by piano tuning. “Discordian” leaned harder into what felt like clashes or dissonances, but even “Concordia” had its edges; the title suggests Ives by way of that town of the Transcendentalists. As there was little roughhousing in the Harrison works (an adamant pacifist he was, and even in his most active passages there is something gentle and a little distant), Ziporyn’s work was a tonic for those of us who were missing some rough and tumble.

As wonderful as it was to get to hear these famous and reclusive instruments, one might have wished for a better room than the ICA offered. Violin and clarinet both had to be amplified, and one assumes the gamelan was as well, as the stage fairly bristled with microphones. The sound engineering was expert (I could not tell for much of the evening if the piano was miked), but inevitable artifacts of amplification distracted. Gandelsman’s plain, attractive tone was marred by bow and finger sounds that normally would be inaudible. Ziporyn’s impressive and exciting slap-tongue technique sounded more… realistic than one might normally want to hear. The panorama of Harrison’s gamelans was breathtaking against the glass walls of the hall, with the Harbor in the background; perhaps that justified the use of this venue. However, I left wishing that someday I might encounter these magnificent and intriguing instruments in an environment where their sound will be unadulterated.