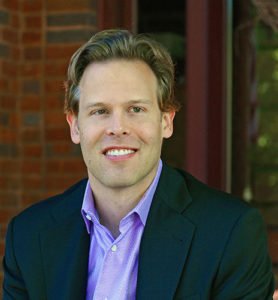 Growing an orchestra is not dissimilar to growing a garden. It takes time, a clear vision, patience, and skill, plus a number of factors that are not predictable or controllable, like a hailstorm or an economic downturn. To be a good conductor also takes love and commitment, a thirst for knowledge, and charisma, as well as musical competence and artistic sensitivity.

It looks as though the Brookline Symphony has landed itself a very promising new music director who embodies all these qualities to nurture that excellent community orchestra into its best self.

One can hear the results of the marriage soon in the orchestra’s “Clashes of Fate” with Beethoven’s Violin Concerto, op.61 and Tchaikovsky’s Symphony No.3, op.29 “Polish” at All Saints Parish, 1773 Beacon Street next Saturday at 8:00.

Andrew Altenbach came late to the game as a conductor, not hearing his first symphony until age 19. But he has more than made up for that gap. A native of Atlanta, he went to Indiana University to study economics and piano. Piano won out, as did conducting once he tried his hand at it. His early work as vocal accompanist led to work as an orchestral conductor, and he hasn’t looked back.

Altenbach is the current music director of opera at Boston Conservatory and has also conducted for Indiana University Opera Theater and for Temple University. He recently served as artistic director of the Boston Opera Collaborative, leading the company in several new productions, garnering the following from the Boston Globe: “Altenbach built the drama with such point and purpose, it was as if Rossini were creating a new art form.” He has held coaching and conducting staff positions with several prestigious American companies, including the Santa Fe Opera, Music Academy of the West, Cincinnati Opera, and the San Francisco Opera Merola Program.

On the orchestral side, Altenbach serves as artistic director and conductor of the Minnesota Bach Ensemble. Symphonic conducting credits include engagements with the Atlanta, the Memphis, and the Milwaukee Symphony Orchestras. Altenbach achieved great success as music director of the St. Cloud Symphony Orchestra and has also conducted the St. Paul Chamber Orchestra, Minneapolis Musical Offering Series, Brevard Music Center Orchestra, and Grand Harmonie in New York, and more.

With his warm manner, Altenbach is engaging and comfortable talking about music and about his career. A large component of a music director’s job is interfacing among board members, donors, and audience, on top of being an inspiring musician, so these are more than just pleasant attributes; they are part of the toolbox.

Altenbach looks forward to the upcoming season with Brookline with enthusiasm, expecting it to be a period of the musicians getting to know him, and for him to be able to learn more about the orchestra. Like many community-based orchestras in the Boston area, the musicians come from a mix of backgrounds, some conservatory-trained who went on to interesting and important careers in research or medicine, as well as younger student musicians gaining professional experience. As Altenbach says with appreciation, “The IQ level of this orchestra is pretty astonishing.” Without missing a beat, musicians go from researching cures for cancer to playing an instrument in the evening.

With a once-a-week rehearsal schedule, there are factors of program scope and depth in play. “It wouldn’t make sense to program the Alpine Symphony, for instance, when you have a week between rehearsals.” Altenbach also carefully considers how pieces blend, and whether the musicians and audience will find the program interesting. He likes to pair familiar music with something less so, or perhaps a lesser-known work by one of the standard composers. He programs as well with an eye to musician satisfaction and creating opportunities for success. It is a thoughtful way to look at the collaborative art of musicmaking. Rather than program for himself, Altenbach is thinking of the collective experience, which makes for a more relaxed and enjoyable performance for his musicians. Inevitably this will transfer to more expansive and emotionally satisfying group artistry.

Altenbach has wanted to work on Tchaikovsky’s Third Symphony for some time, and will be performing it on opening night, October 21. Some other highlights of the season will be the less often performed Rückert-Lieder of Mahler. “Everyone does Songs of a Wayfarer or Kindertotenlieder. I thought it would be nice to hear the Rückert-Lieder, and we have a terrific singer, Abigail Dock.” Altenbach pairs this with Beethoven’s Second Symphony and includes the Brahms Tragic Overture, to keep the trombones happy—always a good idea!

In other areas, as director of the opera program at Boston Conservatory, Altenbach is intrigued by the institution’s recent merger with Berklee. BoCo has in recent years overhauled its opera department and built a program of high standards and excellent singers. With the reach and resources of Berklee, he sees the potential to expand this growth, such as an opera workshop held in Valencia Spain over the summer. The three-week program designed by BoCo faculty had students aged 18 to 30 from all over the world participating in opera at the Palau de les Arts Reina Sofia.

Altenbach looks forward to finding ways to bring more musicians from the Brookline Symphony into the community in smaller programs, using chamber music to build strong musical relationships among musicians themselves while expanding the reach of the orchestra. He hopes to be able to play piano with some groups as well.

In future seasons, Altenbach would like to explore Janacek or Martinu with the orchestra, and he hopes to program Dvorak 7.

One looks forward to hearing the Brookline Symphony continue to blossom as the season unfolds. It is in the hands of a caring and thoughtful musician striving toward success on many levels.