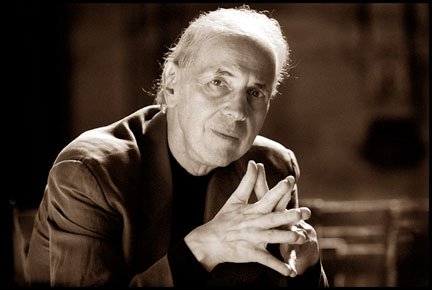 Above and within Jordan Hall last night hovered the innig, personal voice of legendary pianist Russell Sherman, as a generous crowd gave a warm welcome to celebrate his 50th anniversary NEC faculty recital. That the 87-year-old still draws animating force from admirers probably inspires him to take the difficult steps across the stage. He makes us feel like we energize him, else what accounted for his sprightly jig with cane at his curtain call?

For his oft-magical appearances among us over half a century, we owe much loyalty to this old master. His lofty imagination and sui-generis originality have elevated him to cult status, and his legacy of students includes many of the finer practitioners of the art. The piano pantheon has rightly reserved a niche for him alone.

But Sherman owes us fans, veteran or newcomer, something that he does not always deliver anymore. A few years back, he began to perform with earplugs. He told this writer, “I don’t want the sound of the piano to interfere with the sound I have in my head.”

Which raises this question: Do you have any idea what your playing sounds like outside your head? Over the many years of attending your concerts, we have particularly admired your spontaneous dialectic in Schumann, but last night freedom stretched beyond license to excess.

For the first half, the damper seemingly went down at the beginning of Arabesques and didn’t come up again until the end of Kreisleriana. Phrases ran together crazily, and notes dropped in and out of context willy-nilly. The hands appeared to be at war with each other. Tempi lurched, indeed jumped, all over the place. From time to time you ravished us with pianissimos, and there were other reminders of past conjury. But mostly you occasioned anxious worry.

In socks for the second half, you seemed to have some trouble finding the damper. This was a good. Clarity, and détaché notes, emerged in Schumann’s Fantasy from the lifting of the dissonant miasma. But again, much head-scratching.

Will you be listening to the playback?  Suggestion: for your all-Beethoven recital on October 15th, how about removing at least one earplug?