Friday night at Jordan Hall opened A Far Cry’s 11th season with a new commission for the colossal Philip Glass. Composed as an homage to Bach and a tribute to pianist Simone Dinnerstein, the composer’s new Piano Concerto No. 3 pairs with Bach’s Concerto for Keyboard and Strings in G Minor, BWV 1058. Glass’s Symphony No. 3 and Bach’s Brandenburg Concerto No. 3, BWV 1048 completed the program

Dinnerstein’s excitement for the concerto gleamed; Glass’s multi-media happening The Photographer was the first live theatrical event that she attended without an adult. “As a result, I have always associated his music with coming of age. I was thrilled and honored when I received Glass’s invitation to breakfast and am eagerly awaiting the arrival of his concerto,” she wrote in her announcement of the concerto.

Notably, this is one of the first concertos written specifically for piano and strings since Bach’s time, and violinist/Crier Miki-Sophia Cloud drew social comparisons between the two. Cloud noted that in the 1720s, there were both works for string chamber music and keyboard concertos with string orchestras, just as there is now. Times were troubled in the 1720s, just as there are troubling times now. After a week of rehearsing Glass and Bach at the Isabella Stewart Gardner Museum, Criers created a space that strove for beauty and connection, just as Isabella did for her home.

Bach’s third Brandenburg, effortlessly and clearly conversed between friends. A Far Cry’s sensitivity and fervor kept a 300-year-old composition new and exciting. These musicians held nothing back, communicating with one another through intense eye contact, body motions, and intuition. Notable performances came from relative newcomer to the group, cellist Rafael Popper-Keizer, whose thoughtful playing matched the vigor of his fellow Criers, and co-founder/violist Jason Fisher, who transformed his viola solo into wholly enthusiastic, roaring, stomping music.

Glass’s Third Symphony, which followed, proved that A Far Cry has but one collective ear. The cohesive ideas, extreme sensitivity of musical line, and balance astounded. Many orchestras shy away from strong bass support, often worrying about balance problems. A Far Cry’s bass section was robust but not overpowering, instead adding tremendously to dynamic shifts and color changes. The second movement drove a well-oiled machine, the energy of the sound matching the group’s furious faces.

The third movement’s primary challenge harps the repeated, repeated notes. The bass instruments (double bass, cello, and viola) reiterate a different series of patterns, lasting two full minutes without any discernible melody, before the Violin II section enters with yet another accompanying echoed pattern. Well past three minutes into the piece, a violin solo finally emerges. Despite the lack of melody before this, the Criers rose to the challenge—and transcended. The section felt so thoughtful and distinctive, concertgoers might not have been aware of the reiterative nature of the movement. Rather than backing off during perceived sweeter moments, A Far Cry instead followed through the moment in earnest. Tongue-in-cheek, the fourth movement twisted a knife in the belly; the fervent sound left listeners energized and ready for the second half.

Dinnerstein, famous for her self-funded recording of Bach’s Goldberg Variations, created high expectations for BWV 1058. A question is constantly asked when a pianist plays Bach on a program: should the pianist pretend the instrument is a harpsichord, staying true to 18th century techniques, or should the pianist adopt Bach’s works to an instrument that was not yet invented and therefore use romanticized practices? Dinnerstein tried a mix of both, exhibiting terrace dynamics and Baroque ornamentation while establishing a cantabile line and rubato in particularly felt spots. The complex moments sounded practically offhanded, buzzing through the piece effortlessly.

The pianist first met Glass in his home, where she presented a short, informal recital of Schubert and Glass. “She played with a complete mastery of technique, depth of emotion, and understanding. Right away I knew I would someday compose music for her,” said Glass, according to Richard Guérin’s program notes. Glass began to conceive his Third Concerto in his garden, where Dinnerstein and Glass met for breakfast in 2014. As Crier Miki-Sophia Cloud mentioned earlier that night, there were still changes “being absorbed” as late as Tuesday evening for the Friday night premiere. The work lived, breathed, seethed, and simmered in its newness.

The first movement began as a piano solo full of syncopated chords and arpeggiation, perhaps a reminder of Metamorphoses for piano solo. The strings arrived with dynamic, chromatic scales and arpeggios, so relentlessly Glass as one section continued its echoed pitch melody. Themes developed into cascading motives, a religious experience that created unexpected harmonies, particularly for Glass. The first movement floated into the second obscurely, full of cadenzas that seemed subterranean, reiterating the cascading trope, switching between gentle caresses to robust, daring extremes.

It comes without surprise that Glass dedicated the third movement to Arvo Pärt, whose music famously emotes the mystical and other-worldly, yet embodies simple human truths. Glass borrows the tintinnabuli technique from Pärt. Tintinnabulation, in case the reader is unfamiliar, is Edgar Allan Poe’s coinage in “The Bells,” and given specific technical implications by Pärt. Tintinnabulation is the sound that is produced just after a bell is struck. Pärt often uses the idea of church bells ringing in his compositions, equating bells to triads in inversion that he uses repeatedly, centralizing any given piece to one group of triads and never wavering. Although this idea looks boring on a page, in practice, a transcendent melody emerges from the simplicity.

The final movement acts as a foolproof mix of tintinnabuli and Glass. A low drone in the base (see: Fur Alina by Pärt) decorates the tune, based off simple, close triads in inversion and ornamentation of two reiterating pitches just below, a technique Glass famously employs. Fur Alina echoes as many times as the performer wishes, and while the Piano Concerto replays its tune, it develops, in true Glass form. The orchestra enters gradually, and much like the third movement of the Third Symphony, repeating notes in the strings become the glue that holds the movement together. However, no trace of turmoil mounts in these motives like in the Third or in the earlier movements of the concerto—only serenity. 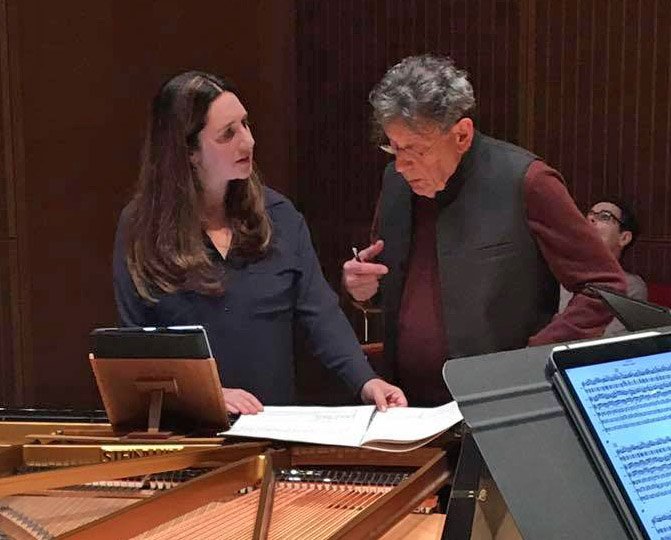 Dinnerstein played the same cantabile chaconne as the ensemble developed, and eons later, new motives appeared. By the end, the low, single-note drone developed into a full, descending line. In the words of Icelandic pianist Vikingur Olafsson, a frequent portrayer of Glass, “It’s not a repetition. It’s a rebirth. It’s not treading the same path, but traveling in a spiral” (Joshua Barone, “The Pianist Vikungur Olafsson on Why Philip Glass Matters” The New York Times, August 11, 2017). Truthfully, the entire movement felt like the most impeccable mix of Fur Alina’s (Pärt) tintinnabuli and extreme register shifts, the Third Symphony’s (Glass) repeating strings motive, Einstein on the Beach’s (Glass) hopeful, serene violin solo.

Glass’s final movement gifted the listener with the same comforting feeling that Pärt’s music often does, though the reason for this always seems mysterious. All felt right in the world. At one point, all the Crier had their eyes closed, swaying, openly enjoying playing, finding comfort in the reiterating theme, and letting it carry them away. Dinnerstein’s touch transformed; at other times, the Criers couldn’t take their eyes off her as she played. Her sensitive touch, clarity, and never-ending depth of colors left the audience transfixed and heart-shattered. The third movement’s aria repeated almost endlessly. And yet, not a single person in Jordan Hall wanted it to end. When the concerto finally concluded, it took a very long time for anyone to dare to put down their bows, and even then, it felt like too early a disturbance to clap. Nevertheless, a simultaneously standing ovation developed after what felt like an eternity.

Although a recording will not be released until 2018 (tour dates are outlined here), excerpts of the piece are available on Dinnerstein’s Facebook page. An excerpt of the first movement can be found here, and an excerpt from the third movement can be found here. Glass’s new concerto met or surpassed what everyone expected. It was purely, even comically, a “Philip Glass original.”