At the Charlotte New Music Festival last June, I attended several workshops by, had dinner with, and heard the final concert of loadbang, then, the New York-based quartet who had studied at at the Manhattan School of Music. I was excited to learn that they were going to finally give a performance in the Boston area, and it took place last Sunday afternoon at Longy, where they are now faculty.

Loadbang (an object term in the programing language MaxMSP) comprises trumpet Andrew Kozar, trombone William Lang, baritone Jeffrey Gavett, and bass clarinet Carlos Cordeiro. One of the leading new-music groups in New York, they use their eclectic instrumentation to achieve a sonic world unlike any other. Repeating recent Czech Republic performances, the concert delivered the unique palette, crafting some of the most sonically experimental repertoire from their catalogue.

Starting off with no introduction, the group entered Taylor Brook’s microtonal tour-de-force Ouaricon Songs vol. 2, inspired by electronically manipulating ethnomusicologist Alan Lomax’s recordings of Americana. The piece exists in its own realm, the microtonal inflections in the writing pulling away from traditional harmony. Unusual in being dominated by Gavett’s phoneme vocalizations, the quartet fluidly moved through roles of ensemble playing and accompanying Gavett, going so far as to mimic on each instrument the harmonic gestures of his phonemes as appropriately as possible. In so doing, the winds Kozar, Lang, and Cordeiro exhibited some of the finest musicianship I have witnessed in a long time, able to blend three entirely different sounds into a single mass that could highlight one color or another as need be. Evident immediately in this work, loadbang’s true strength is combining independent lines that, if the composer was careful, interlock into a single unit, the voices remaining to react in the most obtuse way as one unit. Lang’s final moments on trombone, when out of nowhere he has to pop several high pianissimo notes on the trombone for a long time, he executed flawlessly. I could see his face turn bright red from the strain.

Following Brook’s work (and a brief, commendable, needed discussion about it and the upcoming piece as well) was one I had the pleasure of experiencing the group perform in North Carolina, What Is the Word by Scott Wollschleger. Inspired by a Samuel Beckett poem on the same subject, Wollschleger and loadbang together struggle with the condition of aphasia, wherein the brain has trouble understanding and communicating by means of written or spoken words. Far removed from the previous composition, the composer utilizes the collective blend far differently, creating a sound bed that allows lines to be drawn from it. More often than not, given that it uses a defined text alongside quick utterances of words that are supposed to obscure our understanding similarly to how words fail to connect in aphasia, Gavett pulls himself from the homogenous bed to highlight his own extended color palette. This time, the ensemble focused heavily on stasis, which made a nice respite from the heterophony elsewhere. Loadbang also demonstrated their willingness to use more-extended techniques, blending Cordeiro’s slap tongue on bass clarinet with lip and mouthpiece pops (where the performer strikes the open mouthpiece end with the palm of the hand, something brass players are discouraged from doing) to create percussive effects without percussion.

A selection from their recent CD Lungpowered (which I encourage all new-music aficionados to hear) came next, Land of Silence by Rieko Füting, one of their MSM teachers. Its central conceit is poem text deconstruction into small exclamations uttered by Gavett and imitated by the others. This allowed the four men to blend into one homogenous unit far better than any prior moment on the concert, and though the piece was technically less demanding than the two previous, it did allow loadbang to further experiment with colors. Mutes factored heavily, a sound expounded upon later in the second half, allowing them to change their roles in the mass. As a result, the stasis and homogeneity of activity become entrancing, holding the attention until Gavett effectively gave a retrospective of the poem, ending the piece as an extended baritone solo where the words used earlier became clearly defined. It ultimately felt like extended cumulative form, akin to Ives’s experiments. 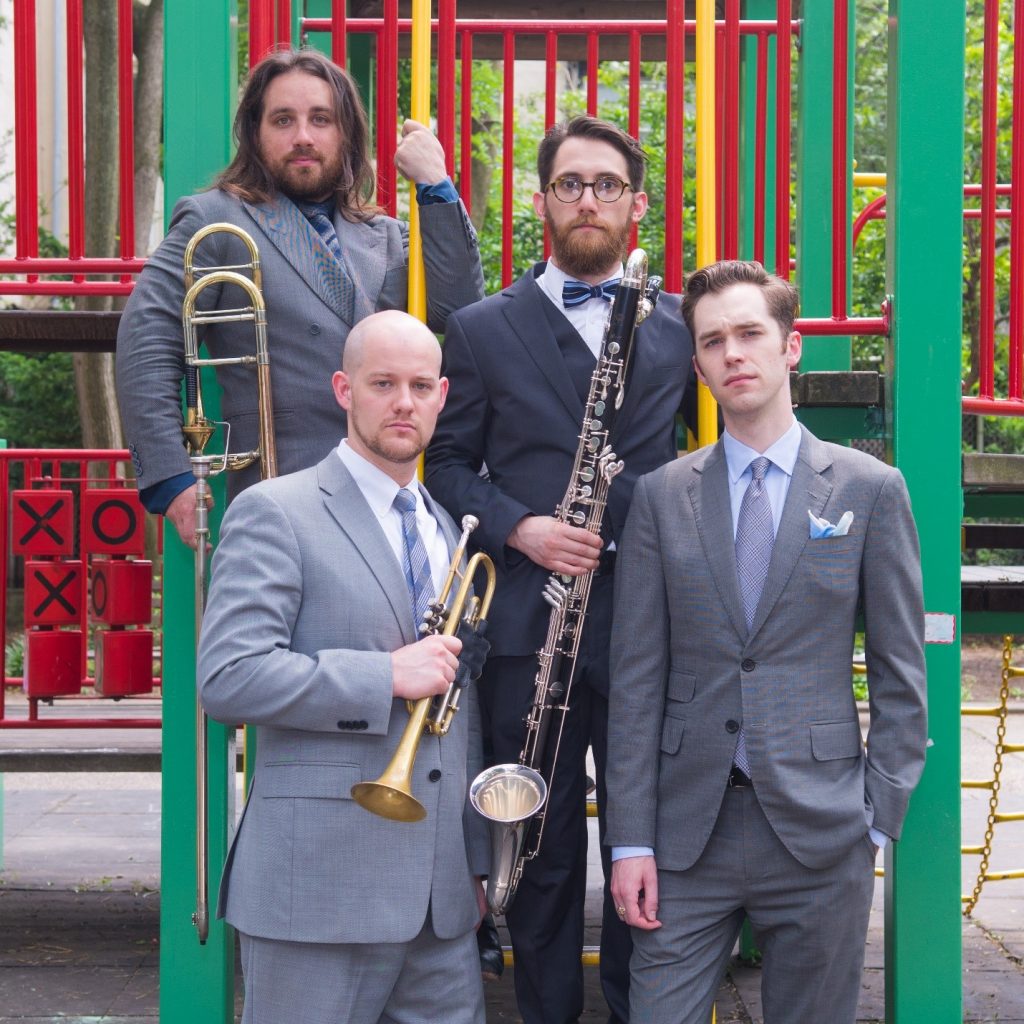 Infinitive by Scott Worthington is from the CD also. More than any of the others on this afternoon, Infinitive remained true to creating a single voice from the heterogenous assemblage of loadbang’s instrumentation. Described in opening comments as having been excerpted from the solitary soliloquies of Hamlet, the howling sound world comes from an almost unimpacted straight tone passed around the ensemble. Spatialization becomes one of the key elements that make up the title; each instrument pulls itself apart from the unit to emphasize itself, in effect acting alone in the space. Individually the movements highlight a different member of the quartet, the first Gavett, the second a mixture of Kozar and Cordeiro trading a line. The control required to achieve that kind of effect as well as they did entails great skill. When their moment to shine came, every musician had to slowly inch his way out of the harmony and build himself up to exist inside the infinitive the title speaks of.

The penultimate composition, per ser plagat de ta dolca ferida by Joan Arnau Parmies, was the only work on the program to have the composer in attendance (loadbang prides itself on commissioning for their unique instrumentation). This time the text was supplementary to the instruments of the ensemble, mixing the words of Ausiàs March with short bursts from the trumpet, bass clarinet, and trombone. Parmies creates a feeling of indeterminacy with his writing, opting to use each member as a mostly independent entity instead of crafting a composite as most had done. In some ways, this choice was refreshing to hear. In fact, the aperiodicity of entrances required a click track, with Gavett set up via earbud connected to iPad (which was how he viewed his scores) and conducting the others. Conducting had been employed throughout, but this was the only time it became imperative, and given how intricate the results sounded, anyone could see why.

To wrap up the day, the finale returned to the CD in the form of Guggenheim Fellow Alex Mincek’s wonderfully formed masterpiece Number May Be Defined. A loadbang staple, utilizing content from a math textbook as a way to separate necessary understanding from the resultant, Number May Be Defined is arguably the most daring work in their repertoire. Every musician has to use a mute or avant-garde extended technique, creating a highly unusual, personal soundscape, separately and ensemble; even Gavett, who being a baritone an average composer would find difficult to mute and thus not attempt to, actually utilizes a special paper towel roll with a hole in the side to act as a resonator and direct where his voice is projected. The writing ends up a testament to how a one can control the level of heterophony and homophony that can sound at one time. Mincek starts in an area of erratic spatialized entrances that are pared down from a stream of unceasing and uncontrolled sixteenth notes to almost Morton Feldman-like aperiodic guttural statements in each color, mashed with sotto voce bass clarinet, and trumpet and trombone with practice mutes shoved down the bell, to create near homogeneity. It’s quite a novel approach to writing for the quartet: demanding technical playing and fully independent parts come together to create one large stream of consciousness blended with inherent slight timbre changes of their instruments.

That last clause is a good way to describe loadbang in general. The four players who form the output are all different in production of sound. The result, being able to play relatively similarly, shouldn’t work as well as it does. Given their impressive musical ability, however, it is perfection.