By proclamation of the mayor, today is Amy Beach day in the City of Boston. As one of Boston’s best-known composers celebrates her 150th birthday, several nearby ensembles plan performances of some of her most important works. Born Amy Marcy Cheney in Henniker, NH in 1867, she moved with her family to the Boston area when she was eight, so that quality teachers could nurture her remarkable talent; she was an amazing prodigy as both a pianist and composer. Her marriage to Dr. H.H.A. Beach in 1887 required her to give up her very successful career as a pianist, but her husband did encourage her to compose. During the 23 years that she lived with Dr. Beach at 28 Commonwealth Avenue, she composed many of her best-known and most significant works.  While she published using the name Mrs. H. H. A. Beach, there is evidence that she would have preferred to be known as Amy Beach, and that has become the standard version of her appellation.

A musical original who wrote a vast amount in a range of genres, she was one of the first American composers (along with the likes of Edward MacDowell and George Chadwick) to earn international recognition, as well as one of the first (along with Arthur Foote) to succeed without the benefit of European study. Beach was also the first American woman to write in large musical forms, including her Mass in E-flat Major, op. 5, (1890), her Symphony, op. 32, “Gaelic” (1896), and her Piano Concerto op. 45 (1900), the three of which can be heard in the next few months in our area.

To be “the first” can be a suspect achievement in music, since music is an art form judged by abstract aesthetic values, not like a footrace measured by a stopwatch. Thus, these firsts would mean little if the works had not also been critically acclaimed upon their premieres and widely performed and celebrated thereafter. Beach’s music fell out of fashion and was forgotten after her death, but in recent decades it has been rediscovered with increasing enthusiasm. The pioneering performances of pianist Virginia Eskin (long based in Boston and now in southern New Hampshire), beginning in the 1970s, were particularly influential.

As part of that ongoing recovery, major new editions of three large works have been undertaken, and these serve in the performances this fall. Symphony New Hampshire will give Beach’ s “Gaelic” Symphony on Oct. 6th (Concord NH), Oct. 7th (Nashua) and Oct. 10 (Durham). (Full details and links for the events mentioned here are given at the end of this article).  In 1893 Beach became part of the dialogue about American musical identity that Antonin Dvořák prompted through his suggestion that “the future music of this country must be founded upon what are called negro melodies.” Beach countered that “we of the North should be far more likely to be influenced by the old English, Scotch or Irish songs, inherited with our literature from our ancestors.” In writing her symphony Beach drew from poignant Irish folk melodies, revealing an empathy for the plight of Irish immigrants and refugees that was atypical for the elite class of Bostonians that she had married into. Even her own song “Dark as the Night,” which she uses in the first section of the symphony, suggests the turbulent and frightening sea voyage that immigrants endured. (I draw these ideas from a recent article by Sarah Gerk, “Transnational Encounters in Amy Beach’ s ‘Gaelic’ Symphony,” as well as the biography of Beach by Adrienne Fried Block.)

The score of Beach’s Symphony was published shortly after its 1896 premiere (by the Boston Symphony Orchestra) but the hand-copied parts began to impose a significant obstacle, since modern musicians are unaccustomed to reading from manuscript. Thus the organization Women’s Philharmonic Advocacy (of which I am President), engaged Chris A. Trotman to create a new edition of the Symphony, including engraved parts and a score that has been edited following consultation of Beach’s manuscript in the Library of Congress. It comes just in time to satisfy the demand of orchestras in this anniversary year. Orchestras in Maine, Michigan, and the U.K. have played it in full recently, and the Landmarks Orchestra gave the Alla Siciliana movement at the Hatch Shell in July. (I was happy to hear the latter, which brought a soulful warmth to the outer sections, as well a delightful sparkle—possible only through the energy and precision of the orchestra—to the brisk variations). We are excited by the enthusiasm that these materials are generating and are certain that they are encouraging more interest in Beach’s works.

Beach’s monumental Mass in E-flat major (Op. 5) will be performed by the Commonwealth Chorale on November 11th, together with the New England Philharmonic.  The Mass was premiered in 1892 by the Handel and Haydn Society, so this performance commemorates both the 125th anniversary of that remarkable premiere (which placed Beach “among the foremost rank of American composers”), as well as Beach’s 150th birthday year. Again, no modern edition of the orchestral materials for the Mass existed (however a vocal score was published and is freely available); the edited orchestral score and parts have been created by Matthew Phelps and will be used in their first performance at the Nov. 11 concert. A competing edition is being prepared by Paula Zerkle of Moravian College (PA), who led a performance of the Mass in the spring. The availability of edited and engraved materials should stimulate wider interest in this work, which first brought Beach to light nationally and led to a flurry of commissions for her.

Building on the success of her Mass and Symphony, Beach wrote her op. 45 Piano Concerto, premiering it herself (as soloist) with the Boston Symphony Orchestra in 1900. The Brandeis-Wellesley Orchestra will offer the work on November 18 (Wellesley College) and 19 (Brandeis Univ.) with the brilliant soloist Randall Hodgkinson. Neal Hampton leads the orchestra, and having performed Beach’s Symphony (very impressively) with the ensemble in 2013, we can anticipate a powerful interpretation of Beach’s thrilling concerto. Conductor/scholar Laurine Celeste Fox’s new edition (available from Subito Music) encourages the performances.

And the Bach, Beethoven, Brahms Society adds another “B” to their nameplate, with Beach’s lovely, lilting waltz, Bal Masqué on September 24 at Faneuil Hall.

Though I have focused on orchestral music, Beach of course wrote many works for smaller ensembles. Chameleon Arts Ensemble has programmed one of the most beloved, the expansive and lushly chromatic Quintet for Piano and Strings in F-sharp Minor, op. 67 (1908), on Sept. 23 and 24.

Violinist Maud Powell (also celebrating her 150th birthday this year) inspired Beach’s passionate “Romance” op. 23; the two of them premiered it at the famed Chicago World’s Exposition of 1893. We can hear Dianne Pettipaw, violin and Anne Tyson, in the Romance at the Brookline Public Library on Oct. 1st.

Expect to hear more of Beach’s music as the celebration continues into 2018. And since Beach often was named as a symbol for the leaders of the Women’s Suffrage Movement, we can anticipate that Beach and her music will also help to commemorate the 100th anniversary of the passage of the 19th amendment in 2020. 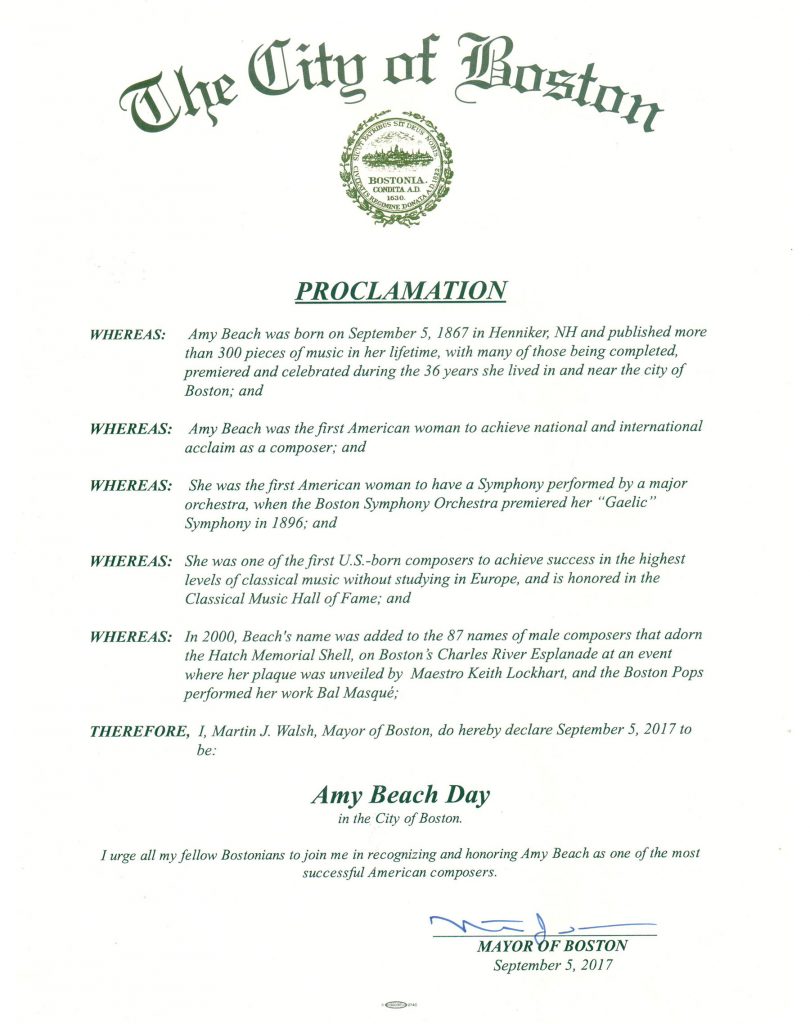