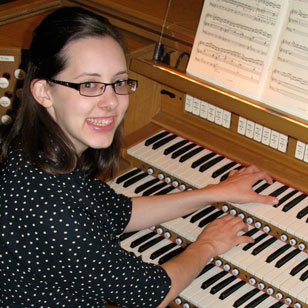 The accomplished young American organist, Katie Minion’s choice of works from early Baroque (Buxtehude) to our own day (Escaich and Laurin) made for interesting listening at the Methuen Memorial Music Hall on Wednesday. Her repertoire encompassed the familiar, the somewhat less familiar, and the esoteric. One could discern connections, if so inclined, or could simply enjoy each work on its own terms.

Rather daringly, Minion opened with one of the two most modern works on the program, “Vers l’espérance” (Towards Hope), the third of the Organ Poems by Thierry Escaich (b. 1965). Anyone interpreting the title as soothing and comforting was very quickly disabused of that notion: this technically brilliant work from 2002, skirting tonality, was characterized by terraced dynamics (though emphasizing the louder end of the spectrum), snippets of melody, and driving, vigorous rhythm. With a stirring crescendo near the end, it seemed to characterize someone relentlessly determined to find hope–and attaining it. The artist’s powerful playing made the audience sit up and take notice from the start.

Johann Sebastian Bach’s lyrically beautiful Leipzig setting of An Wasserflüssen Babylon (By the Waters of Babylon), BWV 653, made a stark contrast with the preceding work. Playing the single-pedal version (there is also one with double-pedal), the performer used a simple, effective registration: chorale tune in the tenor on the 8’ krummhorn, right-hand accompaniment on an 8’ foundation, and a 16’ bourdon in the pedal. Her rendering was akin to an older-school style of Bach performance with virtually continuous legato and little or no rhythmic inflection. For this listener, it was the single piece on the program that didn’t consistently engage attention.

The distinguished 20th-century English composer Herbert Howells (1892-1983) lost his nine-year-old son Michael to polio in 1935, a tragedy that colored much of the music he wrote for the rest of his long life. The Prelude De Profundis (1958) seems to be a particularly personal work in this vein, running the gamut from deeply introspective grief to hugely impassioned outcry. Minion chose affecting stop combinations, e.g., the accompanying string celestes in the outer sections. Usually, this organ’s celestes are employed for their lush beauty, but in this context their undulating property evoked naked emotion, as did the recitalist’s subtle lingering on certain aching chords. Despite some dense textures and characteristically complex Howells harmonies, she maintained clarity and allowed the piece’s continual major/minor ambiguity to come through. Also clearly audible was the pedal line as it drove the accelerando/crescendo to the great climax. The closing section’s desolate funeral march over repeated low F#’s in the pedal was haunting, and the final throbbing chord, both minor and major simultaneously, seemed the perfect portrayal of a mourner for whom hope is just out of reach, encompassing darkness and light.

Lightening the mood greatly was a second J. S. Bach chorale prelude, also from his Leipzig years, Allein Gott in der Höh sei Ehr (Alone to God in the Highest Be Glory), BWV 676, from the third part of the modestly titled collection “Keyboard Practice”. In this trio setting, Minion worked out a pleasing balance among the three voices, using a different mutation stop with 8’ in each hand and a nicely articulated pedal line. This account also had greater rhythmic flexibility than the previous Bach performance.

The first half closed with a literally and figuratively fiendish scherzo composed four years ago, the Etude-Caprice “Le Rire de Belzébuth” (Beelzebub’s Laugh) by Québec composer Rachel Laurin (b. 1961). The name “Beelzebub” has sometimes been used interchangeably with “Lucifer” and “Satan”, and the composer makes liberal use of dissonances and snarling reeds in this vivid character sketch. The “study-caprice” shows the demon in a sardonic mood rather than menacing. Staccato, descending figures and repeated notes depicted infernal laughter while chromatic buzzing evoked the Lord of the Flies. Minion displayed impressive footwork to meet the virtuoso demands of Laurin’s pedal part: octaves, double-pedal, trills, and a cadenza for feet alone. She also exploited a remarkably wide range of colors over this fairly brief piece, and its  rather abrupt concluding chortle drew snickers from the audience.

After intermission we heard the Praeludium in E Minor, BuxWV 142, of Dieterich Buxtehude (1637-1707), a work written around the year of J. S. Bach’s birth (1685). The term “praeludium” covers a number of forms, but generally, it consists of free, quasi-improvisatory sections alternating with stricter fugal ones. Minion’s carefully selected stop combinations were a reasonable facsimile of Baroque sounds, ranging from plenum with mixture to solo 8’ principal to quiet flutes. The octaves in the third fugue’s subject may not have been ideally clear at the performer’s brisk tempo, but this section nonetheless had the infectious rhythm of a jig which was justification enough.

Johannes Brahms used the most distant of keys (seven flats!) for his solitary Fugue in A-flat Minor, a somber piece audiences seldom get to hear. The sighing figures of the subject were moving due to Minion’s use of just an 8’ principal over a 16’ bourdon in the pedal, echoing the simple, direct registration of the second fugue of the preceding Buxtehude. Although a 4’ principal was eventually added, the piece remained intimate, never getting above mezzoforte and ultimately tapering to flutes in the right hand, soft reed in the left, and a quiet 16’ in the pedal. The mournful ending was subdued and affecting.

While the individual sounds of the E. F. Walcker organ are substantially what Max Reger (1873-1916) had in mind when writing his organ works, the richness of the Methuen ensemble and the reverberant acoustic in which it resides add to the already great challenges of Reger’s large-scale works. A Roman Catholic and a late Romantic composer, he was also a staunch devotee of J. S. Bach, adopting (while adapting) virtually all the forms that Bach used: fantasia, toccata, prelude and fugue, passacaglia, chorale prelude, etc. His often dense polyphony is more technically difficult than Bach’s partly due to cultivating virtuosity for its own sake and partly due to Reger’s much expanded harmonic vocabulary, the addition of crescendi/diminuendi to simply terraced dynamics, and daunting numbers of specified stop changes throughout most of his works. In the composer’s Fantasy on “Sleepers, Awake, a Voice Is Calling,” Op. 52, No. 2, Minion not only met these great challenges, she made compelling music as well. One could cite a large number of felicitous touches, but to name a few highlights: the dark, uneasy pppp chords of the opening section twice interrupted by fff outbursts (famously likened to “striking lightning”) to arresting effect; after a subtle accelerando, the sudden jump to electrifying fortissimo sextuplets; the quiet, expressive cantabile on a solo quintaten; the powerful reintroduction of the chorale tune amid the frenzied activity of the fugue; and of course the magnificent chords of the coda. But subtler virtues consistently remained—in particular, a degree of clarity that let us hear an unusual amount of detail in whatever texture Reger called for.

This was an uncommonly fine recital for its diversity of repertoire and the skill with which Katie Minion adapted the instrument to so many widely different styles of organ composition. She also displayed a powerful technique but almost without exception placed it at the service of the music for a range of purposes: sacred and secular, cathartic and descriptive.

Comments Off on Daring Katie Minion Daunts and Pleases