The percussion quartet NEXUS, which originated in Canada, now has a firm connection to Woodstock. Garry Kvistad, the ensemble’s newest member (only since 2002) is a Woodstocker, proprietor of Woodstock Wind Chimes which are distributed internationally, and a major league percussionist whose credits include being a long-time member of Steve Reich and Musicians. NEXUS has been featured annually at Maverick Concerts for some years, including a memorable all-Reich concert with the composer participating.

Saturday night began with Reich’s exhilarating Music for Pieces of Wood, an early example of the way this composer’s unique style began to influence the music world. As each player began, he entered the theater–except for Kvistad, who was sitting in the audience. These virtuosi handled the difficult score with confidence and verve. NEXUS members Russell Hartenberger and Bob Becker were also long-time members of Steve Reich and Musicians.

In a first half given without pauses, it was easy to tell when the Reich ended and Maverick Madness: A Group Improvisation began. NEXUS originated as an improvising ensemble, and improvisation remains a major component of its work. The varying rhythms and the sounds of a stagefull of percussion held my interest. I’m pretty sure I then detected when the improvisation dissolved into Pattern Study No. 2 by Stacey Bowers, a percussionist and composer who was guesting with the ensemble. (It was probably when Bowers began playing a piano ostinato.) I’ve always found Bowers’s involving; unfortunately, he hasn’t been writing recently, and Study No. 2 dates from 1976.

It seemed there was some more group improv after the Bowers ended, but it soon morphed into Tongues, a traditional Zimbabwean medley arranged by the ensemble. Although some of this music might have been challenging, the audience ate it up and cheered at the end of the set, which lasted about 40 minutes. 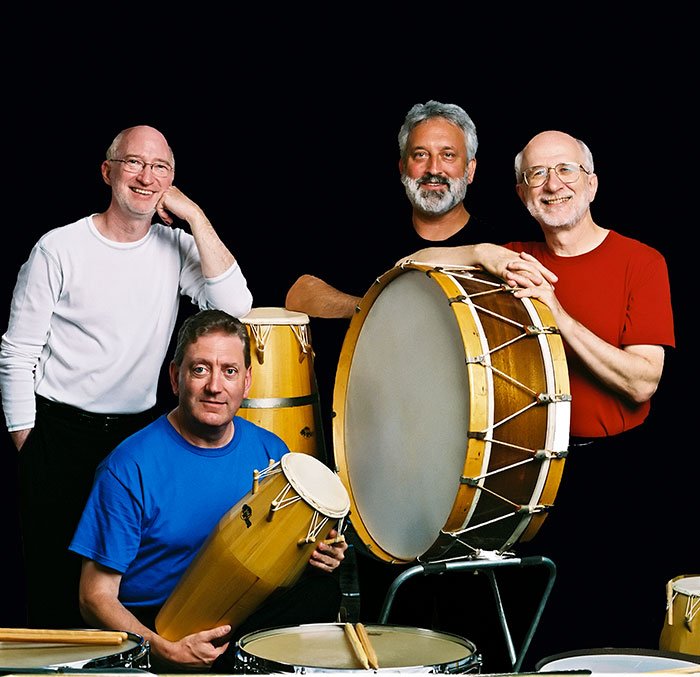 After intermission, NEXUS offered a group of “ragtime xylophone selections” by George Hamilton Green, a ragtime-era composer, xylophonist, and an amazing, major early recording artist. The also amazing Bob Becker, who has made Green’s works a special project, dazzled in all the solos. Green interests us locals because after he retired from performing, he moved to Woodstock, where he died in 1970. He is buried in the local Artists’ Cemetery. Green’s amusing oeuvre is quite lightweight, including not just ragtime, but also all pops styles of the World War I era. I probably would have been more impressed if I hadn’t heard Becker play some of this before, but I still found the selections entertaining and the Maverick audience went quite wild. NEXUS gave us an encore, a group arrangement of “Bye Bye Blackbird” with jazzy solos.

It’s easy to say that most Maverick classical programs have higher specific gravity than this one. But any show that includes something by Steve Reich is a winner with me. And it’s not often we get to hear a group of percussion virtuosi of this caliber!