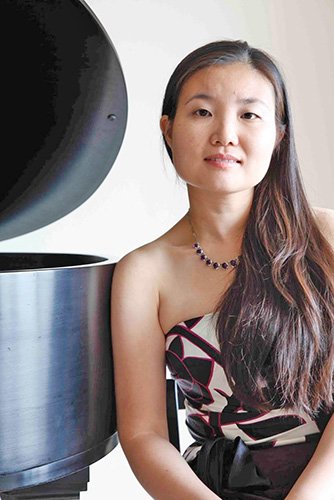 Mana Tokuno, a Japan-born pianist in her late 30s, teaches at NEC Prep. Her program last Thursday evening, the final in the Foundation for Chinese Performing Arts Summer Festival at Walnut Hill School, pleased in its conventional range (Beethoven, Schumann, Chopin) while offering something more than that in a welcome serving of early 20th-century French repertory (Faure, Debussy, Ravel, specifically from 1900 ±15 years).

Faure casually formed his numerous Barcarolles (if not for the publisher he would have called it something other), with No. 2 ambitious and questing, say the scholars. Bass and treble lap about the middle lines, in three-time. The opening sounds like something from Scotland, gondola folksongs on the loch. Tokuno made the most of it all, with a most refined and relaxed touch full of gradations and colors.

Three Debussy Book II Preludes, “Bruyères,” “La Puerta del Vino,” and “Ondine,” received, even more, a palette of pastel hues, releasing a noteworthy range of pianissimos. The Nymph in particular rippled on the water. Another impressive feat Tokuno does is play very very quietly where it’s hard to do so on many pianos, down low and way up high. Slight-seeming, these pieces actually are substantial, treating sonority innovatively, employing unconventional modes and scales, avoiding the clichés of 19th-century virtuosity (Ted Libbey).

Ravel’s Sonatine, begun for a 1903 competition, is structurally more formal but imbued throughout with that characteristically shifty feel, which Tokuno conveyed with the floatiest of approaches, even the note-packed last movement. Some throughpedaling, perhaps just overpedaling, seemed to my ear to help everything along.

It was gratifying that the French part of the offering went so satisfactorily, because the rest of the recital was not so good. Small flubs and brief memory slips aside, Tokuno appears to have little taste for or sense of long line, flow, arc.

Beethoven’s terse then lyrical Opus 90 sonata sounded piecemeal, albeit with “singing manner,” as the composer explicitly requests, but lacking strength. One nifty touch in the “wonderfully scored” (Michael Steinberg) second movement drew attention when Tokuno took the wee staccato part of the pretty melody more détaché than anyone else does.

Schumann’s Kinderszenen felt largely unidiomatic, segmented even within those brief pieces, with practically no looking ahead. “Glückes genug” and “Am Kamin” showed undulation and wholeness respectively, while “Kind im Einschlummern” had some of each. Beautiful tones did sometimes appear in the air—“Träumerei” poured forth in gorgeous simplicity—yet got vitiated with extremes of rubato, deep pauses necessitating speedups.

Watching her hands struggle a bit, I wondered if the problems could just be due to nerves. (An experienced concert pianist afterward mentioned how she’d relaxed into the works following intermission.) Strong and clean Beethoven from Tokuno can be heard online, so it could not be incapability. But she was not quite up to Chopin’s Ballade No. 1. Careful weighting and emphasis of note by note often seemed to preclude basic phrasing, yet even shapelier performance would have been hindered by the micropauses, a couple of them not so micro-. Some of the pedaling imparted magic.

The evening closed with a quiet ride in Chopin’s Barcarolle, the water messed, the gliding again piecemeal, and no long strokes. I wished there had been French encores; this night Tokuno had the touch for those, alone.