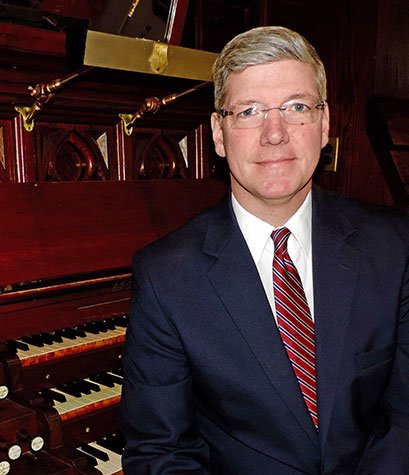 Kevin Birch, the Director of Music and Organist at Saint John’s Roman Catholic Church in Bangor, drew a respectable-sized audience for his recital at the Methuen Memorial Music Hall on Wednesday. Although the 1860 E. & G. G. Hook organ he presides over in Maine is of similar vintage to the one in Methuen (1857), they are very different instruments in scale, aesthetic, and mechanism. The latter abounds with Romantic and orchestral colors in addition to the familiar foundation, flute, and reed stops common to organs of nearly every time and locality, but the performer frequently registered conservatively, as though cautious to venture into more daring stop choices. Overall, the program was enjoyable for a diversity of repertoire and solid playing, but it might have been truly memorable if invested with a bit of derring-do and showmanship.

Dressed notably casually in open-neck dress shirt and slacks, Birch opened his program with probably its greatest technical challenge, Johann Sebastian Bach’s Toccata, Adagio, and Fugue in C Major (BWV 564). Bach surely intended anything he wrote and named “toccata” to have a prominent element of virtuosity, and the 1857 Walcker, vastly different from the organs the composer knew and wrote for, only added to the challenge. From this standpoint, the recitalist’s playing was unimpeachable with virtually no audible note-slips or blips in rhythm anywhere. The toccata’s great central pedal solo, one of Bach’s most extended and impressive, was immaculate and had an elasticity of rhythm, an element of fantasy, curiously lacking in the opening section’s hands-only passagework. Yet the largely mezzo dynamics throughout would have benefited a good deal from greater contrasts, and the fugue could have used more upperwork and mixtures to enhance polyphonic clarity—which is not, frankly, one of the strengths of this instrument. The adagio was expressive and gently Romantic (when in Rome. . . ), making use of a soft 32’ pedal flute. Birch gave the solo line here to a simple 8’ diapason which worked nicely enough in this capacity, but later, in the bridge to the fugue, it took over the whole texture and made the great dissonances of these chords truly ache. The concluding fugue features one of Bach’s most distinctive subjects, with groups of 8th– and 16th-notes alternating playfully with pregnant pauses. Playful or not, this is quite a tricky piece to play, and the artist again displayed technical mastery but less imagination as to registration; his rather relaxed tempo kept the music from dancing but allowed the contrapuntal voices to come through reasonably clearly though a less legato articulation at a livelier tempo might have achieved both ends. He commendably followed Bach’s specified 8th-note final chord, something many organists, desiring a grandly resounding ending, choose not to do and hang onto it for several beats.

The chorale prelude that followed, Wir glauben all’ an einen Gott (We All Believe in One God), was formerly thought to be by J. S. Bach but is now attributed to one of his best students, Johann Ludwig Krebs (1713-1780). It makes a stark contrast with Bach’s familiar setting of this chorale in D minor with a powerful, striding pedal line. Krebs’s setting, in a soothing G major and using double pedal throughout, does bear an intriguing resemblance to Bach’s double-pedal setting of An Wasserflüssen Babylon (By the Waters of Babylon). Birch handled the two independent pedal lines gracefully and used a handsome cornet combination for the chorale melody in the alto. This was a memorable introduction to a beautiful piece.

We then had the unusual opportunity to hear all four of Robert Schumann’s Sketches for Pedal-Piano, Op. 58. Written for an instrument almost unknown today, these works are heard almost exclusively on the organ nowadays. Allowing for the differences between a percussion instrument and a winded one with pipes and handled with care, as they generally were on this occasion, these charming miniatures work quite nicely as organ music. The first sketch (C minor) was slightly hampered by another woolly registration lacking the upperwork that might have lent more clarity to the chordal texture, but the music was diverting nonetheless. The second piece, in C major, made use of reeds and mixtures to happy result though the composer’s instruction “sehr markiert” (very marked) went largely unheeded; after a well-contrasted, quieter second section featuring chromatic “tremolos,” Birch brought the sketch to a triumphant ending. The third sketch was an attractive character piece in F minor featuring imaginative harmonies that the performer kept clear even at the specified lively tempo. The final movement, in warm D-flat major, opened so quietly that the organ’s action competed somewhat with the tone, but this was an affectionate rendering of a cozy piece and proved winning.

After intermission, the artist included one more piece of Schumann, the last of the Four Marches, Op. 76, written for a standard piano and arranged for organ by the eminent French organist, composer, and pedagogue, Alexandre Guilmant (1837-1911). This grand processional, though not the most memorable music, would be useful for occasions of pomp and circumstance. The arrangement and performance were accomplished, sounding like authentic organ music. Curiously enough, the following piece, Guilmant’s arrangement of Camille Saint-Saëns’s famous “The Swan” from Carnival of the Animals was less convincing. Taking a more activist approach, this arrangement had the originally long-sustained bass line moving around in the pedal, which robbed the piece of the beautiful serenity that is its essence. Birch (perhaps following Guilmant’s instructions) did not attempt to imitate the sound of Saint-Saëns’s solo cello, but the reed stop he chose for the left-hand tune was too prominent, almost always covering up the undulating accompaniment in the right hand. Even the coda’s angelic arpeggiated chords descending from heaven were inaudible until the solo reed was released.

It was heartwarming to see on the program a piece by Horatio Parker (1863-1919), onetime organist of Trinity Church, Copley Square, and teacher of Charles Ives. Although the quality of his organ music is fully comparable to that of his compatriots and contemporaries Arthur Foote, John Knowles Paine, and Dudley Buck, Parker’s compositions are, unaccountably, less frequently heard. The recitalist offered his “Novelette” (was this a conscious programming connection to Schumann who wrote eight Novelletten for piano?) from Op. 68. Not unlike the Schumann Sketches, this was a character piece with attractive themes and colorful harmonies. Birch had softer foundation stops and flutes alternating with chords on a light krummhorn, and his hushed ending was magical.

A mainstay of the French organ literature going back centuries is the “carillon” genre which evokes church bells. Cloches (Bells) by Marcel Fournier (1899-1963) is an example of an uncommon category: an impressionist piece for organ. A monody using a combination of chimes and a light flue stop sounding a minor sixth away, was answered by suave chords with an occasional whiff of jazz. Birch’s atmospheric performance had the gently hypnotic effect of distant bells rung in a repeating pattern.

The recital closed with the most famous work in this genre, Louis Vierne’s Carillon de Westminster, based on the well-known chimes of Big Ben. Though this is one of the most popular display pieces in the repertoire, the player’s leisurely tempo caused the build-up of excitement to depend mainly on the increasing power of the organ. When long legato lines began in the pedal, the boomy bass registration obliterated the accompanimental figure of 8ths and 16ths that supplies the work’s rhythmic energy. After the big crescendo, the pedal descended to bottom D, full organ was reached, and all 16th-note figuration congealed into a solid wall of D major. Fortunately, the sustained carillon theme in the soprano and, of course, the counter-melody thundering out in the bass were still perceptible and carried us through to the earth-shaking conclusion.

Comments Off on Enjoyable Diversity on Romantic Walcker