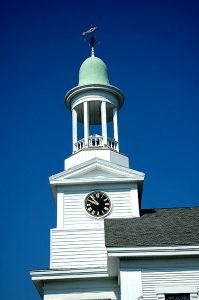 Three members of the Emerson Quartet played Mozart’s Divertimento, KV 563 at Wellfleet’s wonderful Congregational Church Monday before pianist and series co-director Jon Nakamatsu joined them in the Brahms’s Quartet in G Minor, Op 25, for piano and strings, for the Cape Cod Chamber Music Festival. They earned what is these days an unusual standing ovation: In place of the now obligatory rise-and-clap, the packed house, including many of a certain age, leapt as one to its feet, entirely unperturbed by various impediments to locomotion.

For three reasons, Mozart’s Divertimento in E-flat Major for Violin, Viola and Cello, KV 563, is rare on the concert stage. The first is that few chamber groups concentrate on the string trio repertoire. The second is that it’s incredibly demanding technically. And my first violin teacher, Max Weiser, a wonderful player, taught me long ago of the third: the Heifetz/Primrose/Feuermann recording that brought the work beyond the reach of merely mortal artists. But whatever the reason, it’s our collective loss that we hear it so rarely, and the audience was grateful that the Emerson players (minus their violinist, Philip Setzer, who needed to miss the concert) brought it into the spotlight.

Mozart wrote it at age 31 in 1788, the year that marked the completion of his final three symphonies, and there’s some evidence that he offered it as a reward to his friend and fellow Freemason, Michael Puchberg, who was helping him out financially. The six-movement masterpiece, the composer’s longest chamberwork for strings, has been well summarized by Alfred Einstein, in Mozart: His Character, His Work: “…it is a true chamber-music work, and grew to such large proportions only because it was intended to offer … something special in the way of art, invention, and good spirits. … Each instrument is primus inter pares, every note is significant, every note is a contribution to spiritual and sensuous fulfillment in sound.” Flowery writing, but apt…The work is lyrical, then deep and introspective, then virtuosic and humor-filled, and next…words fail.

Great artists have approached it quite differently, as YouTube demonstrates. The Heifetz ensemble [here] sparkles. Light of touch and fleet, it is filled with a lyrical impulse that is both subtle and captivating. Isaac Stern and his illustrious colleagues sound heavy in comparison and rather serious [here]. Kremer, Kashkashian and Ma, in their 30s, are perhaps too ready to let hormones rage [here]. Grumiaux leads a marvelous performance that many feel sets the standard [here], and Zimmerman and colleagues offers another fine recording [here]. The Emerson ensemble’s fine interpretation didn’t quite come up to those. There were a few sour notes, some intonation mismatches, at times the playing felt a bit square, and a bit more dynamic variation might have helped, but the overall achievement was admirable.

The principal problem, however, was imbalance. This ensemble seemingly neglected the precepts of primus inter pares. Eugene Drucker, the violinist, played with elan, clarity and unfailing elegance, tossing off the virtuosic challenges with just the right combination of risk-taking and achievement. And Paul Watkins, the cellist, was extraordinary. Still in his early years with the Emerson, this modest man from Wales left behind a career as a soloist in the UK. Technical challenges appear non-existent, he brings striking rhythmic impulse to his playing, and how he adapts to different composers amazes. In the Mozart he watched Drucker like a hawk, matching every impulse, fading into the background when called for, and soaring when Mozart asked him to take the lead. The only downside to his playing is that he’s so remarkable that at least this listener tends to focus on him more than he should. Sadly, Dutton, for many years the Emerson’s widely respected violist, just didn’t mesh well in the Mozart. He was aggressive, more primus than pares, often too loud when he had accompanying figures, and the light touch and precise intonation that rewards Mozart so well proved elusive, at least on this occasion. After intermission, he was just fine, but he kept the Divertimento from reaching the highest level.

Ordinarily, the balances among the Emerson foursome are terrific, so let me offer an explanatory hypothesis for what went wrong. Composers often make it tough for the “inner voices” to be heard, and violists and second fiddlers learn to be aggressive, to “play out” in order to establish good balance in the hall. Therefore, a violist might need to play more quietly than “usual” in a string trio, and unless there are good witnesses in the back of a hall passing judgment on balance during rehearsals, things can go wrong…as I felt they did on Monday night.

Mismatch among instruments may also have contributed to the trouble. Drucker has a wonderful partner for Mozart, a very early, 17th century Stradivarius whose sound is silvery, narrowly focused, and soprano. Such Strads are referred to by instrument afficiandos as “Amatise,” reflecting the form and tonal heritage of the Amati family, Strad’s forbears. In fact, the great Amati instruments are sometimes termed “Mozart violins,” signifying their wonderful affinity for Mozartean writing. Watkins plays a maggnificent mongrel instrument, with components constructed by the two greatest 18th century Venetian makers, Gofriller and Montagnana. These instruments tend to be darker, more “masculine” in voice; for many great cellists they are the outstanding “basses.” Nevertheless, Watkins’s light touch and both spare and narrow vibrato in the Mozart was the ideal match for Drucker; they played “as one.” In contrast, Dutton (as does Setzer) plays on a modern instrument created just 15 years ago by a well-regarded New York City luthier, Samuel Zygmuntowicz. No one knows how his instruments will sound 200 years later, but at least on Monday his viola was loud, unfocused, almost muddy, and it lacked elegance and nuance. With their usual four instruments, two modern, and two old, there’s balance in the renowned Emerson sound. With three attempting to partner with Mozart, I felt the modern instrument held things back quite strikingly.

No need to describe Brahms’s beloved G-minor piano quartet. It has often set the Wellfleet church audience on fire and was probably first played there by the late cellist, Bernard Greenhouse, a long-time Wellfleet resident, along with his Beaux Arts Trio colleagues and other visiting players. Nakamatsu won the Van Cliburn competition 20 years ago, and as a contestant, had to perform with another treasured contributor to the Festival, the Tokyo Quartet, whose participation ended only when it disbanded a few years ago. His chamber playing must have been exemplary then, and it has been so every time I hear him. I’m an unabashed fan. He’s chosen not to pursue daily flights, threats to his family life, and the countless other struggles that the great soloists encounter. If he had decided otherwise, no doubt in my mind that he’d be widely celebrated as among the chosen.

Nakamatsu has done the Brahms before in this setting. He told me after the concert that this time there was an hour-long rehearsal just before, and that was that. Seems unbelievable, because it had everything—drama, lyricism, rhythmic vitality, you name it. In the last movement, the raucous takeoff on Hungarian compatriots, the short break in which the players stop for Kaffee mit schlag bewitched. Nakamatsu soared; more extrovert than at other times, he must have realized his colleagues would have no trouble holding their own. And they didn’t. Watkins was again exemplary; Dutton’s viola sang much more happily in the thick Brahmsian texture. In the Intermezzo, the movement in which the strings use mutes, the threesome sounded as one. And Drucker again was fine, although here a late Strad would have helped avoid a few moments when his sound was overwhelmed by a concert-grand Steinway at full stick played by a man whose hands pounced from two feet above the keyboard when Brahms urged fortissimo.

What a grand outing in Wellfleet!

Tom Delbanco is the Koplow-Tullis Professor of General Medicine and Primary Care at Harvard Medical School and Beth Israel Deaconess Hospital. An avid violinist since age nine, he has particular interest in the evolution of stringed instruments from the 16th century on.

Comments Off on Emersons Adventure Minus One