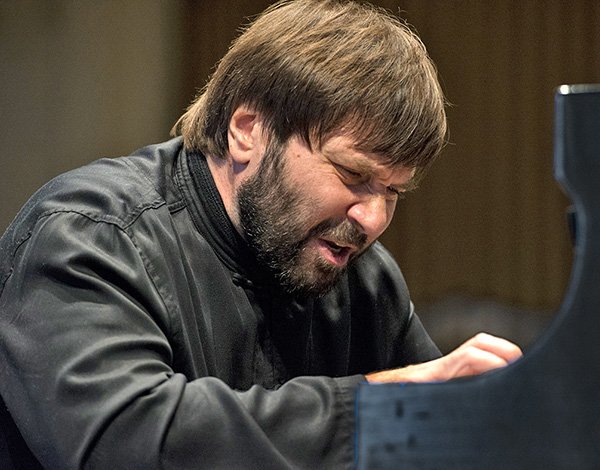 Whether or not it’s chiefly a matter of age, with the commanding and articulate presentation of pianist Alexander Korsantia, we reach another level of musical maturity. In his 50s, this Republic of Georgia-born NEC faculty member gave an ear-popping and—for me though not for everyone—soul-stirring recital Tuesday evening in the Foundation for Chinese Performing Arts Summer Festival at the Walnut Hill School.

Beethoven’s Opus 34 Variations, from the composer’s early 30s, innovated. The theme is original, and a different key assigned to each variation, something Beethoven asked the publisher to hype. Korsantia offers a pointed, comparatively delicate rendition online, while this one sounded rather more rugged but still “finely etched with a sharp acid resist,” as a fellow piano maven put it. An auspicious start.

Korsantia has performed Mussorgsky’s suite Pictures at an Exhibition so often that it’s odd he has not officially recorded it. I wish he would already. This presentation was prodigious, overturning. The maven, still with the graphic artist imagery: “A skillful engraver’s elegant and closely spaced lines depicted a relief map of a museum of the Russian soul, containing his own distinctive gallery of rogues, gnomes, chickens, Jews, and monumental gates. Incense wafted and bells rang in dynamic graduations of patrician discernment. Korsantia vaped vanishing pianissimos and muscled big gestures with massive brawn.” I myself thought more of stonemasonry: lapidary muscle. For audio memory alone, I harked back to Kirill Gerstein a year ago, as forceful pianism as I had heard in a very long time if ever. Korsantia’s sound seemed even more immense, not only profoundly loud but also majestically richer. I can’t recall piano production like his thundering, measured “Heroes’ Gate at Kiev.” Even the pedal work was chiseled in definitive fashion. This mason goes on my pianist shortlist.

A small but vivid sense of the depth and sensitivity of Korsantia’s sonority may be heard here and here. But no Pictures.

The evening concluded with the overpresented Schubert B-flat Sonata. But who can experience that sublime thing too often? Korsantia’s probed, plotted, modulated take gripped me from the very first rumbling roll, strangely slow, less a horizon event than a solemn comment on the drawn melody. The Andante’s lost, haunting shifts of enharmony made one ask what keys can we count on, ultimately: one heard droplets of blood, ineffably sad. Even with unearthly lightness and some pointed pauses, Korsantia conveyed the last two movements in due irritation, the composer losing patience with ache and telling all, “I’m done expressing and explaining, okay?”

There are other responses. The maven: “missing simplicity … dry-eyed … more about sound than soul.” This gustibus difference caused me to ponder if musicians ever pay heed to review observations and attempt adjustment. Over a decade ago writeups from two knowing keyboard critics split the difference on Korsantia. Richard Dyer, whom the maven echoes, felt (in 2004) “there is no in-between in Korsantia’s playing … leaves nuance behind when he goes into overdrive.” A few years later, however, Ellen Pfeifer found, like this writer, “poetry … [Korsantia] confide[s] the most intimate secrets of the heart.”

Regardless, the buzzkill encore, a silly ditty of a Schubert waltz, felt particularly bathetic after the Sonata in B-flat. Fortunately, it did not touch the Mussorgsky edifices hanging still in the summer night.

Comments Off on Korsantia’s Musical Masonry