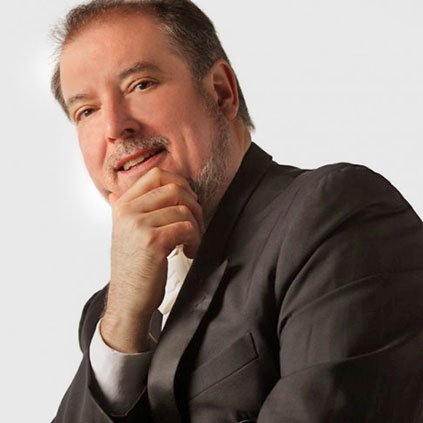 Winner of the 1966 Busoni Competition and the 1970 Chopin International Competition, American pianist Garrick Ohlsson has enjoyed a lengthy and acclaimed career. His July 6th visit to Rockport’s Shalin Liu Performance Center conveyed somewhat unexpected variety, comprising as it did, only two composers, the unlikely program-mates Schubert and Scriabin. Two late sonatas of the former composer bookended the middle section of five works of the latter, representing his early, middle, and late styles. These well-chosen selections provided studies in contrast between the composers, of course, but also among the pieces of each.

Schubert’s Sonata No. 14 in A Minor, Op. 143 (from 1823) drew us in at the start. Ohlsson stated its mostly bare-octaves theme with subdued unease, but soon enough menacing bass trills introduced a fortissimo elaboration. The artist’s sovereign command of touch brought about a fascinating interplay between the sometimes quiet, sometimes volcanic but ever agitated first theme and the soothingly lyrical second theme. One might expect combining elements from both (e.g., the elaborated first theme’s dotted rhythms used to accompany the gentle second theme) would be problematic, but the performer’s careful voicing achieved it naturally. The second movement’s sweet tune, in the unexpected key of F major, seemed like call-and-response for which Ohlsson used two types of tone: simple and pellucid at the outset and distant and velvety (with soft pedal) for the answering figure. Even in what would normally be an oasis of calm, there was an irruption of fiery passion in triplets and chords; again, when the initial theme returned, it retained the triplets (much softer) as a variant accompaniment. The sonata’s technical brilliance is mostly reserved for the third and final movement. A scurrying moto perpetuo of triplets, hands pursuing each other, alternated with detached, vehement chords and runs. An expressive second tune (initially also in F major) sang out legato but without entirely banishing the surrounding turbulence. As before, the pianist impressed with his wide-ranging gradations of tone, articulation, and dynamics. In the coda the first-theme triplets recurred in double octaves, and four bass-heavy, Beethovenian chords were the unrelenting ending.

And then, leaping forward nearly a century, the second group gave us five pieces of Alexander Scriabin (1872-1915), chronologically jumbled, as though to indicate that the unifying threads of the maverick composer’s various periods were pretty thin. Better the pianist was implying, to enjoy the uniqueness of each than to attempt to parse the not-very-linear evolution. The latest came first, the Etude, Op. 65, No. 1 (1912), which utilized non-stop parallel ninths, sometimes complex polyrhythms, and little or no tonal center. As ever, Ohlsson kept the texture clear with careful pedaling, and conveyed Romantic style as it transitioned to contemporary; the effect was not unlike listening to a person recite beautifully in a foreign language. He next gave us the earliest example, the Etude in D-Flat Major, Op. 8, No. 10, and it came as a surprise that, as early as 1894, Scriabin was already stretching the limits of tonality. The virtuoso handled with ease the chromatic wilderness of thirds in the right hand in both delicate staccato and silky legato. Towards the end he built to a brilliant display as his hands moved in contrary motion before tapering off to pianissimo. One would hardly guess that this work came from the same set as the composer’s most famous, the Etude in D-Sharp Minor, Op. 8, No. 12, a heaven-storming display that could almost be Chopin.

Scriabin’s Prelude, Op. 59, No. 2 (1910-11) seemed, if anything, harmonically more advanced than the étude from 1912, indeed fully atonal. It was essentially a pattern of rhythmic and quasi-melodic motifs, well played but opaque to those not granted to penetrate late Scriabin’s distinctive brand of mysticism. The Poème, Op. 32, No. 1 (1903), on the other hand, enchanted with its yearning, dreamy melodies and seductive harmonies reminiscent of those of Debussy, and Ohlsson’s iridescent tone was captivating. Scriabin wrote ten piano sonatas, single movements but larger in scale than the preludes and études, and we heard No. 5, Op. 53 (1907). This work, transitioning into his final period, uses his trademark super-heated harmony but mostly stays just barely within the bounds of tonality. In the artist’s hands, the sonata limned a vast emotional range, with hushed passages sometimes growing gradually to climaxes, other times erupting suddenly with huge sounds. The composer demands great virtuosity here, building to a frenzy before abruptly breaking off without a definitive final cadence. Ohlsson won the day with unflagging conviction and brilliant technique.

Schubert’s penultimate sonata, No. 20 in A Major, rounded off the recital. Though written two months before the composer’s early death, this work is charged with life, and the performer made a bold, virile statement of the opening chords. The second theme, by contrast, was elastic and expressive. Schubert’s individual way with harmonies and modulations was frequently present, and Ohlsson allowed them enough time to register clearly even at a brisk tempo. The second movement, in F-sharp minor, begins mournfully with sighing figures but before long morphs unexpectedly into a passage full of technical display—32nd and even 64th notes—before settling back into an elaborated version of the first theme. Ohlsson’s thoughtful execution made these potentially treacherous transitions smooth and convincing; the reprise of the first tune seemed like the da capo of a Baroque opera aria. His subtly humorous approach to the third movement’s arpeggiated triads and detached articulation made it a delightful hybrid of scherzo and playful Viennese waltz. The trio provided a spectacle des mains with its nearly constant hand-crossings. The final movement, Rondo, opens with a simple, endearing tune, a quality that remained consistent throughout the more ornate variations that followed. In the first episode, Ohlsson’s exceptional dynamic control subtly highlighted Schubert’s unconventional harmonic progressions. The second episode, darker and stormier, still gave way convincingly to a gentle reprise of the rondo theme in the treble. At the end a brief coda brought back a quick reminiscence of the first movement’s opening chords, furnishing symmetry and an emphatic ending.

Ohlsson rewarded the extended standing ovation with a single encore, Brahms’s Intermezzo in E Major, Op. 116, No. 6, making it memorable with cushioned tone and exquisite chord voicing in the outer sections; the middle section’s slightly increased motion evoked perhaps streams of water spilling gently over rocks in a brook while the artist’s pedalwork kept the texture both legato and transparent. In this work, as throughout, the special narrative aspect of Garrick Ohlsson’s playing lingers in the mind.

Comments Off on Pianist Rewards with Narrative Warmth