Much of repertoire in “Carnivalesque,” offered for BEMF patrons by the talented Italian group Micrologus on Wednesday, June 14th at Jordan Hall, is available on one of the ensemble’s discs, but the acerbic wit and outrageous hi-jinks of “Sex, Lies, and Musical Tales” has to be experienced in on-stage performance to be savored fully. Soprano Patrizia Bovi conceived and directed the program, which centered on a group of late 15th-century frottole and villotte, part songs in rustic style such as were performed in comic interludes at Italian aristocratic entertainments. Each group explored the adventures of well-known characters who were later to become stock figures in the world of the commedia dell’arte: the lovelorn couple whose marriage is thwarted by an old hag; the unhappily married young woman; the despised old hag herself; Scaramella, who goes off to war and gets into all sorts of scrapes; Feragu, the perpetual Don Juan. Bovi, who sang soprano and also played a medieval harp, was joined by Andrés Montilla-Accurero, alto, Simone Sorini, tenor and lute singer, and Enea Sorini, bass and percussionist. Additional instrumental color was provided by Goffredo Degli Esposti, expertly wielding a one-handed pipe and tabor (small drum) as well as a recorder, string drum, and sordellino (a small keyed bagpipe with an arm crank to feed its air supply); Gabriele Russo, viola da braccio (arm-held viol) and rebec (medieval bowed fiddle), Gianni La Marca, viol, Gabriele Miracle, dulcimer and percussion, Leah Stuttard, bray harp, and Crawford Young, lute.

A striking figure in black pleated jacket and high-heeled red shoes, Bovi propelled her cavorting musicians around the stage like street entertainers in perpetual motion. From the bare-bones notation of early prints and manuscripts, she explored the melodic and rhythmic implications of straightforward vocal melodies (typically shifting in 6/4 meter between 2 x 3 and 3 x 2, with phrase endings marked by repeated notes) in improvisatory variations that were always convincing; instrumental variations on the same tunes allowed the players full range to explore their own antic virtuosity. Texts and translations supplied in the program book allowed us at least a peek at the double-entendres couched in one dialect or another, delivered at breathtaking speed and with many winks and nods. The point, however, was not to catch every word but to revel in the imaginary recreation of a lively pseudo-rustic tradition that once delighted sophisticated audiences. Bovi’s high-energy oratorical delivery with appropriate gestures reached a high point in the malmaritata (unhappily married) songs in which a series of solo verses culminated with all four singers taunting the jealous husband as he sweetly sang the cuckold’s song (cocu, cocu). A French musician active in Italy, Loyset Compère was not above composing his own frottola on the malmaritata theme, explored in a series of exquisite variations by lutenist Crawford Young. This quiet interlude showed us another side of the frottola tradition: as a source for chamber music in an intimate setting. Unfortunately, however, the Renaissance lute’s relatively thin sound tended to get swallowed up in Jordan Hall. Bovi concluded the malmaritata series with a rousing refrain song “Fate d’arera e non t’acostar in’zà” (Get away, and don’t touch me there!) sung to the accompaniment of two lutes. 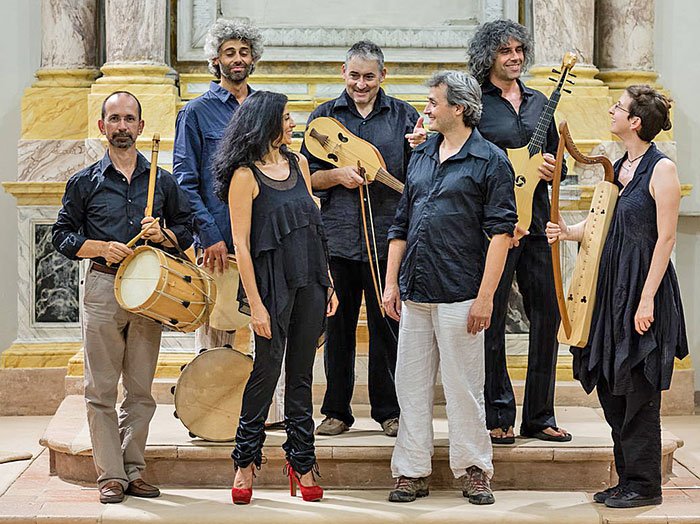 Inveighing against the old hag who bars access to a young woman, Montilla-Accurero and Sorini introduced a new sonority: alto and tenor supported by sordellino, viol, and lute. The remarkable sound of the sordellino on its own was demonstrated by Degli Esposti in a set of dance variations from a manuscript tablature devoted entirely to this instrument. The nastiest condemnation of the spiteful old hags was delivered by all four voices with percussion accompaniment in a villanesca by none other than Adrian Willaert, Flemish-born maestro di cappella at St. Mark’s and composer of numerous Masses and motets as well as learned madrigals and French chansons. Songs on the adventures of the rascal Scaramella and the eternal lover Feragu alternated with variations devised by Micrologus on the moresca (Moorish or exotic) dances that were a common feature at Renaissance banquets. The height of outrageous behavior was invoked in the raunchy rolling-pin and bread-stick dances of the final group based on arrangements of popular tunes. Two extravagant quodlibets, “Vrai Dieu d’amour” (True god of Love) and “Fortuna d’un gran tempo” (Fortune for a long time), concluded this delightful evening, a truly remarkable demonstration of scholarship in the service of a lost tradition revived.