Georg Philipp Telemann—composer of operas, dramatic oratorios, and around 30 sacred cantata cycles, not to mention a substantial number of German songs and a large body of chamber music for various instrumental combinations—overshadowed J. S. Bach in the view of his contemporaries as Germany’s leading composer in the decades from 1720 to 1760. Well attuned to newly fashionable Italian and French trends in German court circles, Telemann was also on the lookout to refresh his own musical language in any way he could. In addition to holding official positions in Leipzig, Eisenach, Frankfurt, and Hamburg, he spent time at the court of Sorau in eastern Saxony, and from there travelled to Upper Silesia and Kraków. The composer himself wrote about his admiration for Polish folk music: “One evening with those fiddlers gave me enough inspiration for the rest of my life.” Telemann’s encounter with Polish folk music provided the framework for the astonishing concert by Solamente Naturali on Monday afternoon at Jordan Hall for the Boston Early Music Festival.

Combining historically-informed performance with a lively and still-alive practice of collective improvisation in the hands of superbly talented musicians, the ensemble injected notes of joyous optimism into the Festival playbook.

Multi-talented Miloš Valent (violin, viola, and voice and artistic leader) and the group’s principal soloist Jan Rokyta (cimbalom, recorders, duduk,clarinet, and voice) were joined by equally versatile colleagues Dagmar Valentová (violin and voice), Peter Vrbincik (viola and voice), Juraj Kovác (cello and voice), Tibor Nagy (double bass), Soma Dinyés (harpsichord), and Baykal Dogan (percussion) in Telemann compositions inspired by Slavic folk music interspersed with East European and Turkish songs and dances from Slovak manuscripts. Most of these sources contain only a single notated musical line for each piece. Providing the tunes with appropriate harmonization and vivid instrumental color called on Valent’s understanding of Baroque traditions of instrumental improvisation along with deep experience in folk music and improvisation on the part of all the musicians as they “leaned in” to one another in an amazing display of apparently spontaneous (but no doubt well-experienced) collaboration.

Fiddling a dance tune and its drone accompaniment, Valent entered the stage to be joined by his colleagues in a mood-setting introduction. In the first set, “Polish,” concerto movements and dances by Telemann alternated with anonymous dances. Rokyta’s virtuosic descant recorder were a highlight of this section. Then “Westy,” took us further afield to Russia and the New World: Telemann’s “Les Muscovites” with thumping heavy strings, and “L’Espérance de Mississippi” ending in a brilliant recorder cadenza; to the British Isles with a Hornpipe from Playford’s The Division Violin and “Scotch Humour” as understood by Nicola Matteis; in “Hungaricus,” viola and recorder played off each other over a ground bass on plucked cello and double bass. “Barbaro” began with expert clapping in intricate Hungarian rhythms. Here Rokyta showed off the piercing tones of his folk clarinet in a dance based on a 3 + 3 + 2 pattern, while Telemann’s “Les Janissaires” recalled the jangling sonorities of the Ottoman sultan’s military orchestra. 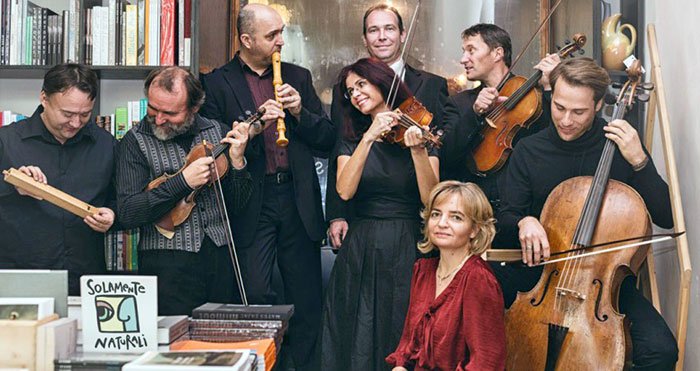 After the intermission, “Euro-Ashkenaz” featured four dances from the East European Jewish tradition. In the first, Valent fiddled a mournful tune over an ostinato accompaniment that included the alto recorder. In the second, Rokyta played the cimbalom for all it was worth, starting with a slow introduction and working up to dizzying speed in a frenzy of intricate ornamentation. “Hungaria” started off with a march by Telemann in German Baroque style that quickly merged into a “Verbung per il Violino,” a version of a traditional recruiting dance. After an Adagio interlude for violin and cimbalom, percussionist Baykal Dogan took us by surprise, suddenly appearing at the front of the stage to perform, prestissimo, a super-high-energy thigh-slapping, high-stepping dance. To top it off, a member of the audience hopped on stage to join him in an apparently impromptu contest. (As I learned later, both men are well-known professional folk dancers and teachers in the Boston area.) Returning to his post as solo percussionist, Dogan engaged in yet another dazzling display of drum-spinning virtuosity as the audience cheered wildly.

“Anatolia,” the final group of dances, started off with Telemann’s “Mezzetin en Turc,” which might be construed as a sly reference to the stock tragicomic character of the Italian Commedia dell’arte tradition immortalized in a painting by Watteau, but familiar to many popular cultures. In the three Turkish dances that followed, Rokyta played the duduk, a traditional Armenian double-reed instrument of amazing expressive capacity. We heard it first alone, then in unison with the cello, and finally accompanied by the string ensemble and a big snare drum that was more than a match for its shrill tones. Telemann’s “Les Turcs,” in gigue rhythm, seemed almost tame by contrast.