Among his many accomplishments over the years bass-baritone Donald Wilkinson certainly stole the show as Osmin in Emanuel Music’s “Abduction” two years ago. (See my 2015 review here). His vocal artistry was top-drawer, and his characterization of the emotionally rigid Osman, whom Mozart described as “stupid, surly, malicious,” was strangely haunting. Osmin’s Act 3 aria, “O, wie will ich triumphieren,” includes unusually difficult coloratura passage work, and twice goes down to a low D.) Soon after that, I attended an evening of his Nahant Music Festival, where I had the pleasure of hearing the young singers he was coaching.

On my return to the Nahant Festival (see BMInt interview here) on Saturday night at St. Thomas Church, I once again heard the apprentices and had the great pleasure of hearing Wilkinson sing an engaging new song cycle based on the writings of James Audubon. Anyone who knows Wilkinson knows of his great passion for birds. The Emanuel Music website describes this well:

Papageno is a role close to Wilkinson’s heart because he identifies with the bird-catcher whose whistle attracts birds. Next to music, Wilkinson’s great love is bird watching, a pastime he began in the Berkshires when he was a Tanglewood fellow. “I’d get up at 6:00 in the morning, when everyone else was asleep, and go out with my library copy of Peterson’s bird guide. I was astounded at the number and variety of birds to see—I’d been living in Brighton, where there weren’t many bird-watching opportunities. Now I’ve seen 699 North American bird species—just one short of my goal of 700.” Wilkinson’s musician’s ear makes it easy for him to hear and identify birds by their calls. He was touched when Craig Smith put together a set of seven bird-related songs expressly for Wilkinson to sing at one of the Schubert chamber concerts. He sings this song cycle in recitals even today. 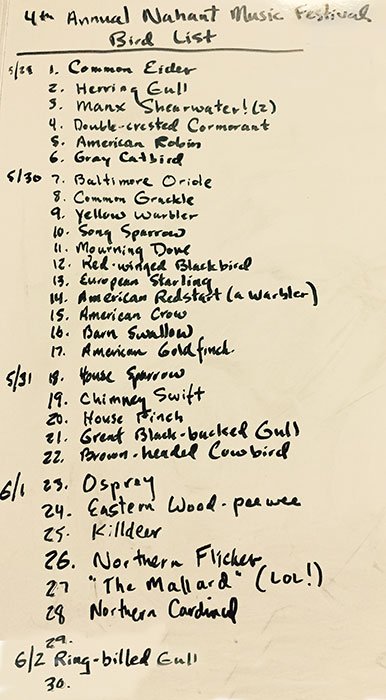 Music and birding come together as well when Wilkinson has the privilege to travel as a performer. He has sung with the Boston Camerata since 1991, and these jobs have brought him to Europe, Australia, and New Zealand. Wherever he travels, Wilkinson goes birding, and new technology helps him find and identify birds in any location. Wilkinson uses a smart phone application to enter the name of a bird he hopes to see so he can learn where that bird was last sighted. He uses another application to play a bird call, because the simulated call often attracts real birds. And when music tours don’t bring Wilkinson to new birding adventures, he organizes birding tours where he leads others in his beloved pastime.

Those of us who are Wilkinson’s Facebook friends have been treated the past weeks to his delightful Bird of the Day photos and back stories, and there was even a list in the church basement of birds spotted by festival participants.

Audubon’s Birds, commissioned by Wilkinson, uses texts in its seven songs taken verbatim from the journals of John James Audubon’s journals.  The songs were composed by seven different composers, four of whom were in attendance. Wilkinson spoke charmingly about each of the birds before singing Audubon’s descriptions, from Blue-capped Chickadee, “one of the friendliest,” the Hermit Thrush with its two voice boxes, to the Pleated Woodpecker, whom he saw as a voice student at Tanglewood 27 years earlier, and who remains his favorite bird. He marveled at the Wild Turkey, “so majestic,” and deftly imitated a few calls. The composers were Kathy Wonson Eddy, Francine Trester, Eric Sawyer, Lewis Sprattan, Frank Pesci, Allen Torres Castillo, and Yi Yiing Chen. Wilkinson was in beautiful voice, and Kibbe played was a perfect avian partner. I thoroughly enjoyed the first six songs, but loved the concluding Wild Turkey (whose males are commonly called Gobblers) and its fun music by Yi Yiing Chen. Audubon’s text reads, in part:

When they come upon a river, they betake themselves to the highest eminences, and there often remain a day or sometimes two, as if for the purpose of consultation. During this time, the males are heard gobbling, calling, and making much ado, and are seen strutting about, as if to raise their courage to a pitch befitting the emergency. (A big bird noise startles the audience).  Even females and young assume something of the same pompous demeanor, spread out their tales, and run around each other, purring loudly and performing extravagant leaps. (another bird noise erupts).

Another fun song that included a wood block player punctuating the text was “Pileated Woodpecker,” “cackling out its laughter-like tones.” I certainly hope Wilkinson and Kibbe have more chances to perform this enchanting work.

Nahant Calling featured 12 poems and music by Francine Trester, who also wrote music for “Blackburnian Warbler” in “Audubons Birds.” Trester gave a talk before the performance explaining how the twelve short Nahant-themed pieces came into being. Each poem-song gave the vocal apprentices (Jenna Rae Lorusso, Alexandra Whitfield, Samantha Stiner, Rachel Abrams, Sam Strickland, Brian Sussman, Ari Nieh, and Brandon Mecklenburg) to show off their voices and acting. The three instrumentalists—pianist Timothy Steele, oboist Peggy Pearson, and harpist Martha Moor—had interesting, well-written parts, although it’s always hazardous to write for harp and piano simultaneously; the harp invariably gets drowned out. Still, harpists are grateful for being remembered and composed for, and Trester knew how to write colorfully for this instrument. I enjoyed all of the performances, including the last song which featured all the apprentices as well as Donald Wilkinson, “Legend of Swallows Cave.” Each of the three instruments got a solo turn with a singer and the number of singers varied in each song, which was a good idea. I must admit I enjoyed the songs, but loved the evocative poems. What a charming introduction to this “island, this reach of no man’s land…. Only one of four Massachusetts towns To touch Only one Other Town” (from “Solitude” for oboe and Samantha Stiner).

Thanks to Music Director Don Wilkinson, I will be returning to the shores of Nahant each June to check out this festival and its dedicated (and lucky) students. It’s a lovely way to start the Summer Music Season. Bravi all.

Comments Off on Music and Birding