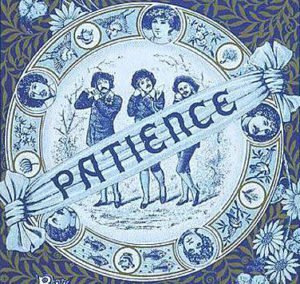 Steven Ledbetter enlarges herein on his program notes for a New York City Opera production from the late 90s.

The aesthetic movement had been in full swing for nearly 20 years before W. S. Gilbert decided, in 1880, to make it the subject of a comic opera. Aestheticism had been the work of a group of artists and writers aiming to break away from the drabness of everyday Victorian life. They brought a new freedom and color into the arts.

William Morris wrote poems based on old Nordic sources—as far from Victorian respectability as he could get. Edward Burne-Jones tried to escape the classical traditions of Raphael by designing stained-glass windows inspired by the work of Raphael’s predecessors, Botticelli and Fra Angelico. Swinburne’s poetry was rich and turbulent, filled with images that rigid Victorians surely found uncomfortably (or enticingly) erotic. Morris and Swinburne were already established in the early 1860s, and by 1872 Whistler’s most famous painting, “The Artist’s Mother,” was hung in the Royal Academy Exhibition. It is from the painters and designers that this movement gets its name: Pre-Raphaelite. (And the influences of Botticelli and Fra Angelico will be reflected in Patience in the exclamation of delight from Lady Saphir when she sees that the three Dragoon officers have put on aesthetic garb in an attempt to win their hearts: “How Botticellian! How Fra Angelican!”)  As often happens with movements that represent a considerable break from an established past, a horde of followers took over, disciples whose exaggerations made ridiculous the very art they supposed themselves to be emulating. Precisely this sort of thing was happening by the late 1870s. A bizarre mixture of medievalism and orientalism made up the popular style. London salons were filled with drooping ladies and men imitating the “medieval” attitudes of a Burne-Jones painting. Japanese decoration mixed with imitations of early English styles.

Worst of all, perhaps, the language of these disciples had become an appalling precious slang. The words that Gilbert puts into the mouths of his “aesthetic” ladies are almost literal reproductions of the style. The subject was ripe for ridicule. Indeed, Gilbert was not the first to perceive this. George du Maurier had created Jellaby Postlethwaite, an aesthetic poseur, for a series of cartoons in Punch. And F.C. Burnand’s play The Colonel was so similar in theme to Patience that Gilbert felt called upon to inform the public that he had completed his own libretto some months before Burnand’s piece opened.

Gilbert had difficulties in shaping the new work—the first to follow upon the great successes of HMS Pinafore and The Pirates of Penzance. He proposed to Sullivan an opera libretto based largely on his “Bab” Ballad The Rival Curates, published in Fun in 1867. The nonsense poem treats of an insipid curate whose sole fame is his reputation for mildness. Upon discovering that the neighboring parish has a curate who is even more insipid, he orders the other, on pain of assassination, to “play croquet, smoke, and dance.” The rival is delighted to have found, at long last, an excuse to change his dull existence. “Now that excuse has come—I do it on compulsion.”

Gilbert’s first plan was to convert the curates into aesthetic poets, but he apparently decided that it would be difficult to get the chorus “to dress and make up aesthetically,” and the costumes that would have to be designed and constructed would strain the production budget.Yet the more he worked on the libretto, the clearer it became that making fun of two clerics would open him to charges of irreverence. So, in the end, with the libretto about two-thirds written, he wrote to Sullivan, “I much mistrust the clerical element,” and turned the rivals back into aesthetic poets. A few lines, such as Lady Jane’s “Your style is much too sanctified, your cut is too canonical,” still recall the earlier plan.

Sullivan’s score shows a wonderful control of mood, especially in the opening scenes and their contrast between the drooping, “aesthetic” ladies in pale pastel costumes with pastel music (strings and woodwinds, which Sullivan employed with a mastery that he had learned from Mozart and Mendelssohn) and the martial music of the strapping soldiers in their uniforms of “red and yellow—primary colors!” (As the son of a military bandmaster, the brass music came as second nature.

Sullivan’s musical wit mirrors Gilbert’s in such masterful numbers as the trio of officers attempting to become—or at least appear—”aesthetic” so as to win the hearts of the ladies; it remains one of the funniest ensemble numbers in the entire G&S canon. Another mark of Sullivan’s mastery at word-setting was offered by Gilbert in the unpretentious little duet “Long years ago” between Patience and Angela, in which each verse ends with the line, “He was a litte boy”—and in each case, the emphasis is on a different word in the line (he, was, little, and boy) with changing significance. Sullivan followed Gilbert’s lead with a flexible melody that perfectly captures the changing accentuation, yet without the slightest sense of strain.

Bunthorne’s dramatic entrance recitative “Am I alone and unobserved?” is a delicious parody of grand operatic style (which Sullivan knew well as the editor of Boosey’s series of vocal scores of all the standard repertory works of his day). Lady Jane’s recitative with her cello eventually develops an energetic outburst that may well be a parody of the baritone recitative—with energetic double-bass responses—in the last movement of Beethoven’s Ninth Symphony.

If the ladies opening chorus already evokes the pastel colors of the orchestra the first-act finale, in which the “merry cymbals sound” to “pipe Pandaean pleasure,” strikes a new note in Sullivan’s work, an altogether luscious combination of cool instrumental colors sounding “a gay but classic measure.”

Patience opened at the Opéra-Comique on April 23, 1881. It was the last Gilbert and Sullivan production to open in that house. Their manager, Richard D’Oyly Carte, was building a theater designed primarily for the works of this successful duo, a bigger and better theater seating nearly 1300, the first theater in the world to be illuminated entirely by electricity. (We who have never had to suffer through a performance in a hall lighted by oxygen-guzzling gas lamps can have little idea of how delight the innovation was for those first audiences, who exclaimed that for the first time the air in the theater remained cool and unstuffy to the end of the performance.) This was the Savoy Theater, to which Patience was transferred partway through its run (on October 10), and in which all future Gilbert and Sullivan operas were premiered. Eventually the entire series of Gilbert and Sullivan’s work eventually came to be called the Savoy Operas.

It has been generally assumed that Oscar Wilde was the model for Bunthorne. Actually Gilbert’s “fleshly poet” was a composite of several figures in the aesthetic movement: Whistler (whose monocle and hair—long and black streaked with a lock of white—have been the traditional make-up for Bunthorne), William Morris (“such a judge of blue-and-white and other kinds of pottery”), Burne-Jones (“stained-glass attitudes”) and Swinburne (of whom Bunthorne’s poetry seems to be a parody).

It was D’Oyly Carte who had the most to do with connecting Oscar Wilde and Bunthorne in the popular mind. Carte was a born showman. He happened to be the manager of Oscar Wilde’s lecture tours as well as of Gilbert and Sullivan’s opera company, and he turned this fact to the advantage of them all. Wilde was certainly the newest of the aesthetic leaders, a young man fresh out of Oxford who had come to set London on its ear.

Wilde had been in the audience for the opening night of Patience, and D’Oyly Carte made sure that he was in the audience when the show re-opened at the Savoy. Since Wilde was soon to leave on a lecture tour in America at about the time of Patience, Carte managed a superb publicity coup that benefited both the lecturer and the comic opera. As he wrote to his secretary in New York, “I told [Wilde] he must not mind my using a little bunkum to push him in America.” Once it was reported that Wilde was the original of Bunthorne in the new Gilbert and Sullivan piece, audiences naturally flocked to hear him speak, if only so as to understand what Patience was all about. And precisely because they had seen Wilde, they then had to buy tickets for a performance of the show to see what Gilbert and Sullivan had done with this exotic character.

When Patience first opened, reviewers doubted that it would have the lasting power of the earlier Gilbert and Sullivan successes. HMS Pinafore might have its lifetime measured in years, The Pirates of Penzance in months, opined one critic. But Patience would pass away as soon as the aesthetic craze itself had been forgotten. That critic could hardly have been more wrong. More even than the two earlier successes, Patience satirizes not an institution like the British Navy in Pinafore or the “noblemen who have gone wrong” in Pirates, but rather a nearly universal human trait: pretense for the purpose of achieving a goal. Bunthorne pretends to be aesthetic to win the favor of the ladies; Grosvenor also appears as aesthetic at first, though not with any obvious end in mind, and he achieves his goal when he is happily forced to give up his aestheticism.

The theme of pretending to be something one is not becomes even more frequent in later G&S operettas. Whether it is as simple as young men putting on female outfits to invade a women’s university (Princess Ida) or a wealthy young man insisting that he is “diffident, modest, and shy” as the climactic line of a song in which he recounts—over three stanzas—his cleverness, his intellectual brain, his good looks,  his talents as both poet and painter and singer and playing an instrument. 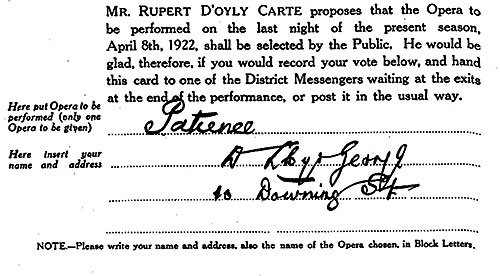 It is hardly surprising the figures in public life, like a certain British Prime Minister, should be exceptionally fond of this revealing satire. The aesthetic movement was long past when, late in the 1921-22 season at the Savoy, Rupert d’Oyly Carte (who had inherited the company from his father) handed out ballots asking audience members to vote for the opera they wished to see on the night of the season. One of those coupons bore the return address 10 Downing Street and the signature “D. Lloyd George”; no doubt familiar with many forms of pretense in political life and elsewhere, he voted for Patience.

As long as we have charlatans, fakes, poseurs, and phonies with us, the satire of Patience will ring fresh and true. It has done so for more than a century, and there are no signs of its demise.

© Steven Ledbetter (www.stevenledbetter.com) This is an expanded version of an essay written for the New York City Opera’s production of Patience in the late 1990s