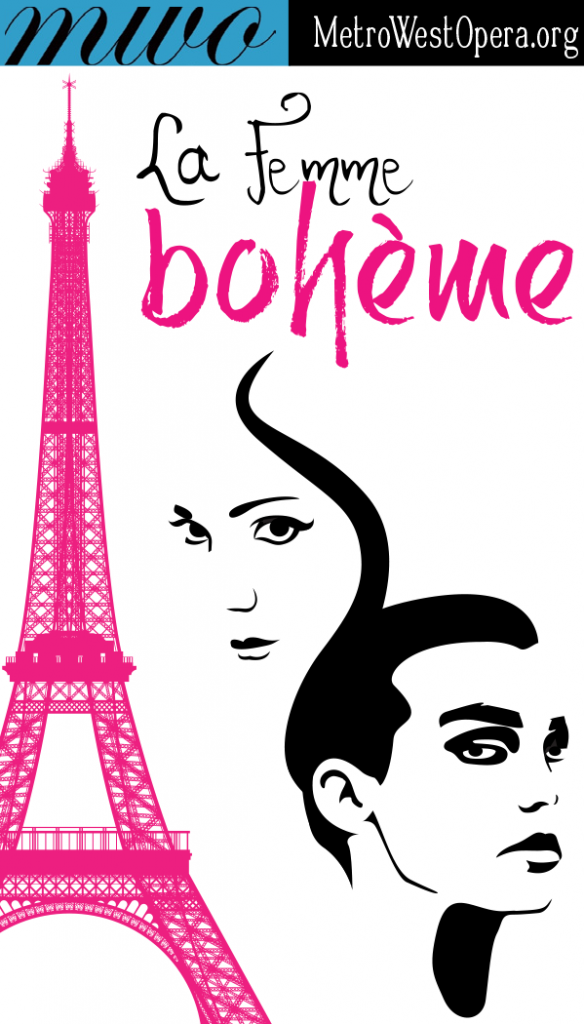 Ah, the timeless and beloved tale of young love. Casting it with all women turns out to be not mere novelty but emphasizes its universality. Featuring strong musicianship all around, and compelling stagecraft as well, Metrowest’s production at Watertown’s Mosesian Center for the Arts (through Sunday) is definitely an opera for everyone to see.

Well, of course an all-female La Bohème. Not only because women can love women, but also because the warmth and familiarity of the banter and camaraderie of the four friends (Rudolfo, Marcello, Colline, Schaunard) are so natural and delightfully relaxed in this production—yes, women as just pals.

While the singers sing the traditional libretto (as far as I could tell), the translation has been adapted and localized, and some English dialogue added. The concept of “La Femme Bohème” was borrowed from a successful production in Austin Texas (LOLA: Local Artists, Local Opera), and in an era of gender fluidity it’s an idea whose time has come.

The production is double-cast. In the Thursday night opening, Celeste Godin was a completely brilliant Rudolfo, a vocal powerhouse and dramatically charismatic. The demure and sometimes coy Mimi, Kelley Hollis, was vocally supple and alluring. Lindsay Conrad (Marcello), Carrie Reid-Knox (Colline), and Jessica Trainor (Schaunard) completed Mimi and Rudolfo’s circle with personable ease and inspired singing all around. Here, Mimi and Rudolfo are both sopranos, and the melding of their voices often takes place in unison rather than the original’s octaves. Their palpable attraction for each other added to the lushly sensual effect of their duets.

The Mosesian Center’s Black Box Theater offers a wonderful intimacy (I believe the capacity is 90). Perhaps a somewhat bigger venue would accommodate a larger audience without losing that intimacy. After all, Act II risks verging on the chaotic with all the stage action taking place at Momus, here a “popup street festival.” The large chorus (Occupy Wall Street protestors, steeped with sentiments from the January Women’s March as well), who had been onstage, uh, occupying in Act I, move into action to effect the scene change for Act II, while singing. Maestro Ng Tian Hui kept this complex scene running smoothly, or perhaps it’s a tribute to the finesse and savvy of the ensemble that I was convinced that the commotion was intentional and not an accident. And then the energy of the crowd turns to focus on the magnetic Musetta (Kristina Bachrach), who was every bit the showstopper she is meant to be.

Given my enthusiasm, complaints sound curmudgeonly. I was annoyed by how tiny the projected supertitles are, or by my inability to read them. Of course, a handful of instruments can in no way make up for the expansive palette of Puccini’s orchestra, but it is better than piano alone. One might have wanted a bigger and better piano (had there been any place to put it). Lizzie Jones (violin), Thomas Rodman (cello), Yhasmin Valenzuela (clarinet), and Yukio Oba (piano) made up the doughty, amazing, seemingly tireless ensemble, led by Hui with energy and clarity.

The instrumentalists had every kind of demand made on them: sometimes partnering the singers in sensitive duets, other times casting a spacious backdrop for the busy vocal ensemble or the ginormous chorus. The choral singing was excellent, and in the hushed and atmospheric opening of Act III, the range and interaction of vocal sonorities made up for limited instrumental timbres.

Last night’s production was very nearly at capacity, but there reportedly are seats left, particularly closing night Sunday and both weekend matinees.