On Sunday, April 30th, Somerville Museum presented the last of this season’s “Early Music Afternoons with Duo Maresienne, including offerings of newly found and published pieces from the 17th and 18th centuries. In its 28th season, the duo continues to specialize in music written for lute, theorbo, viola da gamba, and early guitars.

Solo 9 in E Minor is one of the 12 Telemann Fantaisies pour la basse de violle recently discovered in a German palace near Hannover and published within the two year. Carol Lewis played its four contrasting, virtuosic movements on viola da gamba with exceptional dexterity, while Olav Chris Henriksen interwove the baroque lute’s basso continuo. Next, Henriksen performed the contemplative, labyrinthine Fantasie in A Minor by Silvius Leopold Weiss. Published perhaps for the first time in 2010, the piece comes from a facsimile manuscript of lute tablature from the Rohrau castle in Austria. He then played a dreamlike Presto by Weiss. Lewis responded with Telemann’s elaborate three-movement Fantasie 7 in G Minor for viola da gamba. Henriksen continued with Ernst Gottlieb Baron’s Fantasie in C Major on baroque lute. Gottlieb Baron’s buoyant three-movement Concerto in C Major closed the first half, gaily combining viola da gamba and baroque lute and leaving us in uplifted spirits.

Telemann’s three-movement Fantasie 11 in D Minor displayed Lewis’s interpretive brilliance, each stirring movement enacted with solemnity and consummate musicianship. Next, Carl Friedrich Abel’s three-movement Sonata in F Major for viola da gamba and basso continuo—in this case, baroque lute—carried the audience into a languid, sonorous landscape that made one reflect on the vast expanses of time travelled by each musical phrase. Twenty-eight of Abel’s virtuosic sonatas, including the Sonata in F Major, came to light just a few years ago in Poland and have been published within the past year. Observing the closed eyes and rapt attention of the listeners, one could not help but wonder, who were the last people to actually hear this newly awoken, but living, vibrant music? 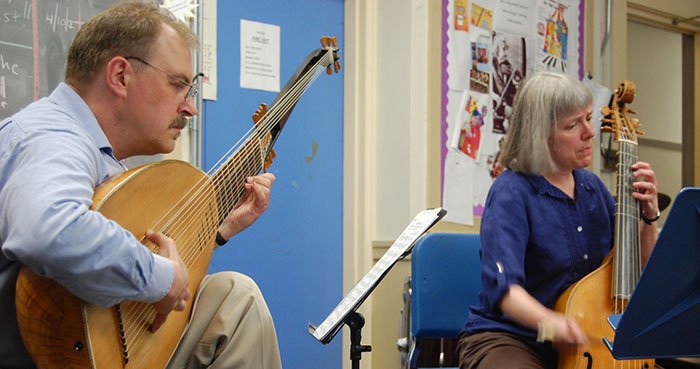 On Sunday, May 14th in Newton, the duo will collaborate with Capella Clausura and the Ken Pierce Baroque Dance Company in French music for choir, viola da gamba, theorbo, baroque guitar, and baroque dance.

Comments Off on Duo Maresienne Reveals and Transports