Skylark’s “Clear Voices in the Dark” intriguingly interspersed songs from the American Civil War and less well-known war songs from the Duke Archive with Francis Poulenc’s rarely performed and monumentally difficult Figure Humaine (1943) on Monday at Wellesley College’s Houghton Chapel; the acoustics were perfect for this ensemble. Founder Matthew Guard formulated this program in 2015, when he was struck by that year’s anniversaries: the ends of World War II (70th) and the Civil War’s end (150th ). He imagined an unconventional concert in which movements of the Poulenc are surrounded by arrangements of Civil War songs. “Not only do the songs’ straightforward harmonic language provide a foil for the Poulenc’s knottiness, but the whole program gives gravity to the extent of the suffering people went through then,” he said.

Poulenc based his highly regarded cantata Figure humaine for double mixed a cappella choir, on resistance poems of Paul Éluard. Singer Pierre Bernac, who worked closely with Poulenc in several early performances and knew the Eluard/Poulenc songs intimately, wrote in The Interpretation of French Art Song that “Poulenc succeeds in clarifying the poems by his music, divining their correct movement, their punctuation, their breaths, their inflections; he catches their feeling, their emotion, often revealing their deepest and most hidden meaning, and giving them life.” Eluard himself stated it even more succinctly, in an ode to Poulenc penned in 1944: “Francis je ne m’écoutais pas / Francis je te dois de m’entendre” (“Francis, I didn’t listen to myself / Francis, you made me hear myself”). The same could be said of Skylark’s awe-inspiring, spot-on performance which gave these songs renewed meaning and life.

If you know and love Poulenc’s songs and his Gloria, you could hear many glimmers of familiar harmonies. But the complexity of the antiphonal writing, the intimacy of the voices and the grandeur of the cumulative effect of these poems set perfectly to music leaves one breathless, especially in the last song/poem, “Liberté” with its rallying howl of “Liberté” marked ffff.

The texts of Figure Humane were smuggled to Poulenc under pseudonyms. Éluard was hiding underground, trying to avoid imprisonment for his support of the French resistance. The musical score similarly had to be smuggled out of Nazi-occupied France for its first performance, in London on March 25, 1945. Poulenc’s profound understanding of the voice and its expressive possibilities, as well as his extraordinary affinity with poetry, is displayed throughout the 19-minute work. He modestly told the critic Clarendon, “I received from heaven the gift of knowing how to write for a chorus.” To another friend, he admitted that he felt his choral music presented a more accurate version of himself than his instrumental works. “When my sacred and secular choral works are better known, the public will have a more exact image of my personality and they will see that I am not just the frivolous author of such works as Les Biches and Movements perpétuals.” It certainly was an eye (ear) opener for me. I was held absolutely spellbound by Skylark’s performance of this piece. Wow.

What I hadn’t expected to be nearly as affecting and impressive were the 8 American Civil War songs, five beautifully harmonized and arranged by Guard. The songs included “When this Cruel War is over- Weeping Sad and Lonely,” “Johnny has gone for a Soldier,” “Break it Gently to my Mother” and “Johnny I Hardly Knew Ye,” a phrase heard often after the Kennedy assassination. In fact, the program book explains,

This was published in London in 1867, a re-purposing of the American Civil War song, ‘When Johnny Comes Marching Home’ (1863). While the original American version was decidedly pro-war, this version from just a few years later takes a definite anti-war stance, transporting the melody and the central story line to Ireland. This evening we perform an arrangement by Alice Parker that was first recorded by the Robert Shaw Chorale in 1969 during another time of anti-war sentiment.

Among the many excellent soloists were Samuel Kreidenweis in “Battle Hymn of the Republic” and alto Clare McNamara in a moving arrangement of “Abide with Me.” A discovery for, I imagine, all of the audience was the peaceful “Working for the Dawn of Peace.” And who would imagine that “The Battle Hymn of the Republic” would leave a hardened critic near tears? Besides extraordinarily good singing, Skylark must be commended for its gorgeous program book (on beautiful paper) full of thoughtfully written notes and photographs that elucidate the history or texts of each song or cantata movement. I only wish I had had the time to hear the concert twice. This world-class group not is to be missed. 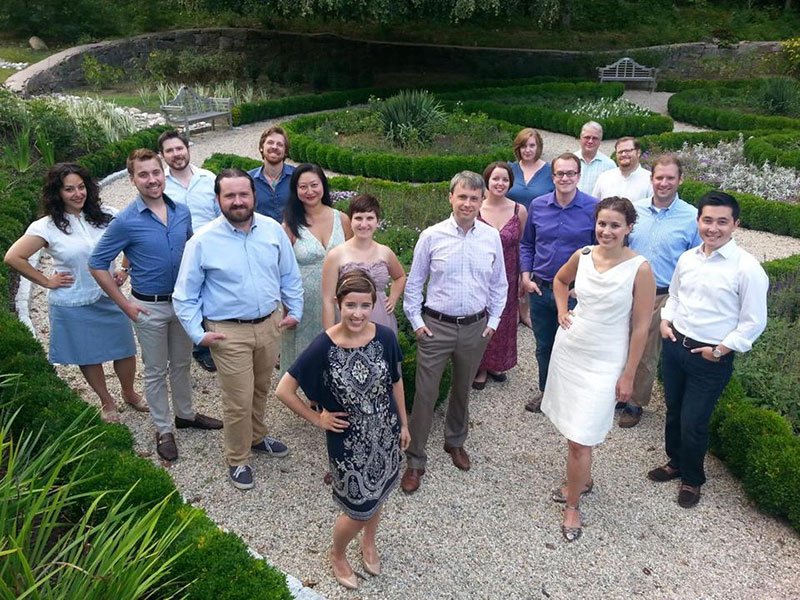 As one can tell from their impressive 2016 CD, “Crossing Over,” which created an imaginary picture of the final moments of life, Skylark’s founder (with his wife Carolyn Guard) Matthew Guard has a real gift for imaginative thematic programming. His virtuosic ensemble of 16 comes from Atlanta, where he lives, and Boston, where he went to college. His singers have, he has said in interviews, such a level of technical proficiency that they can offer five to six programs a year with minimal preparation, usually just in a few days. The Guards have an unusual back story:

After graduating from Harvard and getting their MBAs, Skylark’s founders were both working for management consulting firms when they joined the choir at St. Philip’s Episcopal Cathedral in Atlanta. Carolyn left her job to co-found multi-million dollar children’s sunglasses company Babiators, meanwhile Matthew convinced his employer to let him work part time on a 3-months on, 2-months off basis. During his time off, Matthew put together Skylark, expanding from a debut concert interrupted by Hurricane Irene, to 15 performances per season, with a core roster holding a combined 46 degrees in music. Besides recording, members of Skylark have performed at Carnegie Hall, Lincoln Center, Boston Symphony Hall, and Atlanta’s Symphony Hall.