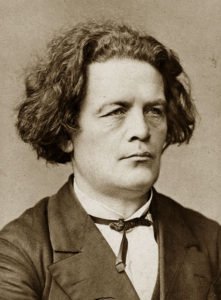 Three weeks from now Commonwealth Lyric Theater mounts, they tell us, the nearly 150-year-late Boston premiere of The Demon, the 1871 Russian operatic masterpiece telling of the immortal Demon falling in love with a mortal beauty in the mountains of Georgia. The Demon will tread the Cutler Majestic Theater boards on May 18th and 20th.

Artistic Director Alexander Prokhorov brings to the stage Anton Rubinstein’s romantic drama, based on a famous poem by Mikhail Lermontov, which portrays a protagonist dwelling in isolation and weary with the weight of immortality. Wandering the earth, he encounters the princess Tamara, who overwhelms him with emotion. In his greedy passion, the Demon destroys Tamara’s fiancé and claims her for himself. Tamara returns compassion toward the Demon and his tortured spirit, and they embrace—but his kiss is fatal.

The fully staged and costumed production, with orchestra under Lidiya Yankovskaya, will feature great Russian-born soloists (Alexey Bogdanov and Zhanna Alkhazova), folkdance ensemble from Georgia (PESVEBI), spectacular design including visual elements by artists from Moscow and Vienna, authentic Georgian Dance Ensemble with their notorious sword dancing, an international cast of other soloists, and choruses of adults and children.

BMInt interrogated a couple of the CLT principals as follows:

FLE: At the end of the 19th century, the leonine, Beethovenesque Anton Rubinstein was as popular as Brahms in much of the musical world. The BSO, for instance, performed his Fourth Piano Concerto nearly 40 times before dropping it from rep in 1930. He wrote some very popular songs, piano works, symphonies, tone poems and chamber music. He made a major performing tour of America. He and his brother both started major conservatories and mentored major composers. Why did he fall so fast?

Lidiya Yankovskaya: In Russia Rubinstein never fell. As for his music’s not catching on in the US, there are many theories. My thought is that Rubinstein’s style had neither the exoticism of some of the mighty handful, nor the purely Western style of Tchaikovsky, making him less appealing to Western audiences of that time. Plus he split his career in many ways—as performer, conductor, pedagogue, and he even managed to found and then run a conservatory. Driving an international compositional career takes a great deal of time, and he focused on other areas.

Have you ever played or conducted anything by him?

I’ve played some of his piano works and have worked with singers on the Demon’s aria. I have been wanting to conduct this opera for some time, but it’s very difficult to get a hold of usable scores and parts. After several years of searching and planning, we have finally been able to obtain materials from Russia and are also working with composer Moshe Shulman on a new reduction of the score.

Rubinstein’s Demon is an extreme rarity these days outside of Russia, where it has never long been off the boards. Is there something about it that is dear to the Russian heart and does not translate well? I mean figuratively.

The Cold War kept the majority of Russian operatic repertoire (which is vast and incredibly rich) off American stages. It’s really only in the last 15 years or so that American stages are starting to see a wider range of Russian operas. I hope that in the near future we will start to see the many other phenomenal Russian works that are standards in Russia but never performed here.

Furthermore, I think the plot of the opera poses a challenge. The story does not have a happy ending for anyone involved; the main character (the Demon) never really redeems himself, even when he has a chance. Russians are used to living with hardship and popular Russian stories often don’t have happy endings. Popular plots in American culture, even if they end tragically, tend to have some element of bittersweetness to them; the American film industry has even changed plots of many well-known tales (The Little Mermaid is a classic example) to fit this mold.

Is it considered unlucky to produce, like “the Scottish play” of Shakespeare? It seems to intimidate one of the Commonwealth Lyric Theater board members.

No, not at all. It’s a very commonly performed work. I think there will always be some individuals who are uncomfortable with any romanticized representation of the devil. The work is Milton-like in its approach, but there are those who feel uncomfortable with Paradise Lost, despite its inherent religiosity.

The Demon is grand opera, with six scenes and an epilogue, eight principals, a famous ballet and something like seven choruses. Is Commonwealth Lyric Theater ready to make a jump from churches and synagogues to a major theater with all the attendant expectations?

Although it’s true that the choral singing is very extensive (perhaps another reason that the opera is not performed more often?), I would not call it grand opera. The full work is not particularly long and almost all the action hinges on just two characters. We will have a (relatively small) chorus and a ballet, and a full complement of principal artists, as we have in past CLT productions. However, as usual, we are performing a reduced version for a small chamber orchestra, with several large cuts (mostly in the chorus material). The Majestic Theater, which itself is quite intimate for an opera venue, will allow our superb soloists to shine in the kind of acoustic they deserve and for the opera to be presented with the grandeur that it requires.

Tell us about the singers, dancers and choristers.

Once again, we have some spectacular soloists joining us. I’m especially looking forward to working with the fantastic baritone Aleksey Bogdanov in the title role, and to welcoming back Boston native Zhanna Alkhazova, who wowed our audiences with her performance of the title role in Iolanta a few years back. Pesvebi Georgian Dance Ensemble will come from NYC to join our chorus and orchestra. A good recording of some of the ballet music is HERE.

Will this be a family and community affair for the company? To what extent will the players have had experience in this work?

CLT hinges on the support of Boston’s Russian community and the many adopted members who have joined the company along the way. The Russian community is fortunate to boast many very high-level artists, some of whom are Boston-based and others are coming from abroad or otherwise taking a break from their busy careers to bring this rarely heard operatic gem to an American stage.

It is first huge step for our company coming from small performances spaces on the outskirts of Boston for the past seven years. As you know, we are local opera company with a dream of bringing to life little-known and -performed gems of Russian and Slavic repertoire and sharing them with Boston audiences. Under the art direction of Russian-born bass-baritone Alexander Prokhorov, we have already won the National Opera Association’s Best Production award in the professional category for two consecutive years, with Rachmaninoff’s Aleko and Rimsky-Korsakov’s Mozart and Salieri.

Last May we staged the full production of Mussorgsky’s Boris Godunov, which was embraced by WBUR as one of the events that “struck a chord on the classical scene in Boston this year”. In another positive review, the Boston Globe stated that “this production delivered the jolt of real Russian opera steeped in an authentic tradition” and called us a “local opera company that tends to dream big and to exceed expectations.” This spring we are truly dreaming big, and we invite all Bostonians to dream big with us.

And  back to Lidiya, will this be different for you from conducting a Juventas concert with jugglers and aerialists?

LY: Yes and no. The nature of the project is certainly very different, and there are many more elements in play that are outside my control—I’m here in the role of a conductor, not an artistic director who oversees the overall vision of the project (as is the case with Juventas). However, ultimately, my job is the same. I will be working with a group of people to foster their ability to perform their best and to bring our musicmaking to the highest level possible. Mainly, I feel very fortunate to have an opportunity to do such different projects within the span of just a few months. It’s wonderful to have a spring that includes new music, a Romantic Russian opera, several symphonic concerts, and work with one of the world’s top choruses. With each, the musicmaking is inspiring in a different way, but ultimately all rely on the same skills and all complement one another beautifully. I am very much looking forward to joining my colleagues at CLT in bringing this most deserving and most neglected opera to Boston!

Sung in Russian with English supertitles

The great local benefactor behind the venue name died a few weeks ago, and this seems as good a place as any for appending an appreciation of  Ted Cutler’s long and worthy life. [obituary here]