After but two years of teaching theory at Carnegie Mellon, Joseph Summer retired, in 1981, to devote himself fulltime to composing and, we might add, self-presenting in annual concerts the results of his musical responses to the Bard of Avon. His latest, at Jordan Hall Saturday night, drew its inspiration and organizing principle from a beloved vocal work of Brahms, whose Four Songs swim in the sumptuous pool of a women’s chorus accompanied by two French horns and harp. If only one of the songs had a Shakespeare connection, that was enough to warrant its pride of placement in this “Summer Distillation.” Summer wrapped a program of mostly his own works around the Brahms.

Then were not summer’s distillation left,
A liquid prisoner pent in walls of glass…

The composer relates that when he was a student at Oberlin in the early ’70s, a coed asked him to sit in on a rehearsal of Opus 17. “The opening solo horn appealed to me [a hornist], but when the women’s voices entered I began to cry, and then weep. I could barely restrain myself from sobbing. I sat transfixed, a liquid prisoner of the awesome beauty of the Brahms.” Many of us react that way to this composer; whenever Brahms writes for voice or horn, something very satisfying happens. How many readers realize that more than half of Brahms’s oeuvre includes singing? We all know the German Requiem, maybe the Alto Rhapsody, but how many have heard Nänie or Schicksalslied or the unjustly underperformed Magalone cycle?

Despite the surpassingly lofty opening solo from hornist Josh Michal, this Brahms traversal did not quite engender the Sehnsucht described above, probably because the chorus was a mere quartet—albeit a good one, with individualistic voices blending to perfection. But even in a performance that was merely fine, Brahms’s gift to us blazed on this night as the summer solstice.

Credit is due as well to Kevin Owen on horn two. With his part unfolded six feet wide across three music stands, he duetted uproariously with a mock harridan Thea Lobo in Summer’s “O God, That I Were a Man”, an uproarious scene that recalled Ernst Lubitsch’s mayhem on the proposition in “I Don’t Want To Be a Man”.

Each of the 11 other short pieces (including four world premieres) utilized either a subset or an expansion on the Brahms forces. The gifted sopranos Jessica Lennick and Jennifer Sgroe, mezzos Thea Lobo and Sophie Michaux; hornists Owen and Michal, and the effective, hardworking harpist Franziska Huhn (onstage all night long) followed the clear beat and shapely direction of Tim Ribchester with great expectations and an involvement fully formed.

Perhaps because of the instrumentation, Summer’s sound world on this night, in the treatment of the playwright’s texts, carried to these ears whiffs of Britten’s Serenade for Tenor Horn and Strings as well an angular revision of Vaughan William’s Serenade to Music.

After last year’s Summer Shakespeare, BMInt’s Virginia Newes described the composer’s clearly tonal language and unabashedly lyrical style. I would add that while it’s certainly not the opposite of lyrical, it is not melodic. Responsive to text and various in effect it is without any doubt.

At one extreme, Sonnet CXXXIII brought its own particular torture as attitudinally voiced tenor Neal Ferreira intoned “It is not enough to torture me” perhaps 50 times in the company of the energetic harp thrummings. We got the point. In setting the more romantic Sonnet CIV, Summer gave the Gallic minx Michaux some repose to sell “To me, fair friends, you can never be old”—to great effect.

Summer doesn’t convey the meter of the poetry quite as well as the prosodic declamations. Shakespearean sonnets want to be read aloud with plummy accents and knowing gazes and attention to the words’ often occult slyness. The music did close to nothing to improve upon them. “Was ist Sylvia?” in Schubert’s immortal setting should give pause to any composer who wishes to go there. Not Summer, whose take smoothed out the strophistry. We got the words clearly, in buttermilk tones from Lobo, but the harp part supplied the greater interest. And why did the setting peter out? After all, Sylvia is excelling … to her let us garlands bring.

“If By Your Art” should have channeled Tempestuousness more, although we much appreciated soprano Lennick’s clean focus and fond care. There were perhaps too much sensuality and not enough mad scene, though from a lesser artist the harp’s frequent pedal changes would have evoked crazed outbursts.

Soprano Jennifer Sgroe’s star turn came in Schumann’s Three Songs based on Körner’s settings of Byron’s Hebrew Melodies. Even though accompaniment in arpeggios and rolled chords is specified in the urtext for harp or piano, it felt effortful in Huhn’s hands. Sgroe managed with patrician ease and polished vocal refinement to place us in the German Romantic world of death and pain and heroism.

We are cheered to report on the contribution of sometime BMInt contributor and composer about town Benjamin Pesetsky. His Questions and Answers from All’s Well that Ends Well (I i) opens in something of a unison plainsong, “Our remedies oft in ourselves do lie.” His adoption of the sonorities of trio of women plus two horns and harp was expertly exploited throughout. In setting the text, Pesetsky at times adopted Shakespearean patterns and at other times ignored them. Overall his pulse accorded with the Bard’s, and he applied his personal brand of lyrical impulse with generosity. 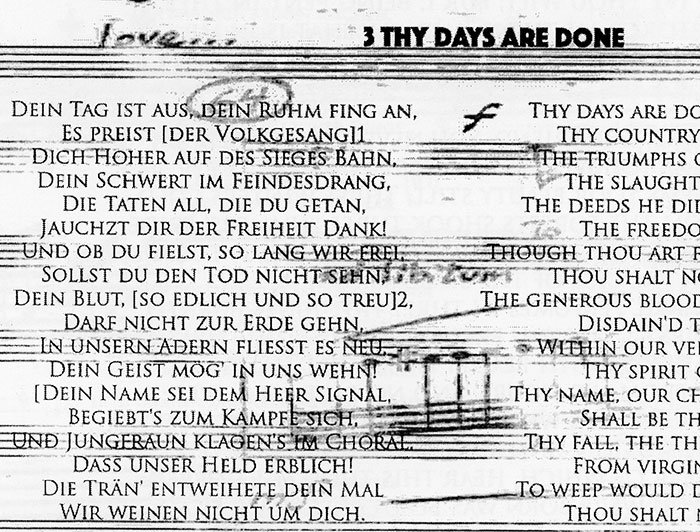 Finally, it must needs be asserted that in providing discernible texts, the stylishly unreadable Dadesque booklet design by Tyler Coste frustrated our attempts at comprehension. Its several-sized fonts disgorged in all caps, tightly condensed and with practically zero leading. The variously expanded or compressed score images filled spaces without regard to the shapes of notes or staff. A visual nightmare was handed to patrons.

And as our colleague Vance Koven once said, “The negligible crowd put out as much noise in approval as it could.”