Concluding a successful two-week tour of the United States this Friday in Jordan Hall, Berlin’s dynamic Akademie für Alte Musik (also known as Akamus) treated a Boston Early Music Festival full house to “Of Frogs and Men,” an instrumental program of German and Italian Baroque.  The unprecedented international success of this chamber ensemble began with its 1982 East German origins, rooted in the lively Leipzig and East Berlin Tafelmusik scenes. Modeled after London’s Academy for Ancient Music, the group now performs over 150 times per year and has flourished after reunification with musicians and venues in the West (a new subscription series based in Munich’s Prinzregententheater was founded in 2012). American partners this season include countertenor Bejun Mehta (touring with concerts in Spain and Poland). Often called “one of Europe’s greatest musical success stories,” Akamus has presented subscription seasons in Berlin’s Konzerthaus for over 30 years, and it now partners regularly with René Jacobs and the RAIS Kammerchor in Europe, specializing in music of the Baroque on original instruments.

A magnificent chameleon of an orchestra, with rotating concertmasters leading contrasting programs. Its upper strings (including cello), and winds perform standing, and this enhances contrasts of both orchestral color and complex rhythms. Current standout include soprano recorder player Anna Fusek, who delighted the audience with her witty interpretation of Vivaldi’s Il Gardellino (The Goldfinch) concerto (op 10, no. 3) and founding concertmaster Bernhard Forck, who spoke before the concert on tunings (preferring 415Hz) and instruments both original and copied. Forck made his US debut as a baroque violinist in Boston “right after the Fall of the Berlin Wall in 1990.” He remembers, “Concerts with historical instruments were more of a rarity at that time, so there was a very committed and enthusiastic audience at Jordan Hall.”

Two Boston instruments made an appearance: a double bass and a single-manual brass-strung harpsichord after Carlo Grimaldi (Messina, Sicily, 1697) provided by Zuckerman complemented the ensemble of six violins, two violas, cello, lute, and winds (two oboes, bassoon, and treble recorder, all of whom were featured as soloists).

Friday’s concert, was an official “highlight” of AKAMUS’s fifth American tour, which began with three dates in California (Berkeley, Sonoma State University [reviewed here] and San Diego). Green Recital Hall in Sonoma is a close copy of Tanglewood’s Ozawa Hall: click here for their encore at that concert. James Oestreich listed the ensemble’s Carnegie appearance as one of the week’s top eight classical events, describing Akamus’ playing as a “Hoedown Academy” that “had even ultrarefined listeners clapping and hooting along.”

The 15-piece chamber ensemble has already returned to Europe for a busy Lenten season of Bach, with a mini-tour of Spain and Italy (Bach Messe in h-Moll) followed by a touring production of Bach’s St. Matthew Passion, led by René Jacobs and sung by the RAIS Kammerchor (Frankfurt, Barcelona, Gdansk, Paris, and Budapest). Regarding the ensemble’s approach to Bach, Concertmaster Forck commented, “As in our recording, our performances of the St. Matthew Passion will focus on the double chorus. We attempt to approach the sound that the audience might have heard in the Thomaskirche in Bach’s time. For example, Choir I and Orchestra I are much larger than Chorus II and Orchestra II, which were placed on the very small side gallery in those days. All the soloists—with the exception of the Evangelist—take part in the choir.” 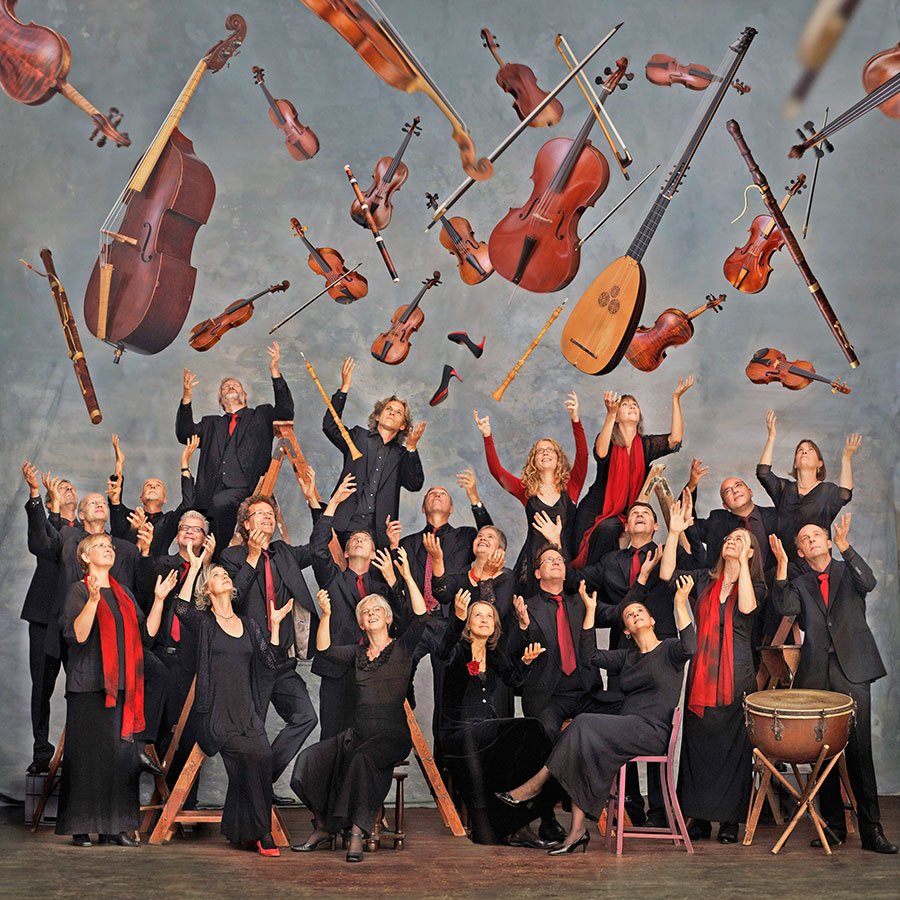 The first half featured northern European compositions, with an emphasis on Baroque Dresden. For comic works by Carlo Farina and Georg Philipp Telemann, the strings preferred a highly charged, earthy sound, but in the opening Grave of Jan Dismas Zelenka’s moody Hipocondrie à 7 concertanti in A major, ZWV 187,  the players achieved a smooth, homogenous shimmer. Lead oboist Xenia Löffler remarked before the concert, “Zelenka is one of my favorite composers, but I wish we had more large-scale instrumental works from him. A Bohemian composer, he moved to Dresden in the early 18th century.” In Zelenka’s Hipocondrie, “major and minor modes [moved] constantly in flux;” the opening Grave was dominated by the hushed, velvety, tones of Löffler and fellow oboist Michael Bosch, playing sweet melodies and cascading, supple fragments free of excess vibrato. Though most of the work bubbled along in a happy A major, Akamus, in emphasizing the subtly chromatic shifts, destabilized the harmony in ways that both pleased and unsettled.

Telemann’s hilarious Violin Concerto in A Major, TWV 51:A4 celebrated the upcoming 250th anniversary of his death, recalling the voices of frogs as soloists and choral singers. The works subtitle “Les Rainettes,” (the frogs) requires diverse violin effects to bring out the disquiet of a swamp with the voices of the amphibians brought into Jordan Hall through slides, scoops, “wrong” notes, and dissonant clusters.

Marcello’s brilliant little Concerto No. 5 in B-flat major from his La Cetra (1738) was followed by vibrant Vivaldi concerti for recorder (op. 10, no. 3, RV 428) and oboe-bassoon duet (RV 545) and Geminiani’s extensive rewrite of Corelli’s Violin Sonata Op. 5, No. 12 explored variation over the “La Folia” bass pattern. Many listeners were astounded at the variety of approaches to articulation, timbre, and expression that Anna Fusek elicited from the sweet-voiced treble recorder. The evening’s Italian section highlighted Akamus’ exquisite ensemble approach to transitional moments from well-controlled ritardandi to sudden shifts of color, register, and character. The first encore featured oboe duet (a final movement of Vivaldi’s double concerto), while the second dispensed the audience favorite, Wharton’s Hoedown, created by Geoffrey Wharton for the 1983 Festival des Arcs.

Comments Off on Akademie Not the Least Academic