Rebecca Saunders, a 60-year-old Englishwoman composed Fletch, a 14-minute string quartet, which, she noted, “is a furious ongoing exploration of a specific physical gesture and fragment of sound. In its purest form, this elemental sonic gesture is a flowing up-bow sul ponticello double-harmonic trill, often with a fast glissando, crescendo-ing rapidly out of nothing to fortissimo.”  All four instruments battled each other with these gestures repeatedly for about ten minutes over a wide range, with occasional pianissimo breathing points, and many trills and long sustained notes; there were plenty of open D string and various unison Ds, but the fortissimos often bent the pitches in various directions. The cello had tuned its C string way way down, maybe as low as F or E; I couldn’t be certain, but it added a fine rumble to the overall low-register sound. The last four minutes seemed like a “slow movement,” quieter and much more sustained, with pianissimo long tones that coalesced into recognizable collections of distinct pitches. “The essential materiality of sound is for me of primary importance,” the composer added, “…being aware of the grit and noise of an instrument…and exploring the physical gesture which creates a fragment of sound.” That is accurate.

“Furious” was an adroit watchword in this angry and distinctly unlovely exercise. It wasn’t without interest, nor did it feel insulting—the music wasn’t impersonal enough for that—but it distinctly felt assaultive.  A small da capo which I might have detected in those physical gestures constituted the only discernible structure. The exaggerated instrumental technique itself was not off-putting — there weren’t any avant-garde devices in this work, and even Schoenberg was not afraid to demand double-stops in harmonics simultaneously sul ponticello and col legno in his Fourth Quartet. Other examples may be as harsh in sound and furioso as this one — Elliott Carter’s First Quartet, for instance, or the brilliant, dramatic (and unfortunately almost completely forgotten) quartet by Billy Jim Layton [performed HERE], or even the very popular and very crunchy Fourth Quartet by Bartók come to mind. But in Fletch one finds, as in so many new works, gestures meant to call attention to gesture for its own sake, as if the composer were shouting from the outset: “Look, I can do it too, and louder, faster, and meaner, and ipso facto better.” Was that point worth making?

Whatever the point, the four players — Daniel Chong and Ying Xue, violins, Jessica Bodner, viola, and Kee-Hyun Kim, cello — attacked it with utmost energy and concentration, and one could even say heroism. Their sffz accents made them flail about with such energy that I worried whether they might fall off their chairs. Might this aggressiveness had a distinct effect on the rest of the program? Read on.

Schubert’s Octet in F Major, D 803 of 1824, surely one of the most lovable chamber works of all time, provides six movements of pure lyricism and joy, written while the 27-year-old composer was at the height of his powers; the Great C Major Symphony was only a year away. The printed notes mentioned the Octet’s origin as a companion to Beethoven’s youthful Septet, Op. 20, very popular in its day but less often heard now because it is rightly considered inferior to so much of his output. Schubert’s Octet dwarfs Beethoven’s Septet in every respect, but especially in its gratifying superabundance of melody. As pure instrumental sound, it never fails, and every note tells. (The fourth movement, in variation form, takes its theme from a duet in Schubert’s singspiel Die Freunde von Salamanca, D 326 from nine years earlier. And do we all agree that the sextuplet 16ths in the Adagio second movement, in B-flat major, are reborn in “Ellens Gesang III” [the so-called “Ave Maria”], D 839, a year later?) I still find new revelations of subtle harmonic structure every time I hear the work; the shifts to flat-submediant harmony that appear in different movements, or instance. Those who find Schubert’s Octet too long — a good hour in generally — can take comfortable refuge in dreams, or remain fully awake and alert as needed. (Paradoxically, I think exactly the same about another completely different Octet, the one for winds by Stravinsky, that certainly rates as one of his most lovable works.) 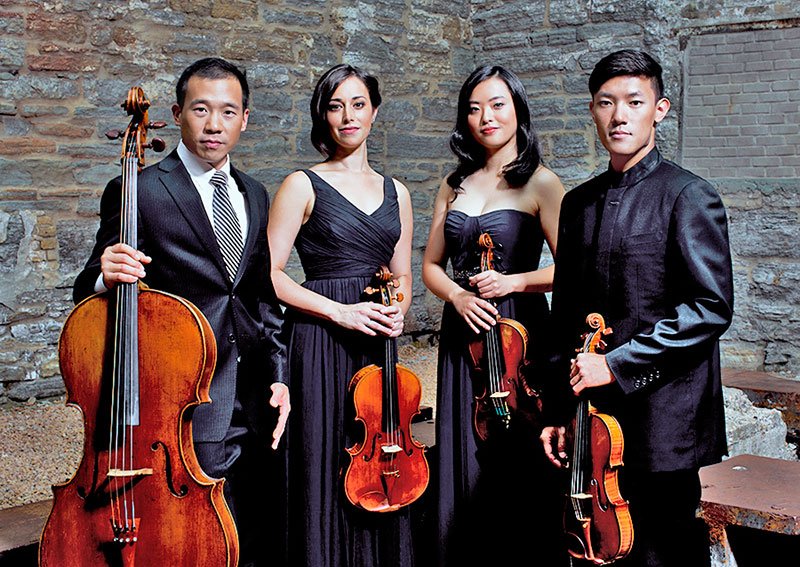 The players on the Paine Hall stage sat in an open semicircle, which among other things situated the first violin and the clarinet, the simultaneous leaders in this ensemble, who often double the melody, as far apart as possible. A more compact arrangement would have enabled all the players to hear each other more closely, and might have prevented the occasional collisions and disturbances of togetherness. Disagreements about what kind of staccato should be used in repeated notes in dotted rhythm also damaged unanimity of ensemble. The quartet’s aggressiveness that dominated the first part of the program carried over into the Schubert, and too often resulted in dynamic fluctuation in the melodic line — what Gunther Schuller used to call “in-your-face playing” — and in unevenness in the fast fingerwork of accompanying passages like the triplets in the finale.  It’s likely that some of the string infelicities can be attributed to insufficient rehearsal on the Paine stage. But the contributions of the other players, three of them students, sounded entirely mature and professional; I congratulate them too: Stefan Van Sant, clarinet; Steve Ekert, bassoon; Megan Shusta, horn; and James Hotchkiss, double bass — all excellent, and all imperturbable. Overall, this was a gratifying performance of some of the most imperturbable and genial music that exists.

Comments Off on Parker and Winds Play Paine