During the past week , the arts departments of Tufts and Brown Universities presented pianist Guy Livingston, Paul Lehrman and others in performances, lectures, and panels celebrating the centenary of the Dadaist movement and the modernist music of American maverick George Antheil (“Paris to Hollywood – Dada to Noir”).

George Antheil (1900-1959), a brash young American pianist and composer rose to fame in 1920s Paris. His 1945 autobiography Bad Boy of Music, reissued in 1981 by Da Capo Press offers and entertaining, provocative, and engaging account of the composer’s life, and lends its name to a notable recent documentary on his life and career. According to Aaron Copland, “George had Paris by the ear.” His first Paris concert, delivered as a curtain raiser for a 1923 performance of the Ballet Suedois, caused a general riot due to his obsessive, percussive rhythmic playing.

His “ultra-modern” solo recitals were major cultural events and his most notable large-scale work of the period was Ballet mécanique, inspired by the neo-primitive ballet music of Igor Stravinsky. The complete work was over twice as long as the film for which it was commissioned, alternating punishingly loud blocks of sound with occasional pauses of “time-space” which can stretch into twenty seconds of silence. Although Stravinsky was the first to consider combining multiple player pianos, cimbaloms, or harmoniums in an orchestral group (for an abandoned version of Les noces), Antheil’s two handwritten scores for Ballet Mécanique require them. He would go on to write over thirty film scores and become the film music reporter and critic for the journal Modern Music.

Tufts began the week with a well-attended two-day celebration of Antheil’s film music co-sponsored by the departments of Music, Film and Media Studies, the Media Arts division of the School of the Museum of Fine Arts (Boston), and the Program in Music Engineering at Tufts. Monday’s noon colloquium in Varis Lecture Hall featured Guy Livingston with guest pianists Alanna Rantala (an NEC grad based in San Francisco) and Shannon Sadler (St. Cloud University). The program began with the Dada Pseudomentary (2007). It included early Dadaist film shorts, live music, and a historical overview of the early Dadaist movement (born in Zurich, Switzerland in 1916) entitled “Drinks with the Dadaists.”

The audience enjoyed Return to Reason, a 1923 film directed by Man Ray. Since Antheil had played at the first screening of the film in Paris, Livingston re-set the film to his music. Rhythmus 21 (1921), often considered the first abstract film, paired Antheil’s music with images curated by Dadaists Hand Richter and Viking Eggeling. Kurt Schwitters’ own recording of his remarkable sound poetry turned performance art piece Ursonate (created 1922-1932) unspooled with the author wearing cardboard cut-out Dadaist costumes after designs by Sonia Delaunay. Antheil’s own unfinished experimental film Woman (1926) appeared for the very first time (a world premiere in Medford, MA!) to music from his Woman Sonata, W. 46 and La Femme 100 Têtes (premiered in 1933 in Saratoga Springs, NY and inspired by surrealist Max Ernst’s collage novel).

Livingston, who leads a dual career as an award-winning concert pianist and producer, is one of the foremost performers of Antheil’s music today. His highly-praised 2013 recording for Wergo of Antheil’s piano works ranges from rare juvenilia like Golden Bird, after Brancusi (1919) to excerpts from his opera Transatlantic (1928/1930) and his 2003 Antheil: The Lost Sonatas (Wergo, 6661) includes works from the composer’s later years in California.

Holding degrees from New England Conservatory, Yale, and the Royal Conservatory of the Netherlands, Livingston has produced and directed radio features on modern and contemporary music around the world. He played Antheil’s jaunty and complex Jazz Sonata (1922) with verve, and occupied the center place (of three performers) at the keyboard for the U.S. premiere of his own tumultuous, muscular transcription (for six hands) of Serpent mécanique for pianola (1921) [here].

His light touch and well-sculpted, nuanced phrasing brought out the boyish, capricious quality evident in Antheil’s choices of musical quotations (Stravinsky and Rimsky-Korsakov) and in his penchant for minimalist repetition. His witty remarks on new (and forgotten) American composers and of his expressive piano playing are featured in his entertaining Friday “American Highways” broadcasts for ConcertZender radio (available on iTunes and via web streaming) [here].

The most well known Dadaist film, Francis Picabia and René Clair’s 1924 Entr’acte [here], (a collage of Man Ray and Marcel Duchamp playing chess, a runaway hearse, and a camel), rounded out the program.

Monday evening’s event in Varis Hall (“Antheil in Paris and Hollywood”) featured scholarly papers by noted writer and cultural historian Mary E. Davis (author of the forthcoming Styling Le Sacre: The Rite’s Role in French Fashion) and SUNY-Buffalo PhD candidate Daniel Robinson (“a discussion of Antheil’s “dualistic roles in the world of Hollywood films,” illustrated with excerpts from The Plainsmen (directed by Cecil B. DeMille, 1936). 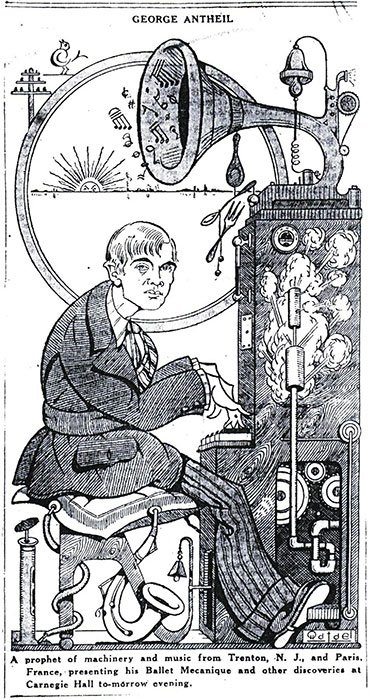 On Tuesday, March 7, Paul D. Lehrman, a noted Antheil expert who has contributed to many reconstructions of Antheil’s groundbreaking Ballet mécanique, led a lunchtime colloquium in Varis Lecture Hall. Speaking from the dual perspectives of both a historian and a technologist, Lehrman explored whether Antheil’s preference for four (automatic) pianola parts (being realized by up to four pianolas per part) was possible to achieve. “Although several such instruments could be started together and set to the same nominal tempo, mechanical inconsistencies in the rolls and the mechanisms would cause them to drift apart over time. Given the complex and precise rhythms in Antheil’s score, this would have been disastrous.”

He outlined the history of player pianos and described evolving solutions to this problem of synchronization. Antheil had worked closely with Pleyel on the pianola rolls for Ballet mécanique (four rolls which were eventually condensed into one).“In 1923, Pleyel led a patent for a system for synchronizing multiple mechanical devices such as pianolas and film projectors, using electric motors and a sophisticated speed-adjusting system.” Since they never built a working model, Antheil proposed an “all-electric system, in which the instruments operated from a ‘common control,’ using a ‘switchboard’ to direct which were playing which parts.” In other words, Antheil was describing a technology that didn’t yet exist, but is now realized by MIDI or industrial selsyn synch.

Lehrman has written extensively on the technology and the reconstructive work involved in recent revivals of Antheil’s masterpiece. His essay in the liner notes of Gil Rose’s excellent recording of the work with the Boston Modern Orchestra Project (2014) may be the most cogent discussion of the technical challenges (and possible solutions) for the work. “The tempos of the various performances have varied widely, mostly because Antheil’s score is not very clear—or practical—in that regard. His sole tempo marking is “pianola=85” [8.5 feet per minute]. By measuring the distances between notes on the original roles, one can calculate that this translates to a tempo of about 152 beats per minute. By slowing down the tempo in the most rhythmically difficult part of the piece, a 127-measure section towards the end, to 90-95 beats per minute, it possible to play the rest of the piece considerably faster.” [article here]

The Tufts Antheil-themed events culminated in an evening presentation in Distler Recital Hall that drew the largest audience of the festival. The PBS documentary Bad Boy Made Good began the program, and Lehrmann’s extensive remarks and notes included a recommendation to see the remarkable short film/performance of Ballet mécanique by an all-robotic orchestra designed by LEMUR [here] at the National Gallery of Art in Washington, DC. Boston Phoenix’s review is here.

This film traced the history and revival of Ballet mécanique from its original scoring for three xylophones, eight grand pianos, one (but really up to 16) pianola(s), two electric doorbells, two wooden and one metal airplane propellers, tam-tam, four bass drums, and siren, premiered in Paris in 1926 with reduced orchestration and keyboard-operated instruments performing the fiendishly difficult xylophone parts. Carnegie Hall witnessed an edited version of the work in 1927.

Recent revivals of the work with its original (intended) component of multiple automatic keyboards have included a landmark 1999 revival (the world premiere of the original orchestration) assisted by Dr. Lehrman at UMass-Lowell (Jeremy Fischer conducting the UMass-Lowell Percussion alongside sixteen Disklaviers in Durgin Hall). Professional live performances include those by the San Francisco Symphony and the Boston Modern Orchestra Project, and recent work has finally reunited a version of the original film with an edition of Antheil’s music. Recordings, links, and images from all of these performances are available at the Ballet mécanique webpage.

The final speaker, film historian, curator, and restoration expert Bruce Posner, discussed the long and complex history of the Léger/Murphy/Pound/Ray film from 1923-1924, illustrated by images from contrasting edits and detailed notes on many extant (but all different) versions of Ballet mécanique. Posner described unusual correspondences of order, form, and image in archival versions held by diverse international archives. He explained technical elements of the complex processes involved in saving the two Ballet mécaniques (the film and the score) from their separate inceptions and completions, to the newly completed 2K digital restoration. As an introduction to two versions of this film shown side-by-side, Posner remarked, “The completed 35mm film, as presented here in a newly restored 2K digital version, is combined with the original 1924 music score, edited and recorded by Paul D. Lehrman, and remixed in 5.1-channel surround sound by Gustavo Matamoros.”

The evening concluded with the U.S. premiere of the 2012 “piano concerto” version of Antheil’s Ballet Mécanique, featuring acousmonium (eight loudspeakers arranged in an arc at the front of the auditorium) and piano soloist Guy Livingston paired with the 1924 film. Earplugs were handed out (and recommended) to the audience, but most sat back and enjoyed the mind-clearing intensity of the presentation, so full of the sounds of early modern America in the throes of the Industrial Age.

THURSDAY
Livingston repeated his performance of the “piano concerto” version of Ballet mécanique in Grant Recital Hall at Brown University’s Orwig Music Building on Thursday, March 9. The PBS documentary Bad Boy Made Good and a short film featuring a performance of the Ballet mécanique by an all-robotic orchestra designed by LEMUR [here] at the National Gallery of Art in Washington, DC began the program.

The SinusTon Festival in Magdeburg, Germany, directed by Oliver Schneller, commissioned Livingston’s edition of the work in 2012.

Livingston to create a “piano concerto” version of the 1924 abstract film to be performed by a solo pianist while the other instruments in the piece (xylophones, bass drums, siren, tam-tam, grand pianos, electric bells, airplane propellers, and multiple player pianos) would be played back electronically over an array of eight loudspeakers, in an arrangement known as an “acousmonium,” while the Léger/Murphy/Pound/Ray film screened simultaneously. Livingston determined which sections of the piano parts of the piece would be best for him to play, and then engaged Paul Lehrman to create a custom MIDI sequence and produce audio files for the acousmonium tracks, along with a click track for the soloist to follow. 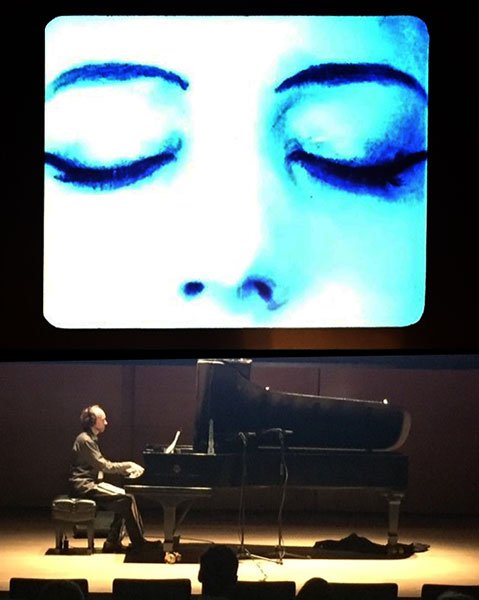 The new version, with additional technical contributions from Schneller, had been planned for debut in Magdeburg on October 24, 2013, but the day before the concert an unexploded 1000-pound bomb dropped on the city by the allies in the waning days of World War II was discovered in the basement of a nearby building. Part of the city was evacuated and the concert was postponed until authorities could disarm and remove the bomb. The world premiere finally took place three days later. [here]

The North American premiere of the concerto version, with Livingston as soloist, took place on April 21, 2016, in Montréal, as part of the “Big Apple Jam” benefit concert produced by the Société de Musique Contemporain du Québec, and this week’s performances mark the U.S. premiere, bringing the Ballet mécanique back home, once again.

Ed. Note:  Three short edits have been made to this review.