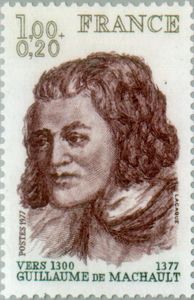 Boston’s Blue Heron singers and the Cleveland-based early music instrumental ensemble Les Délices will be reviving Guillaume de Machaut’s Remede de Fortune (A Remedy for Fortune) in a multimedia extravaganza encompassing narration, music, and projected images. A cleric schooled in both Latin and French, poet, musician, and composer Machaut served as secretary and companion to John of Luxembourg, king of Bohemia, travelling all over Europe with him until the blind king’s death in 1346 in the battle of Crécy during the Hundred Years’ War. Machaut also drew support from a number of other royal and aristocratic patrons, including John’s daughter Bonne, who died in 1349, her husband, the duke of Normandy, later John II of France, and their son, Charles V of France. By 1360 or so he seems to have taken up residence as a canon at the cathedral of Reims, where he was buried in 1377.

More than 15 long narrative poems, a collection of lyric poetry known as the Loange des dames (Praise of Ladies) and musical settings including 19 lais, 23 motets, a setting of the Mass, a hocket, 42 ballades, 22 rondeaux, and 33 virelais comprise Machaut’s oeuvre. These works have survived in six manuscript volumes, some of them lavishly illustrated by the best artists of the day; each contains all the poetry and music Machaut had completed by the time that book was copied.

We talked with Blue Heron’s music director, Scott Metcalfe, about the upcoming collaborative presentation of the Remede.

VN: Why did you choose the Remede, and how did your collaboration with Les Dëlices come about?

SM: The Remede cries out for performance: it has a convincing narrative, music of very high quality, and vivid manuscript illustrations. Debra Nagy, director of Les Délices, and I met in Portland, Oregon, some years ago playing French Baroque music. I’m a Baroque violinist, she’s a Baroque oboist, but we both already had a strong interest in medieval music. We’ve collaborated on 14th-century programs in Cleveland and in Cambridge, and last season on an Ars subtilior program called “Songs of Hope” in Watertown.

How did you decide what to include on this program?

First of all, we wanted to do complete performances of all the musical pieces that Machaut inserted into his Remede narrative. We did have to make a couple of compromises, though. It takes about 15 minutes to perform all 12 stanzas of the Lai and about 45 for the 36 stanzas of the Complainte. The music of the Lai is compelling in its development: each stanza (except the last, which matches the rhyme scheme and melody of the first) has its own metrical structure and its own melody, and there are continuous shifts in pitch level that make it hard to omit stanzas. In the Complainte, on the other hand, all stanzas are sung to the same music, so our task was easier. The narrative text, in rhymed couplets pairing eight-syllable lines, is full of assumptions and allusions that would have been known to Machaut’s listeners and readers but remain obscure to modern audiences. We have replaced most of the narration with songs and motets, mostly by Machaut, that explore the same themes as the Remede.

What sources did you use in preparing your performance materials?

We made our own editions and translations of the texts and the music, with help from published editions. We’ve also consulted with art historian Dominic Leo at Duquesne University in Pittsburgh, who has specialized in the illuminated Machaut manuscripts, and Matilda Bruckner, Professor Emerita at Boston College, an expert on medieval French literature. Professor Bruckner will give the pre-concert talk at the March 17th performance.

Will the characters—the Lover, the Lady, Fortune, and Hope—be costumed?

No; costumes and staging are provided by the projected images from the manuscripts, which will be shown on a giant screen. Also projected will be supertitles that provide slightly condensed translations of the sung lyrics. Although they appear in concert dress, the characters themselves are actually impersonated by the singers. Jason McStoots will read short passages from the narrative, describing the essence of the action in our own English prose translation.

Finally, what drives your decisions about performing forces and performing styles?

First of all, the manuscripts tell us very little about how these pieces were performed. Take the monophonic pieces, the Lai, Complainte, Chant royal, and Virelai, for which only a single line of music was notated. Only for the Virelai is it specifically stated in the narrative that no instruments are present, as demonstrated in a manuscript image showing courtiers dancing in a circle. Were the other monophonic songs accompanied? If so, how? By a drone on an implied keynote? By an added countermelody? We experiment with various possibilities based on the implications of the melodic line. What about polyphonic (many-voiced) pieces, where only one voice carries a text? What do we do about the one, two, or three additional parts, which are consistently untexted in all the Machaut manuscripts? In the manuscripts prepared under his supervision, Machaut carefully coordinated text and music, syllabic passages alternating with melismatic sections. Attempts to apply text to untexted parts do not seem convincing to us. We vocalize these parts on a single syllable, or play them on instruments of the period belonging to the “soft” (chamber) rather than “loud (outdoor) categories: lute (played with a plectrum), harp, fiddle, recorder, and douçaine, never shawms or sackbuts. Relative rhythmic values are precisely notated in the manuscripts, but tempo is never indicated; we draw inferences from implied dance patterns and from singers’ natural breathing and phrasing. Although relative pitches are clear on the five-line staff, there was no absolute pitch standard: the staff and its clefs show only where the semitones are, but nothing about actual pitch frequencies. We set pitches that are good for the voices or instruments involved, which is what we believe 14th-century musicians would have done.

Performances are scheduled this week in Oberlin and Cleveland, and on March 17th at the First Church, Congregational, 11 Garden St., Cambridge, Participants are Martin Near, Owen McIntosh, and Jason McStoots, voices; Debra Nagy, recorders, douçaine, harp, and voice; Charles Weaver, lute; Scott Metcalfe, fiddle and harp. Musicologist Shawn Keener designed the projections Tickets are available at www.blueheron.org, where the program, program notes, and complete texts and translations are also posted.