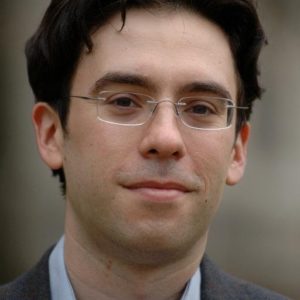 While the numbers of all those with vital memories of World War II are waning, music survives the passage of time. Next Tuesday afternoon at Radcliffe’s Knafel Center, Boston Globe chief classical music critic Jeremy Eichler, on leave as a fellow at Harvard’s Radcliffe Institute for Advanced Study, will be speaking on music and the cultural memory of the war and the Holocaust. He will discuss Strauss, Britten, Shostakovich, and Schoenberg, among other composers, making the case for hearing history, for reclaiming the power of sound as a unique carrier of meaning, in order to explore how the wartime past is inscribed in music. At the Radcliffe Institute Eichler is writing a book examining the relationship of cultural memory and music composed in the wake of the war, focusing on key commemorative works.

The free public event, the Julia S. Phelps Annual Lecture in the Arts and Humanities, takes place at 4:15pm March 7 at the Knafel Center, 10 Garden St. in Cambridge.

Cultural historian Jeremy Eichler is the latest in a long line of distinguished classical critics at the Globe, including Michael Steinberg and Richard Dyer and many notable stringers. Eichler has also taught at Brandeis. His work has appeared in the New York Times, the New Yorker, the Washington Post, and the New Republic, and he has been recognized with an ASCAP Foundation Deems Taylor Award. He was also featured in the Proust Project, a collection of contemporary writers responding to the French author. Eichler earned his bachelor’s degree at Brown and his doctorate at Columbia, where his 2015 dissertation centered on Arnold Schoenberg and the creation of the first major musical memorial to the Holocaust, and was awarded the Salo and Jeanette Baron Dissertation Prize. Eichler’s work has been supported by grants from the Center for Jewish History and the German Academic Exchange Service.

His talk is part of the 2016–2017 Fellows’ Presentation Series. The Julia S. Phelps Annual Lecture in the Arts and Humanities was established to honor the late instructor in the Radcliffe Seminars, and is supported by contributions of her family, friends, and colleagues.

Comments Off on Speak, Memory, or Wassup With Jeremy?