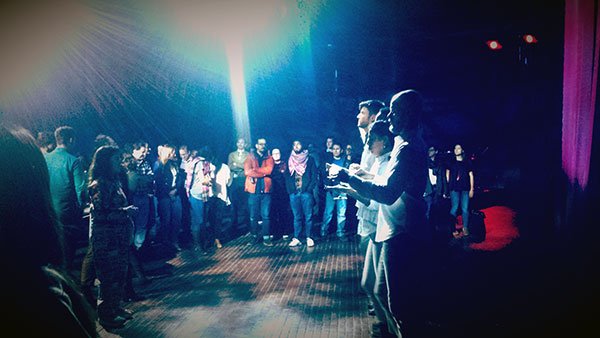 A unique performance-art experience was to be had last Thursday in the historic Cyclorama: Masary Studios’ site-specific commission Know No., an interactive multimedia work combining eight percussionists, four vocalists, poetry, installations, and dreamlike lighting and projected imagery that moved and morphed in synch with live music.

Masary Studios, formed from the first two letters of each artist’s name, comprises composer and percussionist Maria Finkelmeier; new-media artist and designer Sam Okerstrom-Lang; and interdisciplinary artist Ryan Edwards. Because they specialize in site-specific immersive performance and installation art, the Boston Center for the Arts approached them to create a “risk-taking” project that would celebrate the Cyclorama. It is the first major commission in the space in decades.

Constructed in 1884 to house a 400 ft long mural of the Battle of Gettysburg, it has since been everything from a rollerskating rink, fringe theater, boxing ring, riding corral, carousel, and industrial space to site of the sparkplug’s invention and home of the Boston Flower Exchange. One is immediately struck by its lofty 127-ft. clear span. A monumental metal grid by Buckminster Fuller hangs just below the giant dome, at one time the second largest in America. The radiating, riveted steel and iron arched wishbone trusses combine with surrounding brick and wood, to create an inspiring industrial fortress.

Know No. is an exploration of the repercussions of no that uses the words and voices of Boston poets reacting to the narrative of “no.” It engenders music that exploits the extraordinary acoustics of the space—which echoes and reflects sound in mysterious ways; a clip is here. On her blog, Maria Finkelmeier, who composed the project’s music, explains that no’s two letters represent a variety of things: “an abbreviation for number, a scolding term, one of the first words a child learns (and misuses), an abstraction of justice, a tool to empower, or the [re]spelling of ‘know.’” While the audience gathered in the space surrounded by four strategically constructed ministages of varying heights and myriad iridescent fabric installations, four performers stood on one stage shaking their heads in synch from left to right in silence. With lights dimmed and a faint, otherworldly rumbling beginning from somewhere in the distance—or was it right next to you?—we hear the lyrics from Fred Marchant’s A Spell To Stay the Hand:

A graceful cacophony permeated the room, as percussionists painted an intermingling of patterns that engulfed the standing audience and invited them to explore. Timpani pulsations underscored a jarring foreboding while vocalists glided away from their starting places and from one another, tracing a triangular maze along the grid’s beamed paths. Maria Finkelmeier explained that she created her composition based on formulas used by Buckminster Fuller to construct the grid:

Then out of the darkness and from the elegant intermingling of scattered metallic timbres, a single abrupt drum explosion activates large-scale human portraits—living portraits—that morph and melt on ceiling-height strips of fabric flowing from the grid and along the smooth walls of the chamber. The faces emerge one by one, until two sides of the large space are dominated. Their transforming expressions are hypnotic—akin to an acid trip—with bulging and dilating eyes that melt eyelash into eye line, nose into lips, expressions verging from sorrow to elation, hurt to forgiveness, calm to worry, hate to evil. They all communicate “no”— some shaking their heads and mouthing the word while others employ expression only.

The intensity dissipates as large metal chimes cast reverberations into the chasm. The performers weave through the room carrying makeshift instruments composed of keys. White pleasant lights bathe the room as the singers chant sounds that vaguely sound like “yeah.” The ambience feels positive, almost delusional. But then a quieter mood descends upon the place and activity slows. We hear voices once again as the percussive instruments weave a relentless onward march, which is then mirrored by eight performers—all dressed in white—who unite on the floor and slowly emerge from beneath the cascading fabric, now colored hot-pink by projected lights and lit by bright white lights from below. The performers line up side by side and slowly march forward through the space, as the audience makes way, creating a path. One observer stares them down, seemingly frightened at their forward march, staring at them agape as they continue toward her—her feet stepping backward, face facing them—until the hypnosis is broken and she becomes aware she must step aside.

Finkelmeier makes eye contact with the other percussionists on far sides of the room, exchanging glances that signal critical changes requiring careful synching. Layer upon layer of drum pads, marimbas, drums, woodblocks, chimes, gongs, and more embrace the room as a colorful lightshow erupts onto the cascading fabric and the space suddenly feels like an avant-garde dance floor.

The interactive performance space is now filled with poetry: “We are the children of those that grow up without choices, so we grew up without options…. So we grow, we know, everyone has their maker…. No is a pause. We say selah to the knowledge that is sought—the end result of stop—We know we are no.” A harmonious resolve now embraces the space, a feeling of resolution; and the same kettledrums that felt jolting in the beginning instill confidence, in synch with the rhythmic web. The lights go out. A continuous rhythm cycle resumes. The voices reemerge. We are returned to the primordial mix we began in.

Comments Off on Knowing the Space of Know No.