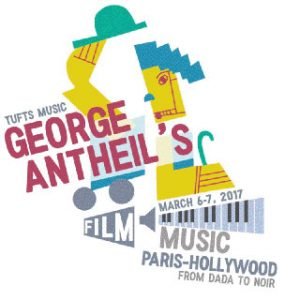 Celebrating another revival of a certain amazing musical confection for three xylophones, four bass drums, tam-tam, two pianists, seven electric bells, a siren, three airplane propellers and sixteen synchronized player pianos, Tufts professor and George Antheil specialist Paul Lehrman will be mounting a two-day celebration of the film scores of the musical “Bad Boy” from his Dada days in 1920s Paris to his dual careers in Hollywood as a film composer and a critic of film music. The program running from noon on March 6th through the next evening includes a double premiere showcasing the work of a singular individual and his contributions to film music. The relationship with Hedy Lamarr and torpedo guidance will not be mentioned, or maybe it will.

Beginning at noon on March 6:

Mary E. Davis, dean of the Fashion Institute of Technology, speaks on how Paris in the 1920s created artists like Antheil, Satie, Joyce, and Picasso

Daniel Robinson opines on Antheil’s biting the Hollywood hand that fed him.

Bruce Posner explicates reviving and revitalizing Ballet mécanique the extraordinary avant-garde film by Fernand Léger and Dudley Murphy. He will conclude with two versions of the film projected simultaneously over Lehrman’s 1999 orchestral reconstruction of Antheil’s score

Marni Nixon, who died recently, was to have been present for Lehrman’s a tribute to the late soprano, who worked with Antheil when she was young and later became the most famous unknown singer in Hollywood. The show will go on.

The World Premiere of a new 2K digital restoration of Ballet mécanique accompanied by the US premiere of a new version of Antheil’s score for solo piano and acousmonium of eight loudspeakers, performed by Guy Livingston.

Bruce Posner’s work on experimental films is highlighted in the video above.

All events take place at the Granoff Music Center at Tufts,

Admission to all events is free. Details here.

12:00 noon • Varis Lecture Hall (Granoff 155)
Colloquium: Guy Livingston—“Drinks with the Dadaists”
with guests Alanna (Battat) Rantala and Shannon Wettstein
A program of film and music from the Dada movement, which was born in Zurich, Switzerland, in 1916.

12:00 noon  Varis Lecture Hall (Granoff 155)
Colloquium: Paul D. Lehrman—“What Was George Thinking?”
How did Antheil expect to get 16 player pianos to play together in his Ballet mécanique? Some surprising answers.

Bruce Posner—Reviving the Ballet mécanique
Film historian and restorer Posner discusses the long and complex history of the Léger/Murphy film and shows two versions of it simultaneously.

Comments Off on Yes, We Have No Propellers