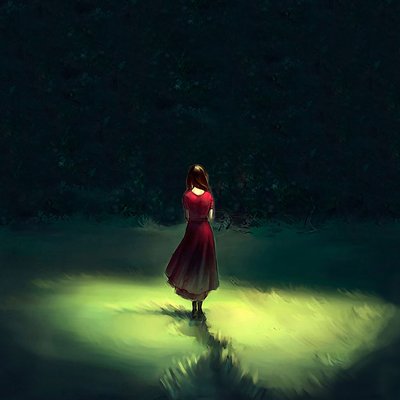 Thursday was an exceptionally warm night—the first time I’d worn heels in months—the cold, salty winter ice collapsing beneath my feet before I arrived at a theater alive with the buzz of young people, faculty, and performers’ parents eager to submerge themselves in quiet pride: They were there to hear their friends, colleagues, and beloveds on stage, singing and playing a leading American composer’s work for its Boston University Opera Institute premiere.

Tobias Picker’s very first opera, Emmeline was about to begin a run of four (double-cast) performances at the BU Theater under conductor William Lumpkin. I was immediately struck by a bold, elegant set, comprising a monolithic, multi-tiered pale brick facade, illuminated with dynamic lighting and a bright, ever-present golden moon.

Santa Fe Opera commissioned Emmeline and first performed it in 1996. Based on Judith Rossner’s 1980 novel, it tells the true story of Emmeline Mosher, who, through an unfortunate twist of fate, married her son. With a libretto by J.D. McClatchy, poet and president of the American Academy of Arts and Letters, Jim Petosa’s BU production begins in Fayette Maine in 1841 on a stage bathed in moonlight-evoking blue. The burial of an infant is at hand and 13-year-old Emmeline quietly watches her parents grieve. Her world-weary, imposing Aunt Hannah—played by mezzo soprano Emily Spencer—decides that the best thing for this broken family is to send Emmeline to work in a textile mill in Lowell Massachusetts, where the young girl can earn money for them. Emmeline’s father disagrees, protesting that his daughter is much too young to be sent away, but Hannah’s will prevails, as she reminds him that he has “always been a foolish man.”

Emmeline is cast into a debased factory life, surrounded by girls who are savvy, mean, quick to gossip. The 13-year-old is lost in this harsh environment, whose cold efficiency is musically punctuated by rhythmically driven phrases which every few bars leap jarringly from the monotone to the hysterically dictatorial, underscoring the emotionally discordant and utterly impersonal nature of the work and place. Helen Hassinger’s performance as the 13-year-old Emmeline appeared somewhat uncertain during much of this first act, with wide-eyed expressions that seemed to shift—at times wildly—giving an unsettled gloss to a performance that seemed to disclose an artistic uneasiness, rather than an anguished young girl. The chorus of mill girls delivered an assured and well-choreographed performance in each scene however, and the combined energy of all actors onstage kept the story’s momentum.

Emmeline’s innocence catches the attention of the mill owner’s son-in-law, Mr. Maguire, a handsome Irishman who begins lavishing attention, pleading, “Let me be your father, let me be your friend.”  Baritone Erik Earl Larson created a charismatic Maguire whose confidant wooing of a girl young enough to be his daughter came across as it should have, i.e. properly disturbing. Yet Picker’s melodically oriented vocal writing and tonal harmonies cradle both the ear and the mind, fashioning a distance between the audience and the disturbing story unfolding onstage. I witnessed the seduction of a child by a married man old enough to be her father, and yet did not squirm in my seat wondering how much of the appalling scene I could take. Instead, I looked and listened, simultaneously embraced by sonority and incredulous that Maguire is making moves on a 13-year-old, treating her as though she is a woman, telling her that his wife is cold and that he needs someone to throw his heart at.

His strategy works. She is hooked. Away from home, lonely, and still a child, Emmeline has no idea that what she thinks is love is actually rape. The seventh scene opens with Emmeline’s fatigued figure crumpling to the factory floor, as the other girls gossip about Maguire’s avoiding her for the past weeks. He enters with his wife, and an angry Emmeline nearly confronts him—when she suddenly faints. He slips her money and tells her she must leave the mill forever. The wife—played by Bridget Cappel—realizes her husband’s indecency and wraps her fancy shawl around the young Emmeline, walking out after shooting Maguire a knowing, indignant glare.

Now secretly living with her aunt—played by mezzo Emily Spencer—Emmeline keeps her pregnancy private, as Hannah arranges for the newborn’s adoption, insisting that it is better for her niece to remain ignorant of the baby’s sex. Emmeline fantasizes that her child is a daughter, and her aunt neither refutes nor encourages the assumption. Soprano Helen Hassinger enacts giving birth onstage, and the uncertainty of Emmeline’s world closes the first act with an agitated orchestra and a violent cloak of blackness.

The second act begins 20 years later. Emmeline lives again in her hometown, consciously avoiding marriage. Her father—played by Joseph Hubbard—urges her to consider an eligible moneyed bachelor, but the 34-year-old proclaims that “marriage is not for the likes of me.” An itinerant worker named Matthew Gurney rolls into town. Just 20, he possesses an innocence and warmth that immediately attract Emmeline. Her renunciation of life and love dissolves as their bond develops and she teaches him how to read. He tells her his secret—that back in Kansas, where he is from, he has a child out of wedlock from a woman who chased after him, “not the other way around.” Tenor Dennis Shuman’s voice possesses a lyrical quality that instantly convinces one that Matthew is an ingenuous, gentle soul who is telling the truth. Instead of condemning him for abandoning his own child and a woman he impregnated, one grasps how the damaged Emmeline finds solace in his good nature. 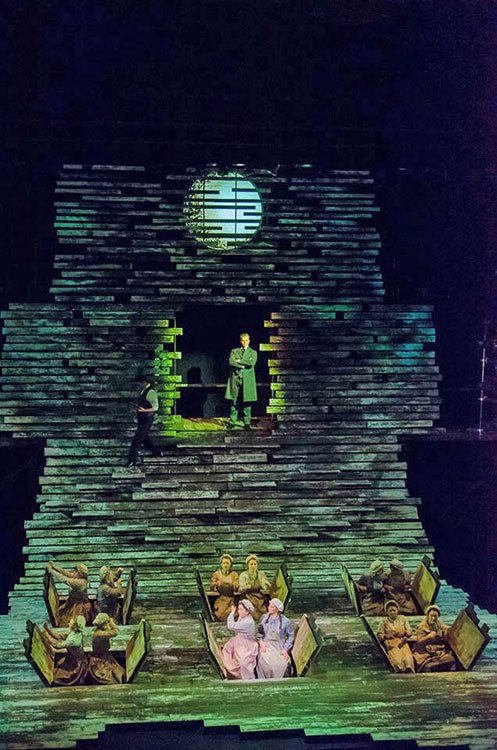 He asks her if she too has a secret, which she denies. But when Matthew becomes determined to marry her, Emmeline tells him that he hardly knows her at all. Inebriated by love, he ignores this warning, and the two wed, despite the many judgments cast upon them for their vast age difference. Of special note is Ashlee Lamar’s rendition of Harriet, Emmeline’s jealous, malicious sister. Lamar’s poignant acting and precise diction convey the character’s vitriol clearly enough for one to avoid the supertitles and indulge in Harriet’s deliciously odious persona.

They enjoy unbridled love until Emmeline’s mother dies and Aunt Hannah comes to the funeral. Her initial approval of their happiness turns to horror when she realizes Matthew is none other than Emmeline’s child. In an emotional duet that at last reveals Hannah’s humanity, she compassionately laments to her niece that she has come for a second time to effectively take Matthew away. The unwitting architect of Emmeline’s destiny, Hannah now must carry the weight of actions which have now undone two lives.

Matthew is disgusted and leaves Emmeline, ferociously accusing her of deceit. Emmeline’s father disowns her, pointing a shotgun at her breast as he follows his wife’s funeral procession. The entire town regards her a pariah, and even the priest urges her to leave, giving her a handful of cash to set out and never return. Defiant, she throws the money at his feet, rejecting all those that have repudiated her.

In the opera’s most powerful scene, Helen Hassinger takes center stage, hair loosened and body disheveled. Emmeline recalls her life, the innocence ripped from her, the illusions of love and family, her blissful romance with Matthew, and the visceral, different love she now feels, knowing that he is her child. She recalls the factory’s monotony—the coordinated mechanics of the mill—and exalts the passion living within her, declaring she will wait for Matthew to return. Hassinger’s portrayal was strongest at this moment, which felt like both Emmeline’s death and rebirth—a renunciation of cruel fate and a welcoming of palpable ardor despite the repulsiveness of the reality. Lumpkin and his excellent players and singers stunningly revealed Picker’s gripping drama, culminating in an orchestral and vocal ascent that left this audience scrambling for footing at the edge of the precipice.