Formed in 2003 by former Westminster Abbey choristers, and now, finally, after the past eight years of touring the U.S., VOCES8 has come to Boston. The highly acclaimed British octet was nothing short of stupendous performing repertoire from the Renaissance to jazz and pop arrangements. Yes, they were absolutely enthralling, or so at least through the first half of their “concert,” which is how they call it. For checks and balances, it need be said that most if not all of the concert-goers were enamored by these top-notch singers.

Celebrity Series presented the young and vibrant vocal ensemble not only on Wednesday in Cambridge at Pickman Hall, Longy School of Music, but also the following evening. Both performances virtually sold out. So, who attends? Mostly the curious, and at least some were amateur singers in local choruses.

Getting back to their “concert…” With a good bit of choreography along with the eight choristers one by one providing introductions to each of the items on the program—as well as to themselves—that would rather suggest some kind of hybrid to me. Their presentation divided fairly neatly into two halves, a concert and a show.

For the evening’s opener, a psalm setting from the English reformation composer William Byrd, his Laudibus in Sanctis, set a joyful “concert” tone. Artfully drawn polyphonic textures resounded brilliantly if a bit under blended, a matter more a question of taste than of execution, perhaps.

More concertizing continued this time with a psalm setting from the early Romantic Felix Mendelssohn’s Den Er Hat Seinen Engeln Befohlen Uber Dir, MWV B53. And that 300-year leap in time could not have been anything other a than ear opening history lesson. VOCES8 shifted completely to the psalm’s developing harmonies turning them into rare spiritual consciousness.

Leap again some 200 years more to a contemporary setting of Ubi Caritas by Norwegian born, New York composer Ola Gjeilo. The Lenten antiphon took first to unison then simpler homophony. But it was when Gjeilo left those older familiar sounds for newer ones that VOCES8 plotted a course into the celestial sphere.  With this wiring of old and new, the ensemble exposed unimaginably serene, delicate vocal interlacing.

Next they jumped from Christian expression to the American vernacular: doo, doo, doo be, were bouncy backups to the solo singing of the first and only American to become a member of VOCES8. Fun it was, with vocalized big band sounds in Straighten Up and Fly Right. Yet, when The Sound of Silence began with wordless imitations of the Simon & Garfunkel ‘60s bell-like guitar opening followed by a deepened bass solo on the that unforgettable American folkish song, with those melding voices, came melting ears. Strangely exquisite it was. As transformative as was the arrangement, essence of the original feel pervaded remarkably.

Nonstop versatility then featured Benjamin Britten his early A Hymn to the Virgin, where four sang in English facing us, the other four behind them and facing the wall singing in Latin. Genuine conviction stirred at every “call and response.” Then, Rachmaninoff, then Palestrina, and then came the end of the first half. Left transported by their voiced wonder in both the sacred and secular, exhilarated by their extraordinary means of accomplishing that, I could not believe that 45 minutes had elapsed. Where had VOCES8 taken me!

Perhaps due to my all too high expectations, the show that came after intermission fell short. “Steal Away,” “O Waly Waly,” and “Shenandoah” arrangements forgot their countries’ roots, idioms if you will. The music of Kate Rusby, Ben Folds, Irving Berlin, Carly Rae Jepsen, Jimmy Van Heusen and Duke Ellington ranged from reminders of high school a capella fare of yesteryear to VOCES8’s perhaps over-refinement and redefinition soon became too predictable, and too light for this listener. I am probably alone.

VOCES8 should not be missed live. Their concert and show should stick around in our memories for quite some time. They are indeed versatile, polite, polished, and charismatic. 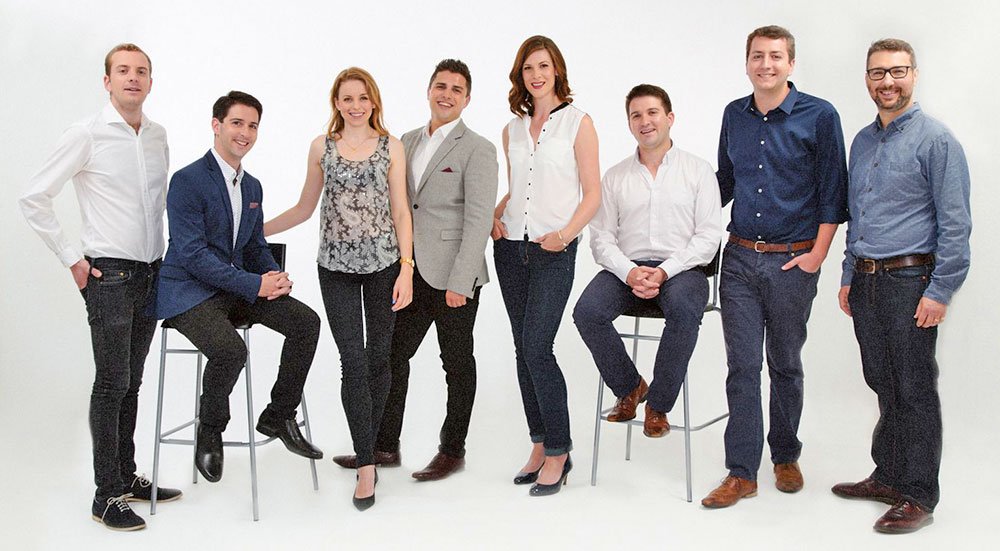 Comments Off on VOCES8 Finally in Boston!