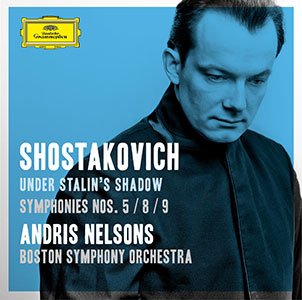 Considering his upbringing in a formerly brutalized small country that only recently had come into liberalization and independence, it’s not surprising that Latvian conductor Andris Nelson has deep responsiveness to a collectively remembered dark past.

For the second year in a row, the Boston Symphony Orchestra under Andris Nelsons has garnered the Best Orchestral Performance Grammy for the latest in its Shostakovich Under Stalin’s Shadow cycle. Again for the DG label, this year’s performance was of Symphonies 5, 8, and 9, plus incidental music for Hamlet, following last year’s live rendition of Symphony 10, plus the Passacaglia from Lady Macbeth of Mtsensk.

NPR’s Ted Libbey has written, “It was his music … which in its darkness and pain, its litany of hope crushed, its sense of the grotesque, the absurd, the paranoid, and the vicious—above all its grasp of suffering and sadness—which revealed the essential truth of the time.” Congratulations to the BSO and Music Director Nelsons for their second step, and repeat Grammy, in this important achievement.
The recording was produced and engineered by Shawn Murphy, with Recording Engineer Nick Squire, and Assistant Engineers Joel Watts and John Morin. The album was edited by Nick Squire, Robert Wolff, and Tim Martyn.  Silas Brown and Brian Losch were Production Assistants. Tim Martyn of Phoenix Audio was the Mastering Engineer. The Executive Producer was Sid McLauchlan from Deutsche Grammophon

Clemens Trautman, GG CEO writes, “It is a very rare occasion that an album is nominated for both its artistic and its sonic qualities. And we are thoroughly grateful and excited to actually receive a Grammy for Best Orchestral Performance, particularly after last year’s win for the first installment of our Shostakovich project. This underlines Andris Nelsons’ and the Boston Symphony Orchestra’s commitment to the highest quality standards – an aspiration that DG has shared with the BSO since the outset of our collaboration half a century ago. For each recording project DG attempts to find the ideal constellation of musicians, producers and engineers. We could not have hoped for a better team to revivify the oeuvre of Shostakovich whose music is more contemporary and moving than ever in the precarious state of our cultural and political affairs across the globe.”

Boston Symphony Orchestra and Andris Nelsons’ Partnership with Deutsche Grammophon
“Shostakovich Under Stalin’s Shadow” constitutes an ambitious multi-year recording partnership beginning with works composed during the period of Shostakovich’s difficult relationship with Stalin and the Soviet regime and eventually including the incidental music from King Lear and Hamlet, as well as the Festive Overture along with a full survey of Shostakovich’s 15 symphonies.