The concert pamphlet’s exhausting list of performances, tours, and awards Eroica has given over the years might not have been the best starter for newcomers such as me. I guess, though, that such is par for the course these days in a world where we find ourselves with so much wealth of talent and accomplishment.

Surely, Eroica’s programing for the Gardner was a bit on the daring side I would say. And judging from a Calderwood Hall not quite full and the relatively mild applause following Messiaen’s big work, it could be stated that Eroica did take some chances. And for this, their special offering, there should be a standing ovation.

But then, Calderwood Hall may not have been the most empathic venue for this ensemble. “The three women who make up this celebrated ensemble electrify the concert stage with their passionate performances.” So the pamphlet goes on to say.

Some distance between their electrical and passionate playing seemed in order particularly in their loudest segments where a near din often materialized. However, when taking their softest, most intimate turns, each member of the trio could leave you in some very real wonder. Certainly, this youngish yet well-seasoned trio could summon some of the most extreme contrasts.

Pianist Erika Nickrenz, violinist Sara Parkins, and cellist Sara Sant’Ambrogio are no doubt technically proficient, possessing the firmest of grips on the speediest of passages, and on both the tiniest and biggest of sounds. The fine tuning that came with the Bach and Messiaen territory would leave no doubt about Erocia’s superb artistry.

In the Johann Sebastien Bach Chaconne from Partita No. 2 as arranged for piano trio by British composer Anne Dudley, unsurprisingly mixed feelings materialized. The awe that comes from a wizard on a solo violin could not of course become a factor in such an arrangement. That “recreation of the mind” that comes with Bach and that intimacy that comes with the single stringed instrument were no longer. Rather, Beethovenian dramatics kept taking my mind elsewhere.

Eroica Trio’s frequent leaning on aggressiveness, a 21st century property, in combination with the obvious textural assignments of the arrangement disappointed. One truly bright moment sounded in the opening, the cello leading, then the violin and piano entering—ever so promising.

Principal Clarinetist of the Atlanta Symphony since 1982, Laura Ardan joined Eroica in Olivier Messiaen’s best known work, Quartet for the End of Time. In her brief introduction, Ardan spoke of the rhythm the innovative French composer developed and how Eroica and she had to concentrate on counting. “The end of time,” she queried?

In the “Liturgy of crystal,” the piano’s ribbons of harmony needed to be lusher, less remote and in play with the colors of the other instrumentalists. In the following Vocalise, balance became problematic, the piano overtaking the others.

With Messiaen’s monophonic writing where all are asked to play the same melodic line, there was absolute agreement with unflagging timing and tuning—and phrasing as well.

Ardan’s clarinet stood in the forefront on the solo piece “Abyss of the birds.” Extreme softness, near silence so still and so quiet playing issued forth. 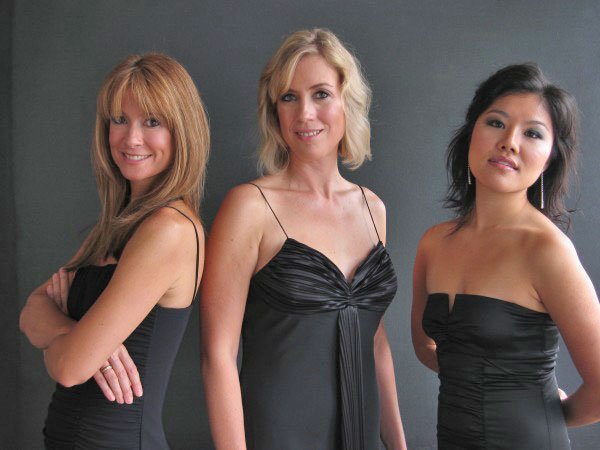 Bird chirping and clashing colors were just part of the exceptional joyous clatter the quartet brought to “Cluster of rainbows, for the angel who announces the end of Time.”

Both duets, one for cello and piano and the other for violin and piano praising eternity and immortality spoke or gestured instead of soaring, bringing the devout Catholic’s spiritual document heading earthbound.

Eroica Trio with Lawrence Dutton, viola, will perform this coming Sunday, February 5 at 1:30.

Comments Off on Revved Up and Earthbound Eroica