The London Haydn Quartet and clarinetist Eric Hoeprich came back to First Church, Cambridge (Congregational) on Friday night for the Boston Early Music Festival; their stunning local debut had been in 2014. This year’s program of the Haydn Op. 77, No. 2; Beethoven’s Op. 18, No. 2; and Weber’s Clarinet Quintet had the same impressive blend and exquisite execution, but somehow the result felt more subdued, and didn’t jump off the stage the way it did three years back.

The quartet arranged themselves on the concert stage with first violinist Catherine Manson, second violinist Michael Gurevich, violist John Crockatt, and cellist Jonathan Manson sitting from left to right. They opened with the final completed string quartet of their beloved Franz Joseph Haydn, the Quartet in F Major, Op. 77, No. 2.

The ensemble’s phrasing was suave and tasteful, tuning was meticulously controlled, balances were superbly judged, and the four individual voices could be heard in crisp, clean counterpoint. Motifs moved between parts with an easy give and take, and fast passages were carried off with tight rhythmic unison. Catherine Manson dispatched Haydn’s many virtuosic passages for first violin with style and flair, and Jonathan Manson played a delightfully droll marching figure (in a duple time) which clashed with the triple time of the second movement Menuetto. The fourth movement Finale featured high spirited humor and sharp syncopations, impressive dynamic control, and a beautifully timed drawing out of the suspended movement right before the mad rush to the finish.

Haydn’s last string quartet was followed by one of Beethoven’s earliest, the G major, Op. 18, No. 2. Even in this early example, Beethoven breaks up big musical phrases and scatters them among the various instrumental parts; with the London Haydn Quartet, you could follow the big phrase seamlessly. In the first movement’s development section, they beautifully negotiated the transition into a minor key harmonic wilderness. The recapitulation took advantage of Beethoven’s deceptive cadences by building up harmonic expectations, then deftly shifting in an unexpected direction. The second movement Adagio was played with noble serenity, followed by a suitably abrupt transition to the central, rough-humored Allegro, then back to the Adagio in a way that felt equally abrupt and inevitable. The third movement Scherzo had lovely dovetailing of musical motifs between the violinists Catherine Manson and Gurevich, and ringing, stunningly tuned chords in the middle-section Trio. The final Allegro molto was jaunty and brisk, with more brilliant soloist turns for Catherine Manson, and more of Beethoven’s harmonic detours, before ending with a unison explosion.

The playing was all pleasant and agreeable. However, as I look over my review from 2014  [here], I can’t help but feel that this performance lacked the exuberant energy that I heard three years ago. John Crockatt joined the quartet about a year ago, and the cellist was a substitute in 2014, so half the quartet was different on Friday night. Perhaps they are still working out their ensemble, or maybe they were tired from having played in Atlanta on Sunday, Philadelphia on Tuesday, and New York the night before. Their tour schedule shows them playing at least four different programs in two months, so maybe it’s a problem of familiarity and fluency. Perhaps First Church’s echoing acoustics washed out the group’s restrained, smaller, period instrument sound. But where my notes from 2014 are full of dipping and swaying and eye contact, on Friday I saw eyes glued to their scores, little glancing back and forth at each other, and the music was ably played, but didn’t have as much verve or sparkle.

Clarinetist Eric Hoeprich, joining for Carl Maria von Weber’s Clarinet Quintet in B-flat Major, Op. 34, extended the quartet arch, sitting next to cellist Jonathan Manson and opposite first violinist Catherine Manson. Weber’s quintet comes across as a show off vehicle for the clarinetist’s technical skills. Hoeprich impressed with lightning-fast scale runs and rhythmically buoyant leaps, considering that his period instrument didn’t have the key system of modern clarinets that makes those fast runs easier. He soared to the top of the instrument’s register and dove to its depths with equal fluency, showed surprising 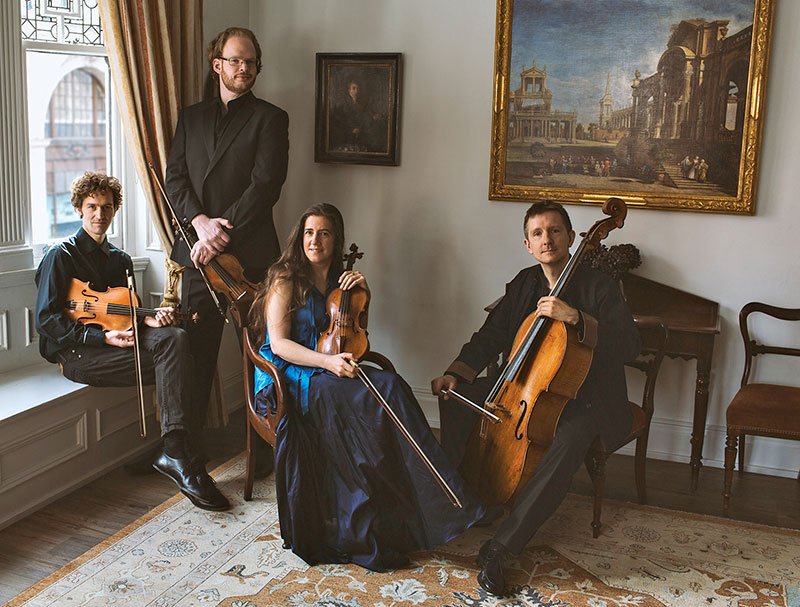 dynamic range with some strikingly sudden shifts mid-phrase, and played long, legato passages with a lyrical line. He injected a good deal of energy into the evening’s proceedings, though at moments the strings seemed reduced to accompanists rather than collaborators. The London Haydn Quartet nevertheless provided some lovely moments, not least the sumptuous chords that opened the first movement; Jonathan Manson’s sonorous cello solo leading to the melancholy aria-like opening of the second movement; and the counterpoint in the finale. The work finishes with a quicksilver flourish, though it missed the playful sense of exchange of the Mozart Quintet from 2014.

Hoeprich and the London Haydn Quartet continue their tour in Milwaukee on Saturday and Yale University (a repeat of this program) on Sunday, the 15th. The Boston Early Music Festival returns on February 5, with Jordi Savall at the helm of Hespèrion XXI.