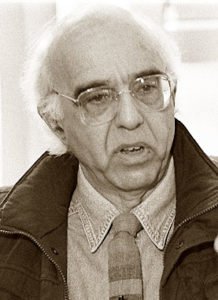 The content of some “modern” music is just as human as what is thought of as “classical,” composer Yehudi Wyner explained to the audience at the concert featuring his music at the Boston Athenæum on Monday evening. His explanatory remarks were well taken; although there were a number of active composers, music critics and announcers, and musicians in the audience, it was generously sprinkled with regular attendees at Athenæum events who might not have been as familiar with the modern-music scene in Boston.

The concert was the first of three by the superb New-York-based Ecce scheduled for this academic year by the Athenæum. It offered three pieces by Wyner: Concert Duo, for violin and piano (1955), Refrain, for solo piano (2011) and Trio 2009 (2009), that ended the program. Also heard were two strong complementary pieces, Trio No. 4 (2014) by Martin Boykan (born in 1931) and Tenebrae (2013) by Martin Brody (born in 1949, and a former student of Wyner). Violinist Jennifer Choi, pianist Julia den Boer, clarinetist Liam Kinson, and cellist Seth Woods, performed.

Wyner’s music, probably more easily digested than that of many other modern-music composers, deals very much with emotions, in very rich textures, with wide variety of rhythms, tempi, and dynamics, and, as he noted, “the power of pauses and punctuation.” The instrumentation of the Wyner compositions is inventive, often provocative, conversational, combative and bemused, by turn. His titles are often evocative. The endings of Wyner’s two latter pieces particularly left this listener with a profoundly satisfying emotional experience.

His goal, Wyner explained, is that each piece should lead gradually to a transformation for the listener. He is one of those so-called “modern” composers who seeks to evoke the same emotions—joy, fear, tenderness, tension, release, which we hear in “classical” music. “The essential values of classical music have to do with melodic shapes, harmonic progression and inflection, dramatic narratives, power of pauses and punctuation. These are the same values that really interact in so-called contemporary music. It is essentially the exteriors that have changed and make it less familiar.” But this is not the case with all “modern” composers, Wyner added in a later conversation. “The field is now so disparate, there are so many fragmentations. There’s music essentially based on abstract construction, deliberately avoiding human expression, believing that music should not be a mode of self-expression but a projection of ideas. My music is very traditional. I am so immersed in the traditional canon, as a player and a composer, that I do not depart into abstraction as a principle component. What is there is in the service of human expression. And even my form is a dramatic succession of events and ideas.

“I struggle to achieve a kind of continuity. I find that my compositions all have an important trajectory that leads inevitably to a transformation of states of mind as you get to the end. It is not a conscious goal, just a natural rhythm of my thinking.” He credits Mozart’s operas as “the essence of his work,” with this kind of transformation of the characters, and runs off the titles of a number of them. “The way he develops the whole experience into a highly affecting mode is so wonderful.”

Yehudi Wyner, one of this era’s premier composers, won the Pulitzer Prize in Music for his piano concerto, Chiavi in Mano. It had its premier, with Robert Levin playing, by the Boston Symphony Orchestra on February 17, 2005. In the same year, his recording “The Mirror,” on Naxos won a Grammy Award. (Both were before the birth of the Intelligencer, or they would have been reviewed here). Wyner’s other honors include two Guggenheims, and he has been commissioned by the Koussevitzky Foundation, BBC Philharmonic, and many other organizations. At a special birthday tribute from Dinosaur Annex on November 1, 2009, to celebrate his 80th birthday, with many musicians and former students, Wyner told the audience about his debt to his father, Lazar Weiner, director of music at the Central Synagogue in New York. He was “a prime mover in the preservation, even the rescue, of the Yiddish art song in America,” as Mark DeVoto noted in his review of the concert (here). Composer Scott Wheeler, co-founder of Dinosaur Annex, who was at the Athenæum concert, called Wyner’s Concert Duo “a powerful statement from the 1950s,” and said of his 2014 Trio for violin, clarinet and piano, “it is both sly and substantial. Yehudi is an inspiration to us all—he was born in 1929 and he still has the liveliest musical mind around. In fact, he writes circles around most young composers.” Wyner is married to Susan Davenney Wyner, former opera singer and now conductor of Boston Midsummer Opera and other productions.

The New York-based ensemble Ecce strives to bring contemporary music into the mainstream vernacular of live classical music. Jennifer Choi, violinist, previously was a member of the Miró String Quartet. French-American pianist Julia Den Boer studied with Gilbert Kalish. Liam Kinson, born in Australia, studied in the Contemporary Performance Program at the Manhattan School of Music. Seth Woods, a native of Houston, Texas, is as comfortable playing Baroque, band music, or rock, as he is with new music. Ecce is scheduled for two more performances in the Boston Athenæum series for this academic year: February 20th, a program entitled “Social Justice,” and April 13th, a program to be announced.

Many of the private library’s events are open to the public. Its calendar is here.