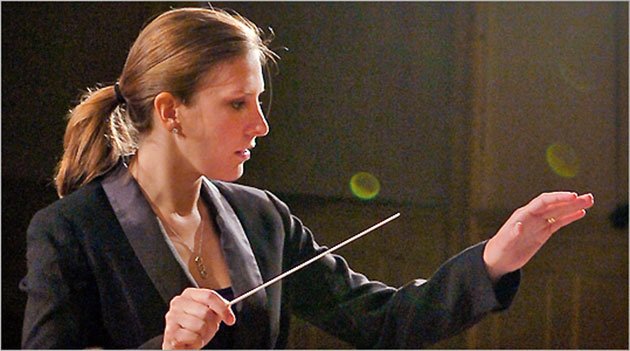 The Brookline Symphony Orchestra’s second music director candidate, Lidiya Yankovskaya brought Wagner’s Prelude and Liebestod from Tristan & Isolde, Ravel’s Tzigane for violin & orchestra, and Pictures at an Exhibition by Mussorgsky, in the Ravel orchestration to her concert-audition Sunday at All Saints, Brookline.

Yankovskaya is the Artistic Director of Juventas New Music, and primary conductor of Commonwealth Lyric Theater; she is also a sometime member of the Tanglewood Festival Chorus as well as its Russian-language coach and a candidate for the director position.

She opened without a stick, employing beautiful and fluid hand gestures that did not obscure the beat. This is not to be sneezed at. The conductor has the responsibility for shaping, and the opening of the Wagner, with its long phrases, and mysterious non-resolutions, gave ample opportunity for her to build anticipation. The cello section sounded sumptuous in its opening. The violins avoided being relentless or overbearing.

The “Love Death” aria followed directly with Michele Trainor, the kind of classic opera soprano whose glorious, powerful sound raises every hair on your body and makes you melt at the wonder of the human voice. She was born to sing Isolde. She had no difficulty carrying over the orchestra, which got a little exuberant at times. It is an unexpected pleasure to come across such a treasure of a performance on a Sunday afternoon in Brookline. She is a singer to watch.

In addition to being a fine violinist, Stacie Lin studies biology, brain and cognitive sciences and music at MIT. If her performing chops are any indication, she will go on to become a fine neurosurgeon as well an exemplar of the well-known affinity between medicine and music. The Tzigane places incredible demands on the soloist, and she blew it out of the water, executing Ravel’s bag of violinistic tricks, left and right hand pizzicato, extended passages with harmonics, and double stops galore with effortless gypsy sass. Yankovskaya held the orchestra together through some challenging sections; a few moments of phase sync irregularity and the accelerando at the end proved a bit scary, but overall one felt impressed.

After intermission, the orchestra presented a surprisingly uneven Pictures. Some of the tempi seemed a bit plodding, and the wind section was not as strong as the first half. The Gnome was especially shaky, and The Old Castle was plagued by wrong notes. There were excellent moments as well, with the Tuileries featuring superb clarinet playing by Sylvain Bouix. Bydlo was also very well done. The woodwind promenade was beautifully balanced. It was surprising to hear the orchestra struggle a bit after such an outstanding first half, which made me wonder whether the bulk of rehearsal time had been spent on that, with the seemingly more familiar work on the second half not getting the time it needed.

Yanovskaya introduced each work with a bit of explication interwoven with her personal experiences of the music. This can be a charming way to build a rapport while also breaking down the fourth wall. Clearly knowledgeable, Yanovskaya also engages.

Comments Off on Knowledgeable and Engaging BrSO Candidate