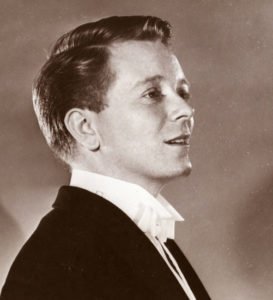 The stuff of legend since his retirement from the concert stage in 1965, the distinguished countertenor died in New York City on November 26, 2016 at the age of 88. Russell Oberlin’s legacy will long endure in the recordings he made and musicians he mentored and inspired. One such shares his personal tribute.

His beautiful, otherworldly, almost inhuman voice then epitomized the early music movement. In the 50s, when I was a junior or senior at Brown, the chamber music series at the School of Design Auditorium had brought in Noah Greenberg’s New York Pro Musica for a double bill: Flemish Renaissance music on the first half, Spanish Renaissance on the second. Although I had sung Renaissance partsongs in high school choir, and played a few lute transcriptions on my classical guitar, this concert delivered my very first hearing of an entire program of early music. By the end, I knew that performing this stuff was what I wanted to do. A vocation was born.

And that sense of being called had quite a bit to do with Oberlin’s voice that evening. Was it a man’s sound, or a woman’s? It was supported all the way up, without a break, and without resorting to falsetto. Magical, compelling. It was full, with continuous vibrato, dead accurate as to pitch and rhythm. There was something sexless or androgynous in the timbre, verging on metallic, as though an angel were singing from on high, in some celestial tongue unknown to man. Oberlin’s voice did not make you feel warm and cuddly; rather, it gave you some sort of cosmic, strangely delightful chill.

As I discovered later, listening to his other recordings, across several repertoires, it really did not matter much what language he was singing in, nor what style. If memory serves me, Oberlin made solo recordings of medieval English monodies, of 13th-century Spanish Cantigas, of English consort songs, of Buxtehude. He sang Oberon in Britten’s opera of Midsummer Night’s Dream (a career-ending overstretch of his instrument, as rumor had it). Leonard Bernstein hired him and NYPM colleague, tenor Charles Bressler, to sing the “Et misericordia” duet from the Bach Magnificat on network TV. Was he also the Evangelist in a Bernstein TV special about the Bach St. Matthew Passion? I believe so. None of those performances, as I recall, had much in the way of style-specific nuance, or text-inflected phrasing, or localized, in-the-moment emotional commitment. It was, always, about that incredible sound.

Oberlin’s way was my gold standard. Still an undergrad student, I recall meeting an Alfred Deller maven at a Manhattan bohemian party circa 1962. The Dellerite praised his countertenor hero’s nuance, delicacy, and infinite sensitivity to text. I criticized Deller’s falsetto technique, his preciosity, his lack of power and punch compared to the supernal Oberlin. I guess that it was, in a nutshell, a debate between old Europe versus young America. And I suppose we debaters were both right, in our way. But, at the time, I had trouble recognizing the legitimacy of my opponent’s viewpoint and musical values. Things change. Now, several lifetimes later, I still listen with pleasure to Deller’s old recordings; only rarely do I choose to hear something with Oberlin.

Yet that first shock of encounter with Oberlin’s artistry remains, and I am grateful for that experience, and for the ensuing vocation that it triggered. I wrote about that moment for a magazine about a decade ago, and, after the article had appeared in print, was surprised to receive a handwritten, carefully calligraphed note from Oberlin in acknowledgement. I’m quite sorry now that we did not communicate further at that point ten years back, and only wish that there was more to this memoir of sound than a final, irrevocable silence. Well, perhaps there is, as we all, each in succession, stumble ascending to Helicon, bearing our humble, imperfect offerings to the Muse.