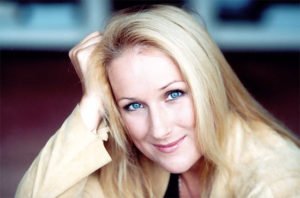 JC: An emerging singer, I have been humbled by your musicality, artistry, and generosity of spirit for years, and am so honored to have an opportunity to ask you some questions for our readers and for many young singers who will be in attendance on December 4th in Boston.

How did you come to decide the repertoire that you will perform, and what is your emotional connection to the French musical languages of Hahn, Debussy, Fauré, Duparc?

It is my love! Upon arriving to school, I developed an immediate and intense connection to the French language and poetry. So much so that during my studies I could not keep my hands off all things “mélodie.” Discovering that Xavier de Maistre has some of the same musical preferences, we had an extensive—almost excessive—session to find repertoire we could perform together. These are our favorites!

How does singing this specific repertoire with a harp differ from performing with a piano?

Xavier is, as we all know, a brilliant soloist on the harp, but he is also a master of accompaniment. He has the understanding of vocal music, and the musical sensitivity to react in the most delicate way with his colors and intensity. The harp has, as compared to the piano, a much broader spectrum of dynamics, from pianissimo—like a shimmer of the moon – to the true forte of great sound. As a singer you can sonically “paint” with a greater palette of colors and softness, but you are more exposed with a harp as opposed to being accompanied by the piano.

How has your understanding of, or thoughts about, the repertoire altered since beginning your collaboration with Xavier de Maistre?

It has deepened my sense of the possibilities that I have in performing song (as opposed to Opera) and has given me more courage for taking risks and exploring new sounds and level of interpretation.

What music, when no one is watching or listening, do you absolutely love to sing?

I love to sing almost all kinds of music, and cannot narrow it down to one piece or even genre.

What routine, if any, do you follow on the morning that you have a concert in the evening? Do you do anything differently on days off?

Under the perfect circumstances, I try to sleep as long as I possibly can, wake up, and have a nice healthy breakfast. I would then go to the hall and warm up the voice, going through the program by myself. Then a late lunch, a little siesta, and finally a warm up with my colleague/s at the concert hall. On days off there is no singing and only my family; I am a different human being :-)

How do you stay healthy (vocally and otherwise) with the amount of travel and performing that you are required to do?

I rest as much as possible, and always weigh the risk/benefits of singing fully in rehearsal rather than marking. When I learn new works, I do so “with the head” not the voice. I eat healthily and I often take walks in nature. Overall, I try to NOT panic.

What are some of the most profound things that you know now about the voice or being an opera singer that you wish you had the opportunity to tell “student Diana?”

Actually nothing. There are things you must experience and learn to negotiate; the rest will come.

In the past years alone, she has achieved great success in the role of Leïla in a new production Les pêcheurs de perles at the Metropolitan Opera, performed her first solo song recital in the Stern Auditorium of NYC’s Carnegie Hall, debuted as the Countess in a new production of Le nozze di Figaro at La Scala, undertaken a European tour of Strauss’ Four Last Songs with Kirill Petrenko and the Bayerische Staatsorchester, and sang her first Juliette in the Metropolitan Opera’s new production of Gounod’s Roméo et Juliette.

Xavier de Maistre belongs to an elite category of soloists who are redefining what is possible with their instrument. Aside from new commissions from composers such as Krzysztof Penderecki and Kaija Saariaho, he performs works like Smetana’s “Ma Vlast” with breathtaking precision, presenting masterful arrangements of works that are usually played by an entire orchestra.

His exclusive contract with Sony Music has so far yielded music by Haydn, Rodrigo, Ginastera and Debussy—the latter for which he was awarded the Echo Klassik Award 2009 as “Instrumentalist of the Year”. In 2012 “Notte Veneziana”, a recording of baroque concertos with the Ensemble l’arte del mondo, was released.  Highly acclaimed by the press, ‘Notte Veneziana’ entered the top ten in the classical music charts.  His forthcoming recordings include a DVD with Diana Damrau and a CD recording of Mozart piano concertos arranged for harp, with Mozarteum Salzburg and conductor Ivor Bolton.

Joshua Collier, lyric tenor and Co-Founder of Opera Brittenica, is represented by Berger Artist Management and enjoys performing Opera, Concert, and Musical Theater works around the country, and with many of Boston’s musical institutions.

Comments Off on Celebrated Soprano and Brilliant Harpist To Collaborate