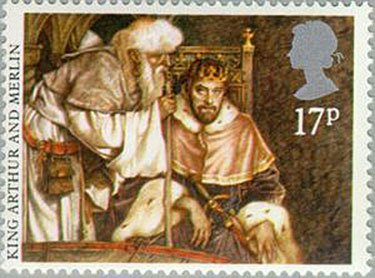 The notable contingent assembled at the Cathedral Church of St. Paul in Boston on November 19th to mount the rarely staged King Arthur by Henry Purcell and John Dryden included the (sponsoring) Henry Purcell Society of Boston, Jessica Cooper, director; actors from the Poets’ Theater, period instrumentalists from the Arcadia Players, and a roster of top-notch singers, several of them taking acting roles. In this semi-opera, the romantic heroes Lancelot, Guinevere, and the knights of the Round Table were nowhere in evidence. Instead, Dryden’s hero, aided by the enchanter Merlin and the airy spirit Philidel, led the embattled Christian Britons against the barbaric Saxon heathens under King Oswald and his wizard henchman Osmond. Arthur, pledged to the beautiful blind princess Emmeline, freed her from Osmond’s clutches after many vicissitudes, her sight having been restored by Merlin’s magic drops. With Merlin’s aid, Arthur defeated Oswald in single combat and imprisoned Osmond. Dryden tied up the plot with a concluding masque on patriotic themes sure to please his royal patrons: the final act promises the union of Britons and Saxons as one people while hailing the ascendance of British shipping, fisheries, and agriculture.

John Dryden (1631-1700), the leading poet and literary critic of his day, became England’s first Poet Laureate in 1668. His original King Arthur, written in 1684, a play in blank verse was intended to be “adorn’d with Scenes, Machines, Songs and Dances.” To please Charles II’s French tastes, the sung prologue, entitled “Albion and Albanius,” was expanded and set to music by the French composer Louis Grabu, but later abandoned. Like Dryden, his younger contemporary Henry Purcell (1658-1695) wrote for coronations, royal birthdays, and other aristocratic celebrations. He also composed numerous songs and extensive musical scenes for commercially produced plays. Purcell’s only true opera, Dido and Aeneas, on the other hand, received only private performances at court and at a school for young ladies. Dryden’s conversion to Catholicism during the brief reign of James II cost him his position as Poet Laureate after the Glorious Revolution in 1688 and the accession of the Protestant monarchs William III and Mary II. After Dryden returned to the theater full time, he and Purcell collaborated on a new version of the Arthur story, billed as a “dramatick opera.” The first performance of King Arthur, or The British Worthy took place at the Queen’s Theater, Dorset Garden, in late spring, 1691, in the presence of the new king and queen.

At the Purcell Society revival on Saturday, William and Mary occupied thrones at the back of the cathedral chancel, where they remained in silence throughout (except for soprano Erin Anderson’s participation in a single stanza of “Fairest Isle” toward the end of the play). Dressed in black and seated toward the front of the chancel was the “chorus” of a dozen singers, representing variously Britons, Saxons, shepherds, nymphs, spirits, and fishermen; several of them stepped forward as soloists. While Purcell’s six musical scenes are integral to the plot, most of the main characters—Arthur (Ben Evett), Oswald (Jason McCool), Osmond (Glen Moore), and Emmeline (Esme Allen)—did not sing at all but engaged in lengthy spoken dialogue in unrhymed iambic pentameter. Others, such as the opposing spirits Philidel (soprano Krista River) and Grimbald (baritone Sumner Thompson), filled demanding roles as both singers and actors. All had excellent diction: texts were spoken rhythmically or, in Purcell’s airs, choruses, and recitatives—always set with fine attention to the natural text rhythms of English poetry—projected with clarity. Trumpet fanfares and excited shouting and waving of swords simulated battle scenes, while brief projected titles kept us abreast of the ongoing action. Bob Scanlan’s imaginative staging made full use of the generous spaces of the neoclassical cathedral, with actors entering the chancel and progressing the full length of the nave to various locations such as a dark wood and a treacherous swamp. The ensemble of period instruments, located to the left just below the chancel, was headed by violinist Aisslinn Nosky, with continuo provided by Alice Robbins, viola da gamba, and Simon Martyn-Ellis, alternating between theorbo and guitar. Virtuoso playing was heard from Robinson Pyle and Jesse Levine on natural trumpets, Stephanie Corwin on bassoon, and oboists Margaret Owens and Priscilla Herreid, both doubling on recorders in pastoral numbers. Ian Watson, conducting persuasively from the harpsichord, held it all together, occasionally even wielding a tambourine to add percussive spice to rustic dances.

The opening scene of Act I introduces in spoken verse all the main characters on both the Briton and Saxon sides. Scene Two finds the Saxons solemnly offering a sacrifice to their god, Woden, in preparation for impending battle. Here, just as in Purcell’s Anglican verse anthems, solo verses alternated with short choral responses and longer contrapuntal choruses. The act concluded with triumphant rejoicing by the victorious Britons in fast triple time. Stefan Reed sang the tenor solos, outstanding for his artful phrasing and clear enunciation. In the first of Act II’s two scenes, the Britons pursue the defeated Saxons, but the evil spirit Grimbald (Sumner Thompson) leads them astray into perilous bogs and marshes. The delicate staccato singing of Philidel (Krista River) and the spirits finally wins out over Grimbald’s insinuating deceit. The second musical scene is a pastoral entertainment for Emmeline as she awaits Arthur’s return. In the opening air tenor Stefan Reed, exquisitely accompanied by guitar, gamba, harpsichord, and two recorders, extolled the pleasures of the shepherd’s life in lilting tones.

The famous Frost Scene dominates Act III. Osmond, whose advances the captive Emmeline has resisted, conjures up a vision of a frozen country in order to demonstrate love’s power to melt the coldest heart. Invoked by Cupid (soprano Sarah Yanovitch) in an ornamented recitative, baritone David Kravitz appeared as the Cold Genius shivering in frosty white, complete with fur and glittering icicles. Kravitz’s performance of the chromatic aria “What power art thou” was a slyly comic tour de force in its gradual emergence from a breathy staccato whisper to a ringing C major affirmation as he recognized Cupid’s power (“Great love, I know thee now”). Act IV is all about the power of love, as Osmond’s spells become sexual temptations. In a mellifluous duet, sopranos Nicole Estima and Kathryn McKellar as river sirens tried to lure Arthur into joining them in nude bathing. The great passacaglia that followed was another paean to love: a four-measure bass pattern, repeated some 59 times in various guises, and set to solos, duets, trios, choruses, and instrumental interludes.

Arthur having finally defeated the Saxons and forgiven Oswald, it remained in Act V to celebrate the union of the two peoples and the glory of Britannia. A sudden storm at sea was the vehicle for a virtuoso bass aria sung by the excellent Bradford Gleim. Pan and a sea nymph (David Tinervia and Sonja Tengblad), echoed by a chorus of fishermen, hailed the gastronomic  superiority of British fish. In “Fairest Isle,” Venus (Sarah Yanovitch) celebrated the island’s beauty with lilting sweetness. In an inspired touch, the hitherto silent Queen Mary (soprano Erin Anderson) rose from her throne to deliver a single stanza. A duet representing female and male views of love, beautifully sung by soprano Jessica Petrus and baritone Jacob Cooper, was followed somewhat incongruously by a trumpet tune and chorus praising the reigning sovereign. All participants took their bows during the concluding grand chaconne.

Comments Off on King Arthur: Chaconnes and Chivalry