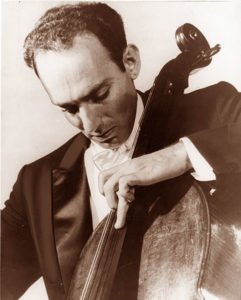 “Possessed of a certain glamor”, reported Michael Steinberg in the Globe in 1964 of the BSO’s new 32-year-old principal cellist Jules Eskin, who died today in Brookline, of cancer at 85. Of his debut, some months later, in the Brahms Double Concerto with concertmaster Joseph Silverstein: “Eskin’s tone [is] warm…. His style is chamber-musical, rather quietly inflected…. He resisted all temptation to force or to inflate his playing, and it was in its quiet way playing of impressively sensitive responsiveness and intelligence”.

Eskin played for five different BSO music directors, including Erich Leinsdorf, William Steinberg, Seiji Ozawa, James Levine, and current music director Andris Nelsons, and performed as soloist on numerous occasions. He occupied the Philip R. Allen Chair, endowed in perpetuity. In addition to the Brahms, Eskin was featured with the orchestra in Strauss’s Don Quixote, Bloch’s Schelomo, Beethoven’s Triple Concerto, Schuman’s Song of Orpheus, and concertos of Barber, Dvořák, Haydn, Saint-Saëns, and Schumann. He participated in the orchestra’s many tours, including the historic one in 1979 to China under Ozawa. Major repertoire in which Eskin served as principal under the direction of Nelsons included Mahler’s Symphony No. 6, Strauss’s Ein Heldenleben, Prokofiev’s Romeo and Juliet, and Shostakovich’s Symphonies 5 and 10, the latter of which won the Grammy Award for Best Orchestral Performance last February.

He was a founding member of the Boston Symphony Chamber Players, which Leinsdorf established in 1964 and which was the only chamber ensemble made up of the principals of a major orchestra. With them Eskin toured throughout the world on numerous occasions, including the Soviet Union in 1967 and South America in 1998. He recorded extensively in repertoire ranging from Mozart to Gandolfi, most recently appearing on the ensemble’s 2016 BSO Classics release of serenades by Dvořák and Brahms. The ensemble’s Profanes et Sacrées: 20th-Century French Chamber Music, released in November 2011, was nominated for a Grammy. Eskin and the Chamber Players celebrated the group’s 50th anniversary with a series of special programs during the 2013-2014 season.

Before the BSO, Jules Eskin spent three years as principal cello with the Cleveland Orchestra under George Szell (playing the standard-setting third-movement solo in their historic recording of Brahms’s Piano Concerto No. 2 with Leon Fleisher) and seven years with New York City Opera.

Born in Philadelphia in 1931, Eskin had his first cello lessons with his father, Samuel Eskin, an amateur, but by the age of 16 had joined the Dallas Symphony Orchestra under Antal Dorati. Eskin studied with Janos Starker in Dallas and later with Gregor Piatigorsky and Leonard Rose at Curtis. In 1948 he was a fellowship student at the Tanglewood Music Center, performing in the TMC Orchestra under Serge Koussevitzky. In 1954, Eskin was awarded first prize in the prestigious Walter Naumburg Competition and gave his New York Town Hall debut, leading to an extended concert tour in Europe. He also participated in the Marlboro Music Festival and played with the Casals Festival Orchestra in Puerto Rico. In addition to concerts and recordings with BSCP, his chamber music collaborations included appearances with Isaac Stern and Friends, the Guarneri String Quartet, and others.

Andris Nelsons said, “It is so terribly sad for all of us in the Boston Symphony family to hear of the passing of our very dear Jules Eskin, a treasured member of our Family and a legendary cellist of the orchestra for 53 years. I feel so honored to have had the privilege of working with Jules during my first two years with the orchestra. With his incredible leadership of the cello section and the profound link he provided to the past—back to his days as a Tanglewood Music Center Fellow, under the tutelage of the great BSO genius Serge Koussevitzky in the 1940s—Jules brought the orchestra such a wealth of experience and influenced its glorious sound for more than half a century, a staggering commitment for which we owe him so much. I will never forget my amazement when during an early rehearsal for our first tour together, in September 2015, Jules spontaneously started playing the solo cello part for Strauss’s Don Quixote—one that would eventually be played by the wonderful Yo-Yo Ma. All of us who were there—myself, BSO members, and staff—were overwhelmed by the beauty, power, and richness he so effectively conveyed in what is considered to be one of the most difficult works for cello and orchestra. … Our heartfelt condolences to his family, who we are thinking of very often at this time of great sadness.”

BSO Managing Director Mark Volpe added, “There is no doubt that Jules Eskin will be counted as one of the legendary cellists of the 20th and 21st centuries. For more than half a century, Jules Eskin has led the BSO cello section in thousands of concerts, among them landmark performances…. His countless performance and educational accomplishments over the course of 53 years, as well as his role as a founding member of the Boston Symphony Chamber Players, will take a prominent place in the orchestra’s storied history of major accomplishments, and his loss will be felt by the classical music world at large for generations to come. We will greatly miss Jules’s paramount musicianship and steadfast presence, as well as his equally legendary sense of humor and strong spirit of camaraderie with his orchestra colleagues. We send our deepest condolences to his family, especially his wife, BSO violinist Aza Raykhtsaum, and we will hold Jules’ memory in our hearts and minds for years to come.”

BSO Concertmaster Malcolm Lowe: “I want to celebrate Jules’s life and acknowledge the huge loss that I feel. No words can express the great joy Jules gave to me through his playing or impart the sadness of his passing. If only I could write a ‘Song Without Words.’ Jules embodied the heart and soul of our string section. He had an inspired musicality and infallible instinct coupled with a masterful understanding of the cello, its sound, and its role in all of the music that we played. His sound was always present, always poignant, and always incredibly moving. Jules was a great personal friend and colleague. I will miss him dearly and I treasure every moment that we had together.”

Yo-Yo Ma: “Jules Eskin is a legend in the cello world. A role model for me, he has always embodied the best of what a cellist could be: a consummate musician, as a solo artist, an ensemble musician, and as principal cellist of the Boston Symphony Orchestra for 53 years. His life in music was filled and sustained by the love of his wife Aza, the roar of the engines of his sports cars, an almost Herculean ability to do chin-ups, and of course the comradeship of his fellow musicians in the Boston Symphony Orchestra family.”

Arnold Steinhardt, founder and first violinist of the Guarneri String Quartet (1964-2009): “Jules was a close friend of mine for over 50 years, and he was a wonderful cellist and musician, but above all, he had an uncanny ability to pull at your heartstrings when he played. I think some of the most beautiful sounds that I’ve ever heard came out of his cello. I will miss him as a friend greatly and I will certainly miss his one-of-a-kind cello playing.”

An interview by Brian Bell is here.